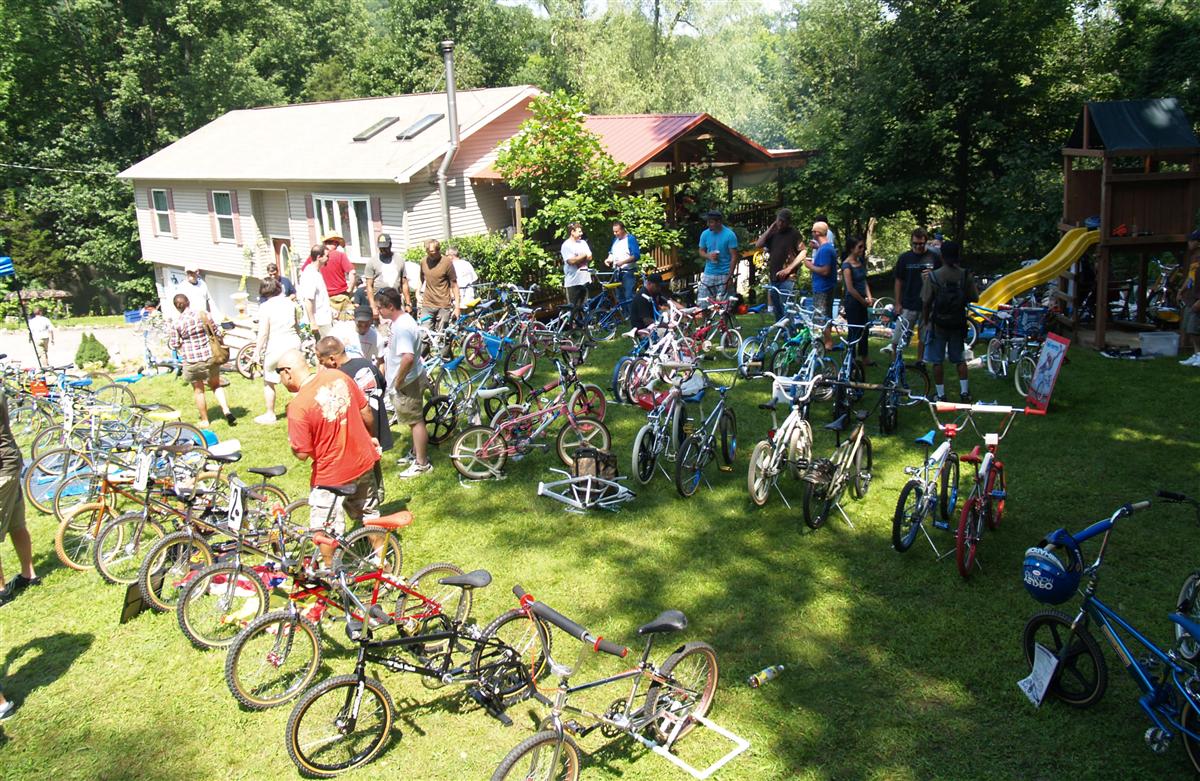 I can”t believe it took me 5 years to get to this now classic NJ event but I gotta say better late than never! Year 5 of Brian Pleva’s Old School BMX
gathering went down this past Saturday right there on his front yard in the valley of mountainous Northern NJ. BMXers from all over the country converged in Glenwood to hang out, show off their historic scoots, shoot the b.s., trade parts and generally have a good, stress free time. Brian and his wife Joanne are super gracious hosts and they really bring out the stoked feeling that permeates throughout the day there. The get together this year was more monstrous than ever with well over 100 old school rides all over the yard. There were even guys set up selling and trading the old school goods right there on the lawn. It was almost BMX Oldschoolstock but without the mud.

I got there about 12:30 expecting to be one of the first few guys to arrive but I couldn’t have been more wrong. By that time almost the whole front yard was filled with the BMX steeds, I was in BMX OS overload,

…and loving it. (Is that a line from Get Smart?)
The thing all of us old guys have in common when we get together is an uncanny ability to talk our arses off about BMX. As much as we used to session for hours at a time when we were young, when we get much past 36 or so, we just go on and on about BMX, it’s past, the present, parts, and what it means  and meant to us.

As I wandered the BMX wonderland that had sprung up on the Pleva’s frontyard, I really began to get that super feeling of being a kid again and seeing that fave ride in my local bike shop. One of the regulars at BMXNJ, Dave Dechert had brought out a Mongoose Moto-Mag and all his old Factory Shimano gear to show the dudes who had shown up. This was Dave’s first time chiling at an
event like this and it was pretty cool to see someone who had contributed so much in the early days of the sport get stoked on seeing all the bikes he had ridden back then. Later in the afternoon, njbmxracing.com’s racing owner Raiden Bill Hayden stopped by with his girl and daughter to soak up the good vibes. The stories of the early days began to fly like crazy and it seemed like it was 1983 all over again but this time with none of the stress of worrying about what would happen after the gate dropped.
I wandered around most of the afternoon and kept telling myself that I had to get rolling because a comp was going down in Hackettstown the same day but the nostalgia there was too much and before I knew it, the time was almost 4:00 o’clock. Before I took off to see what the younger generation of riders were up to, I checked out a few of the rides that really brought back big memories for me. (In retrospect the memories were probably helped along by all the classic 80’s music playing from the Slam-Pod, LOL!)

A pristine Nomura, just recently featured in BMX Plus!, one of the craziest jumpers I knew from the armory days and one time General Bikes manager Phil Finkle rode for them. A replica of Bob Haro’s original freestyler with that #1 plate affixed to the Vector bars. Blood Pro and Osborn Pro replicas that reminded me of the good times I had with the General guys and Harry Myers. Thruster bikes! More than a couple were there. The early 80’s, Northern NJ staple repping Wayne brought back to life by the historians of our sport.

Sorta funny how the freestyle and race bikes were mentioned evenly above because that is something that also permeates these kind of events. Racers and freestylers hang and laugh together, no drama or stupid comments just good time and memories of what we all enjoyed as kids.

Of course as kids, bikes were enough to keep us enthused but as we get older we all seem to have that urge to want to chow down and drink up! Well the Super Pleva’s had the mondo grill blazing all afternoon and must have spent a good bundle feeding those hungy BMX maniacs…I swear, we ate less, when we rode more! Burgers, dogs,
corn, too much good stuff to mention it all on this here little site. There was even a little brew flowing for the older guys. Not only that, but Brian unveiled his own “Slam-ale” micro brew that
evening. Always something new from the minds of the BMX crowd, young or old, the brain is kicking in the “what if” mode.

After saying to everyone about 20 different times, that I had to leave, I was finally able to break away from the relaxing atmosphere of Slam 09 to head to Hacketts. I packed up my Summerslam 09 hangtag, grabbed the photo and video equipment and got the PT heading south.

Heading down to the comp that afternoon, it really dawned on me how innovative the BMX crowd is. 35 years ago who would imagine that we’d be hanging at our own houses showing off the rides we loved as kids, just like the classic car enthusiasts do. Events like this really are pushing the envelope in showing that BMX is not just a sport for kids but a past time that is enjoyed by people of all ages who just want to get down and let their creativity flow.

As an aside before I get done spewing my verbage, everyone should know that super NJ BMX photog (and rider… and Dig BMX editor!) Rob Dolecki stopped by and it seems that Brian’s OS Shop will be on Dig’s site soon! Props to Brian for repping the NJ scene like it should be, with fun and a good time for all.

I’m looking forward to Summerslam 2010 and whatever Brian brings to the table next year for a good time.

I’m also looking forward to all the other plans he has a brewing….and they ain’t just Slam-Ale…