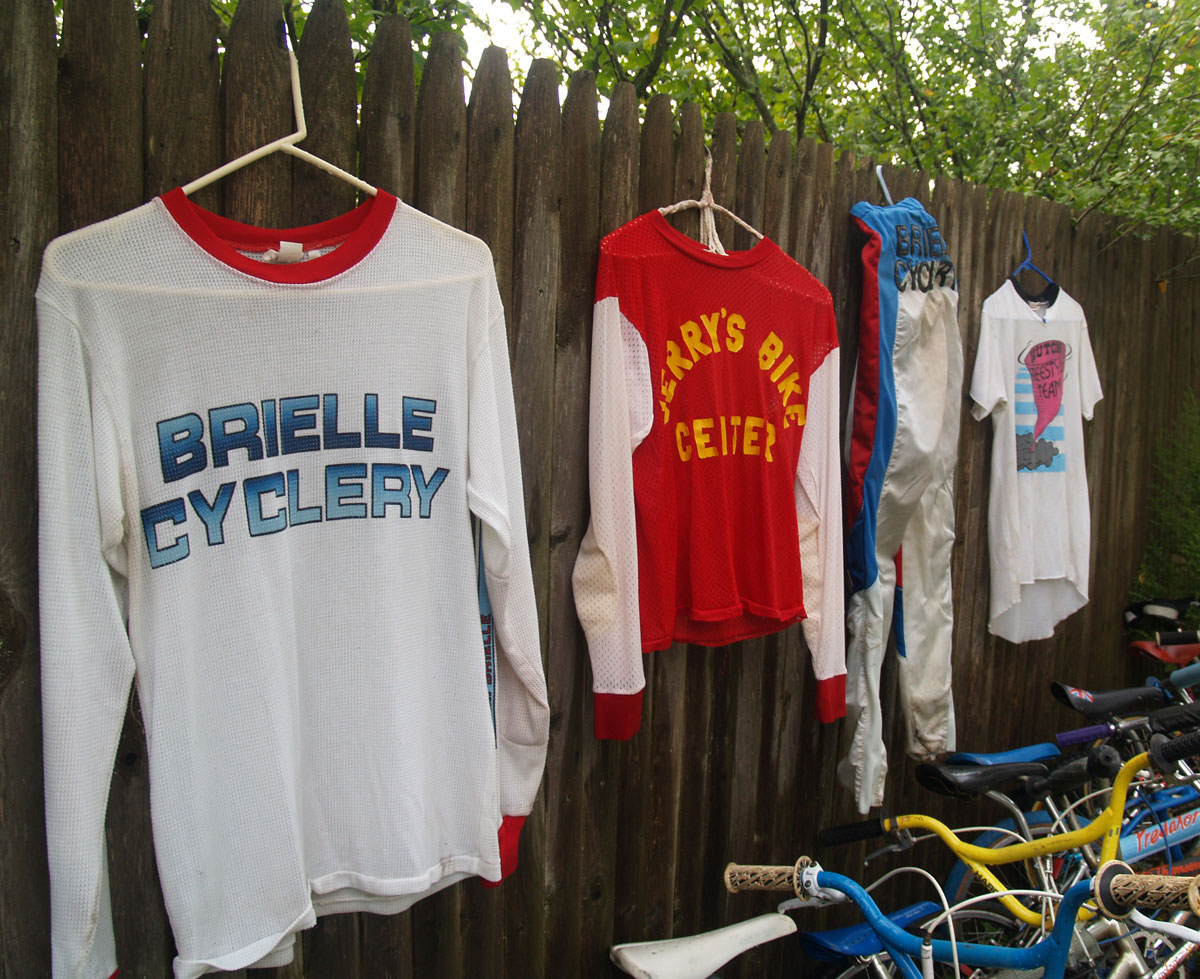 Although I didn’t think I’d be able to squeeze on over to Brian’s second annual fall OS BMX BBQ, plans got jangled around at the last minute and the afternoon opened up
so I could get over to say hi to all the players in the OS scene in NJ. As stoked as I was to be able to say hi to everyone, mother nature had other plans. The skies opened up that morning and let loose a torrent of wetness all over the Jackson area. In typical BMXer fashion though this did nothing to slow down the BMX festivities and the Biels forged ahead with a good day of BMXin’ fun. Christine was finally able to hang out with me for a few hours with everyone so rain be damned this would be a fun couple hours!

I was stoked to be back at the Biel homestead and see all the guys who have kept the history of this sport alive over all these  years by keeping all the BMX rides of yesteryear in top condition. Brian B had his unreal assortment of Old Schoolage all over the side of the yard. The line of history that he has is very cool to see. From 70’s Yamaha BMX mono’s to CW freestyle bikes, HARO’s, memory lane just springs to life in  your mind as you suck it all in. Christine and I were also able to sneak over to his massive garage of history where he stores all the stuff in the off season and check out his motorcycle collection as well. I never had the testicular fortitude to bust loose on a bike with an engine but Christine, who had her own KX125 back in the day was in hog heaven checking out all the moto-x rides in there.

For added funatude this year Brian built a small flat-street area in his yard that looked to be lot of fun. The kids were out there shredding it although with the wetness the older guys took a chill and wandered about checking out all the great OS eye candy that was chilling there. Brian P from Summerslam was down and had a few rides to show along with some pieces of his collection of 80’s radness. Chromey was there, the still shreddable HARO master tucked safely away in Brian’s garage awaiting some better weather. Dave Dechert brought the old motomag mongoose to show off. Even DocJr rolled up from South NJ to shoot the tales of yore
with the rest of the old school guys. Doc was also holding a raffle for his BMX team to help them get on out to the president’s cup this December. All told, there was probably over 250 years of BMX experience in the Biel’s yard that afternoon discussing BMX, the glory days and it’s future.
I wandered around for awhile talking to all the great guys who come out to these events and even meeting some of the guys who were at my old school BBQ waaaaay
back in ’05. Christine and I had to head on out to Asbury so unfortunately I didn’t get to see the scoots that won the awards for the best of the day. Brian once again had some cool pumpkins as prizes for the winners. Pretty creative and different from the norm… but what do you expect from people who grow up riding the BMX and doing their own thing. I had to leave early with Christine so I got a few more pictures in said some goodbyes and rolled out of Jackson. We had a killer time with some great hospitality from the Biels. Hopefully Brian will be down to put together another event in 2010. Thanks to everyone who said hi to me and Chris and I hope to see you guys again at the next event!