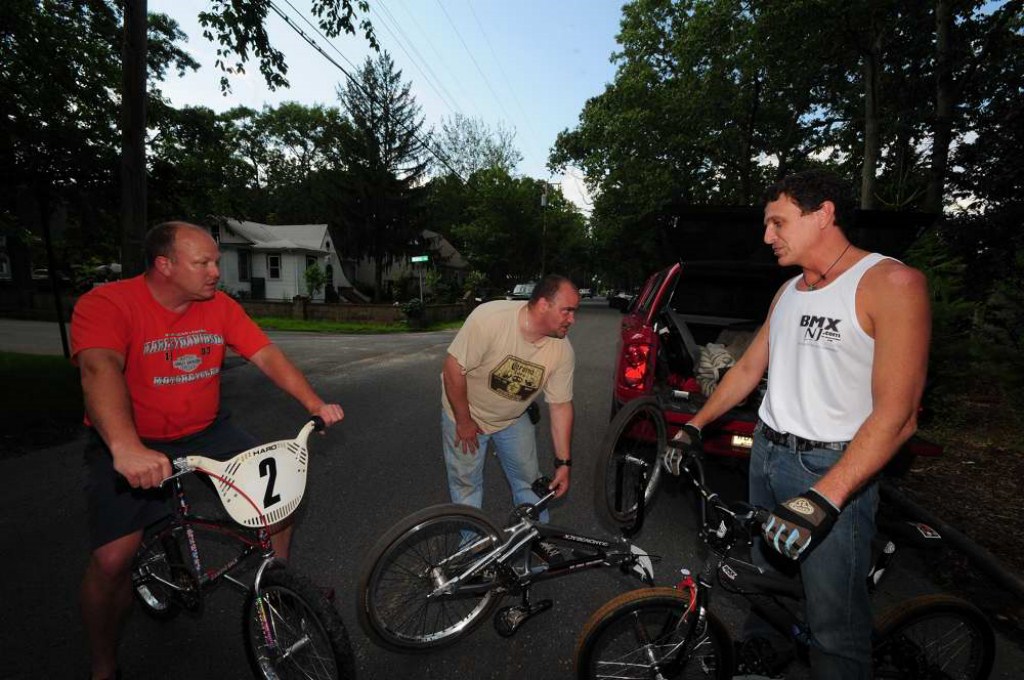 Rain, rain, rain….oh and more rain. By the time Thursday evening rolled around I had just had the track at the Woo Woo set up for the BBQ on Friday and it had actually gone two days with no rain. Well…Christine and I went out to eat that night and by the end of the meal, the gnarliest storm clouds I have ever seen rolled in. Guess what, TORRENTIAL rain. By that point I had been brought down enough that I figured, man I will be lucky if I show up at this thing, let alone anyone else. Bummed isn’t the word! Christine dragged me out in the torrents to get some eats and stuff but I was fully convinced that no one would even show. The next day dawned with sun and a devastated track. I got up at 8 and started to try to fix it so in case anyone showed up they would have something to do other than have me boreass them to death with tales of the BMX days! LOL. I finished up by noon and headed out to get propane. As I was at Home Depot, the phone rain, it was JSteady, Jonathan Stettler, saying he was there and asking where to park. Holy cow, I though, someone showed up! I headed home and by the time I got there Budz from Global-Flat showed up. We b.s.d for a bit and then headed out to a lot I wanted to show them where I thought it might be good to do some flat jams or contests. We rode for a bit, got a call from the little lady and it seemed Dave Dechert, the man from “The East Coast Is The Right Coast”, had also made the trek. He was down and it was looking like it might not be a total bust for a decent little get together of guys who represented different aspects of BMX. The front porch was used for a good 45 minutes as an impromptu couch and we talked about the lifestyle like old maniacs remembering how we got to this crazy place. The phone rang and it was Raiden Hayden on the other end. The main man of NJBMXRACING.com was heading down with his gal Kathryn and his little girl Krystal, they were finishing up a day of racing at HC and figured, what the heck let’s see what’s going on down there.

Well, right there it seemed like my stress of having no one at all showing up could finally fade as well as the haunting thought of having 50 people at our place with no idea what to do with them! LOL So it had turned into an afternoon of good guys and gals chilling about life and BMX. When Bill arrived we headed to the basement and I showed everyone the “brokenspokes” studio that was set up. Bill plopped down in the hosts chair and started rambling crazy stories and other stuff that had us rolling and actually made me think that this whole web show thing will actuallly work! Crazy. We swapped more stories then headed out to the back deck to get a few more bites of grub and some liquid refreshment. (Much thanks to Dave for the stuff he brought down!) After an hour or so of old BMX war stories and JSteady snapping pics of the 4 dogs of the apocalypse, we all headed over to Bill’s truck to check out his old school ride that he had for Flemington. Bills daughter, Krsystal tried the track, but since it was more like spongecake than a track, it was a bit too much, LOL. We spent the rest of the afternoon hanging, talking and riding a bit in front of the house while Jon snapped pics and Hayden passed…other stuff.

Of course in true current NJ fashion, it slowly began to drizzle while this was going down and we headed back into the Woo Woo to wrap it up. More funny stories and a commitment to try it again sometime was made with all of us. Dave headed out first back up into the land of Budd Lake and Windsor Trails, Bill took some directions over to Point Pleasant to have some fun with his gal and daughter. Jon and Bud though hung out till later in the evening as we discussed ways to bring some more life back into the realm of flatland in New Jersey. These guys are incredibly motivated to make things happen and have the talent to bring it about.

With the evening winding to a close we parted ways but made sure that we would go for more stuff in the future. Look for much more expanded coverage of flat in BMXNJ in the future, as well as JSteady heading up to more events. Oh and for anyone who wants to know more about Dech, Bill, JSteady or Bud, well…click on their names it seems they’re all making things happen in the BMX world. There’s a few shots of the day here and for all of JSteadys shots click here.

See you at the next party, event, jam, good time happening…or maybe even trail session.