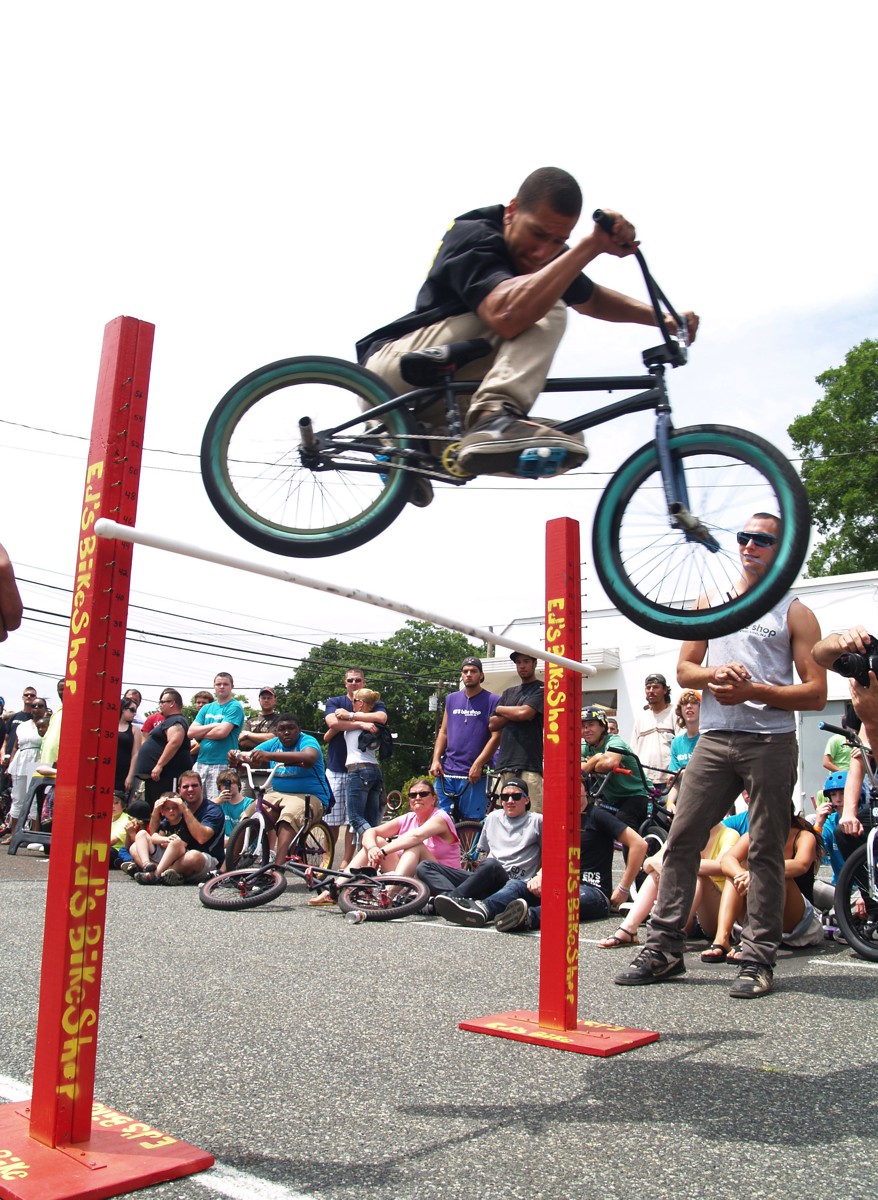 Year 3. Having missed the inaugural Ed’s Games in 2009, I have made it a point to never again miss this killer event in the heartland of South Jersey BMX, Vineland. For those of you who don’t know what is going on there, down in Vineland there is a shop that is 100% BMX with a vast history in the sport right back to the days of Millville and the first races. The shop’s name is Ed’s BMX Pro Shop run aptly enough by Ed Abbot and his wife Carol. For the past few years they have been building a monster reputation as the shop to go to in SJ for BMX. The place is amazing and is a must see for anyone who is into BMX in NJ. Imagine wall to wall BMX parts of every type and size imaginable with a constant flow of BMXers in and out all day and you might have some insight into what Ed’s is about.For year 3 of Ed’s Games more than a few company’s reps came out to chill and see what this scene was all about. Jim Cielinki of Sunday Bikes, Leigh Ramsdell-Eastern, Van Homan-Fit, Robbie Morales-Cult…When you pull in those names and their corresponding pros you know you are doing something right. It was also very cool to see Van there with the 2×4-Fit spine donating his time and ramps to help make Ed’s Games even better. That’s what this BMX thing should always be about, everyone working together to make the whole scene as big as it can be.

Since we are b.s.ing about ramps it should be noted that Ed went even bigger this year and put an extension on the grind box, built a spine and wedge as well as a ski jump and a couple more grind rails to give the shredders a place to bust out on. Oh and he got part of the lot paved to make the area to ride even better. The man knows how to make an event memorable.

We rolled up to the scene about 11:00 am and there were already close to 100 people there milling about and getting the job done. We met up with Ed and he told us about the tons of food, drink and prizes he had to give out that day. Vitamin Water was good enough to supply tons of drinks and coolers were scattered about for anyone to grab what they needed to stay hydrated. As usual Ed was ear to ear smiles and having a good time making a happening day even better.

George Hoernig, who has been cool enough to help out with BMXNJ as of late, was out talking up the locals and getting some more info on the scene. Looks like we’ll be doing more with the South Jersey crew in the future from what he tells me.

The amount of local riders there was nuts. Mike Paton, “unofficial mayor of Delmont”, Kevin Little, Dan Hodgins, Frankie Day, Frank Lynn, Albert Carlson, Ant Bolash, Courtney Freeman, Steve May, Chris Przywara, Brian Coulter, Anthony Maimone, Erik Sammartino, Brandon Bermudez and soooo many others all were seen mixing it up on Ed’s course. Lots of guys made the trek out to get down, Matt Leviege, Mark Fraunberger, Nick Seabasty and Mike Almodovar, Corey Bergler, Keith Schmidt, were all down to rock it on Ed’s ramps from places other than the SJ hinterlands. When you can pull riders from all over NJ and East PA for a “little jam” you have something purty special going on in BMX land.

Even though Ed plays it pretty mellow with regards to rules and times, the man still played it tight enough so that everyone had a good time and left wanting more while keeping the comp part of the jam moving along at just the right pace.

I’m not gonna go into a big recap here on BMXNJ as we have the grind jams and best trick jams on video for brokenspokes.

Highlights from the grind box jam which was improved with a longer box this year included Matt Leviege and Mike Paton, both winners from past years at Ed’s showing up to throw down again at Ed’s but unfortunately missing the mark this year. These guys were trying some pretty advanced moves on the box which involved bar spins in some pretty weird spots, if they were pulled the placings would have been different for sure. Barring that though, the big story was “Little” Nick Seabasty pulling down an ace for his grind action. Nick has the icepicks on the proverbialist lockage downarino and was busting them looooong and into variations. You’ll see in the footage. Mike Almodovar was also killing the icepicks and showing SJ what CNJ is up to.

Next up Ed with the help of Frank Lynn and Brandon B pulled out the bunnyhop bar and began the task of weeding down the riders into those who could pull up the bars and hike their bike as high as possible without using a ramp. It’s sorta old school but everyone knows that feeling of what it means the first time you get the bike off the ground just by pulling on the bars and hucking that mug…it rules. Bunnyhopping is a test of strength and finesse, pull up too early and too high you are looping out, too late and you are nose casing plastic…plus as we all know it’s easier to bunnyhop ONTO something than OVER it. Matt Leviege came out with some crazy stuff early on busting out 180’s over the bar but was eliminated when the heights started getting into the 40″ area. Courtney Freeman barred the…bar being another man tossing tricks out there. Eventually everyone got wittled down to Eric Sammartino, Courtney and Ricardo Ferrera. Eric bowed out at 40″ even, while Courtney and Ricardo kept inching up the bar to the mid 40’s, at 46″ things started getting nuts. Then Frank Lynn and Brandon B notched it up to 47″, Ricardo used some massive body english to move over the bar giving Courtney the challenge to match it and this time out…he wasn’t able to. Ricardo took home the ace and some swag for clearing 47″. Big.

Some more jam time and Ed started up the best trick part of the games. Basically everyone was allowed to use whatever ramp or ramps they wanted to bust out their best stuff on, barring the grind box. Things got pretty nuts pretty fast. Anthony Trimble flew across the lot and blasted all the way across the wedge and BOTH spines, mega distance. Hyper’s Keith Schmidt was cranking lookback flairs, Bryan Coulter was a madman with the footjam nosepicks on the 5′ 1/4. These guys were going awf! Flairs, double whips, bar tailtaps to bar in, best trick was a smorgasbord of BMX trickness. After having blasted across both spines, Trimble came back and did it AGAIN but this time tossing in a tuck no hander to seal the deal. It looked like this was gonna be the trick of the day. Ant Bolash pushed Trimble with a BIG fufanu on the back rail of the ¼ straight to a 540 over the spine, then Bryan Coulter got tech to the max with a bar footjam to bar in. The judges milled about looking like they were going to give Trimble the 100 greenbacks for risking life and limb with that monster transfer when Corey Bergler began to attempt a tailwhip to icepick on the ¼’s sub box but turned on end so the top was 6’ above the deck.  After a few attempts he got it, the judges politely put band aids on their now scraped jaws from hitting the ground and announced Corey the trickmaster of the day. In the end it came  out as Corey 1st for whip to icepick on the sub,  Anthony Trimble 2nd for the bio no hander tuck across the spines,  3rd to Ant Bolash with the fuf to 540 and 4th to Coulter and his bar footie to bar in. Everyone out there was showing incredible originality with their tricks including handplant 180’s over the spine, NUTS!  Big airs, tech tricks, crazy lines, it was all there at Ed’s.

It really is a testament to the greatness of the South Jersey scene that the local bike shop can call a “small” jam and have companies and people show up from all over to basically just have a good time. Big props to all the companies that donate stuff to Ed for the day bringing down the house with good will. Animal/Skavenger, Cult, Ebius, Eastern, Greenhouse BMX, Hyper, Kink, Blackout Distro, 180
Distro, S&M, Fit, Sidewall Distro, Sparky’s Distro, Sunday, System Cycle, Odyssey, Profile, Tip Plus, Primo, QBP, Vitamin Water, support them guys that support your LBS!

The day wound down with a huge raffle where everyone present got a ticket and all the stuff that was sent in by the companies above was given out by Ed and Carol with some help from the pros and company owners that were there.

By the time we left everyone was wandering around smiling, and stoked on BMX. It’s the enthusiasm and participation of a shop like Ed’s that really creates an amazing local scene and Ed along with his family and big team of riders should be given a lot of credit for helping make South Jersey a great place to BMX.

We’ll be back next year for Ed’s Games IV prepared as usual for another great  time. Look for more from Ed’s Games on brokenspokes BMX next month and BMXNJ Magazine this summer.

All the pics from Ed’s on the web are here: Ed’s Games III

Ed’s on the Dig BMX site

Ed’s on the Eastern Site

Ed’s on the Cult Site

Ed’s on the Animal site