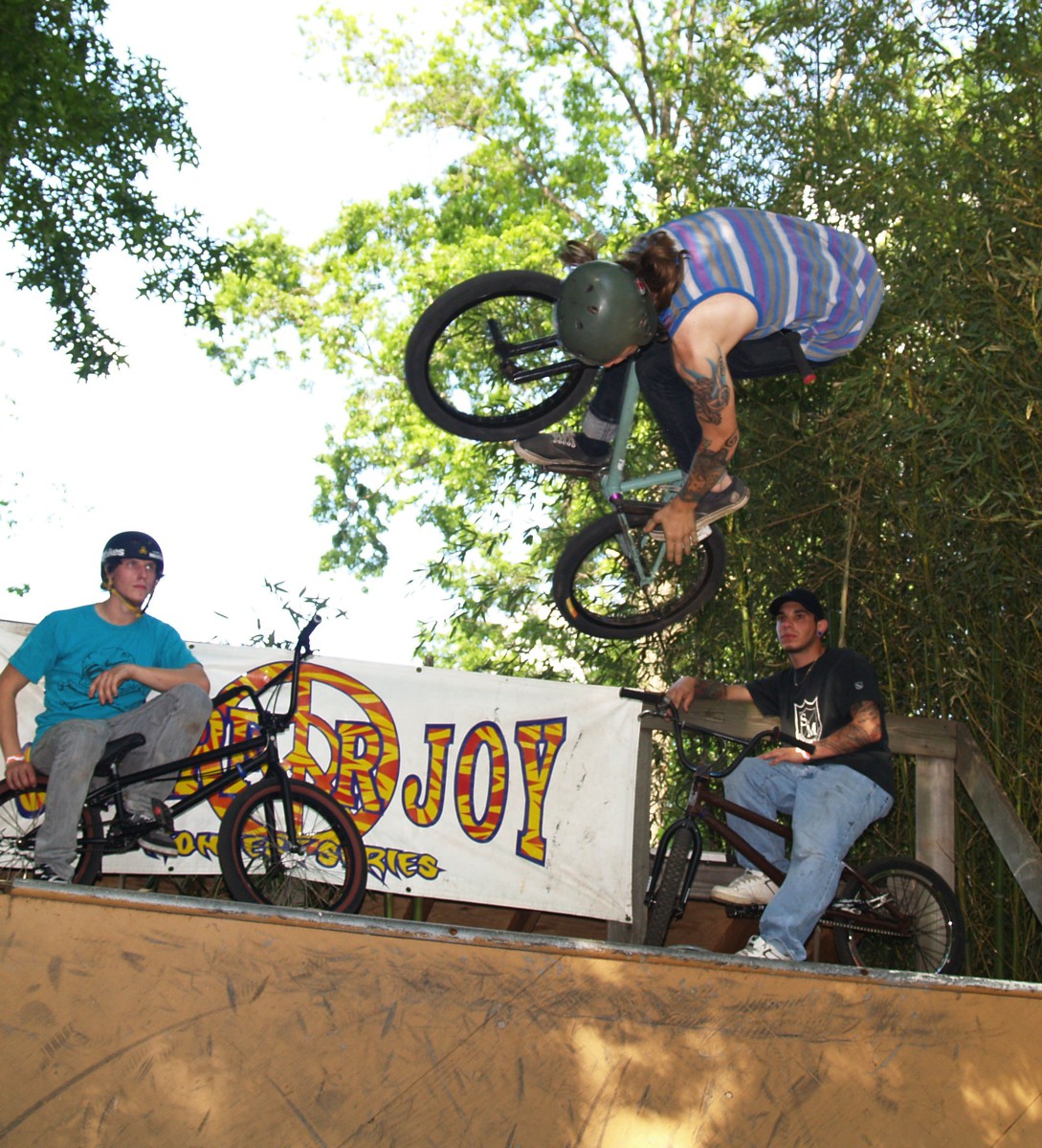 “Hippie” Steve Wisbeski has become the defacto go to guy for a good time with BMX in the Central NJ area. From the days of the early 90’s when he started Jump For Joy, through the travels to A.S.S Park  in Toms River, up to Hackettstown and now back to his hometown of South Bound Brook, when the words, “there’s gonna be a Jump For Joy going down”,  the riders come out.

For the second time in a row on Memorial Day Weekend they did just that and congregated in Steve’s full backyard ramp (well…actually sorta side yard) to ride, laugh, party and put out a little bit of a contest.

Since we’ve started BMXNJ Magazine last year, I’m not gonna go into a big recap of the 3 man team challenge, saving that for the video and write up in the mag. For the web wrap-up I’m just gonna go over the vibe of the weekend and the bigger stuff that was going down.

As usual Steve was able to garner a buttload of  prizes for everyone and brought out enough food and drink to feed a small army.

Which was good because Memorial Day weekend a small army of CNJ’s BMXers invaded Hippie’s “Compound” and put down some gnarly moves.

The ramp crew added a new super vert wall right past the jump box landing and it was getting heavily worked. Justin Toye and Chris were rocking out some big icepick moves on there.

Saturday was jam day. Everyone came out to have a good time, eat and shoot the b.s. about the now and the then. Many Old School names were in the house, guys like Adam Stack, Bob Ryer, Scott Demarco, George Hoernig were all seen milling about discussing the days before slammed seats and no brakes. Big tricks and big airs were being thrown out by Gary Nilsson, the Grove Street Bicycles Crew, Team WallStreet, Kobovitch, Grimaldo Duran, George D, Team LMNOP, and in usual Hippie Steve style a whole new passle of young rippers that we hadn’t seen before. The day was a good time even with a small rain shower that blew through and halted the jam for a little while.

Sunday dawned with dry weather and a dry Rodney Morweiser who spent most of the night before shooting the shite on BMX as well as staying shall we say…refreshed.

George and I got there Sunday about 2 with the hopes of seeing something never tried before in the NJ scene.

Hip had come up with the idea of having 3 man teams go for the gusto instead of  the usual couple of classes and individual or jam format runs. Although it was a little rough to get everyone on the same page and signed up, by that afternoon Steve had 6 teams ready to rock out and give the gathered spectators something new to talk about in the annals of BMX freestyle history in NJ.

Amazingly enough….it was pretty damn cool. Team S-Puncher had a killer 5 minutes with plenty of triples stuff that had guys flowing lines with trains and going over and under each other. Wall Street had the talent of Nilsson with them. Mango…well Mango had Mango. Over 30 was a crowd fave, especially with the ladies… Dossanto and Duran were tripping the BMX fandango and showing the young’uns that BMX begins at 30, it don’t end. Shout out to E-Whip Whitescarver who tossed a bitchin’ tailwhip across the wallride but tweaked his knee on the landing. Grove Street had one of Central NJ’s fave photogs flowing like water all over Hippie’s backyard and the major minor Chris Koval going real big…for a little guy.

In the end Steve just decided to give a 4 way tie for first with WallStreet, Grove Street, Slutepuncher and Over30 all sharing the top dog BMX team for the day.

It really feels like this idea has some cool merit for a new way to showcase BMX riding to the masses. The guys doing it had a good time and when you eventually see Slutepuncher’s runs you’ll see why. I’m picturing the day when all these guys are having a good time in front of a crowd paying mortgages riding BMX bikes doing what they love.

Highlights from the jam were George Dossantos just going BIG on everything. Geoff Meade and the roof ride. Gary Nilsson’s tech trick lines all over including the tailwhip to tailwhip footjam nosepick. Nick Seabasty tossing a 360 backwards over the box. There was just so much stuff going on that in order to truly understand it, you gotta be at it.

And I think that’s where we’ll wind up this web recap, the next time you hear “Jump For Joy is going down”, do what you have to do to get there and experience the longest running jam – contest series going in New Jersey. It’s worth the trip.

We’ll have more from JFJ 17 in the next ish of BMXNJ Magazine and brokenspokes BMX webshow, so stay tuned, as usual, to the only website dedicated entirely to the HUGE NJ BMX scene…BMXNJ