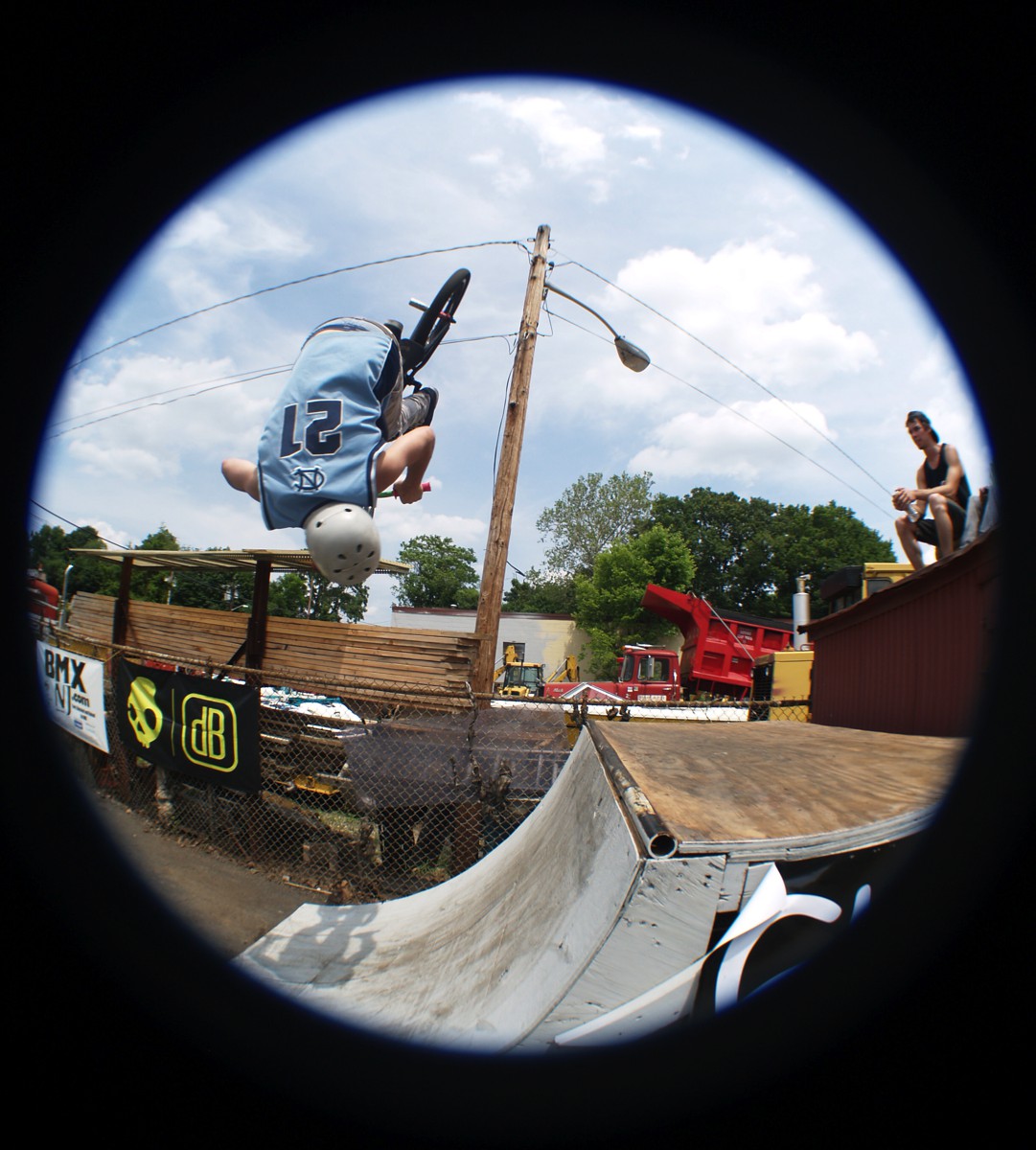 JPR Am Jam 2.0. Justin Francisco put out word that they were having another jam-comp up in Lyndhurst middle of June and word spread pretty fast that this would be another good time. Last years shindig brought out some crazy riding and did a good job of filling the gap for local comps left by the demise of Hackettstown. Justin and his crew along with shop owner and FMXer Jeff were good enough to put together some new ramps and open up the lot again to a passle of crazed BMX riders to let loose on the course. A new 6′ spine, banana ramp and step with rail were put together for this round. The assembled stunt masters seemed to be pretty stoked on everything and proceeded to throw down big time. The contest itself was easily double what it was last year and that is not counting the guys who just came out to  jam. Local heroes Mikey Almodovar and Nick Sebasty came out as well to chill with all the locals and have a good time. Jeff and Justin were also able to bring back North NJ’s reknowned BBQ master, Fabio from the BBQPitBoss. Everyone was stoked to be feed for nada for the day. Good food and good times, which of course brought great riding.

Practice went on througout the day and these guys who are “just local ams” are really stepping up the game at these local comps. Flairs, hops to tooth over grinds, 270 whip transfers, crazy transfer variations and the grinds that these guys get up to…it’s a whole contest by itself. Lotta names from last comp were there this time as well, Josh Serafin, Mark Fraunberger, Victor Devirgilio, Mike Colantonio, Denny Banger, Eric Schalles, Jesus Mongorires, were all there repping along with what had to be another 75 guys riding and chilling.

Justin broke everyone up into 5 heats, which then got whittled down to 2 semi finals and at last a 3 man Am Jam finale that rocked the house. Before we roll out the finals, gotta throw a get better bro to Denny Banger who attempted the first banger of the comp, jumping the wedge out to the sidewalk. He nailed the jump perfect and began to nose it in on the opposite side and would have landed perfect, but since there was no landing on the other side he took a massive digger to shoulder, chest and head…which would have been disastrous but since Denny was wearing the a helmet he was able to walk away from the crash. Props to the guy who was the first to prove you could get over that fence.

Since Justin and his gang kept the comp rolling pretty fast everyone was still there and pumped for the finals which was broken down to Mike Colantonio, Jesus Mongorires,  Mark Fraunberger and Eric Schalles. One 5 minute jam was to be the decision maker and everyone was allowed to romp the course and put down their best moves for the assembled judges. Big tricks were put down on the handrail and hubba like ice to feeble to hop over, transfer from the steps to the hubba with a double peg, tire ride to bar off, tire ride to turndown, too much to recount in a blog. The banana box was used with some great stuff like whips out of it, and 360’s. Colantonio was on a mission though with banger tricks like flairs, whips off the steps, whip off the tall side of the hubba…then Mike came outta nowhere like a BMX racer busting from a dropped gate and let loose a huge boost over the fence, clearing it and landing perfect, redemption for Denny’s crash earlier in the day. As crazy as that was he came back for more and stomped a monster tailwhip over that thing which brought the crowd to it’s knees. Everyone went ballistic, with 10 seconds to go it seemed the comp…was over and won.

After that the clock wound down, Justin called time, the judges confered and…gave it to the man who conquered the fence Mike Colantino. Jesus got the deuce and Eric brought home 3rd place bacon. Overall the comp was a good time and had a very mellow vibe. A big product toss occured after the event and JPR’s side lot was mobbed with BMXers grabbing at the swag. The owner Jeff said that he’s looking to do another one in the fall and as long as we aren’t committed (no sanity jokes please…) we’ll be there. If you get up in the Lyndhurst area go out and check JPR the guys do a great job supporting their scene.