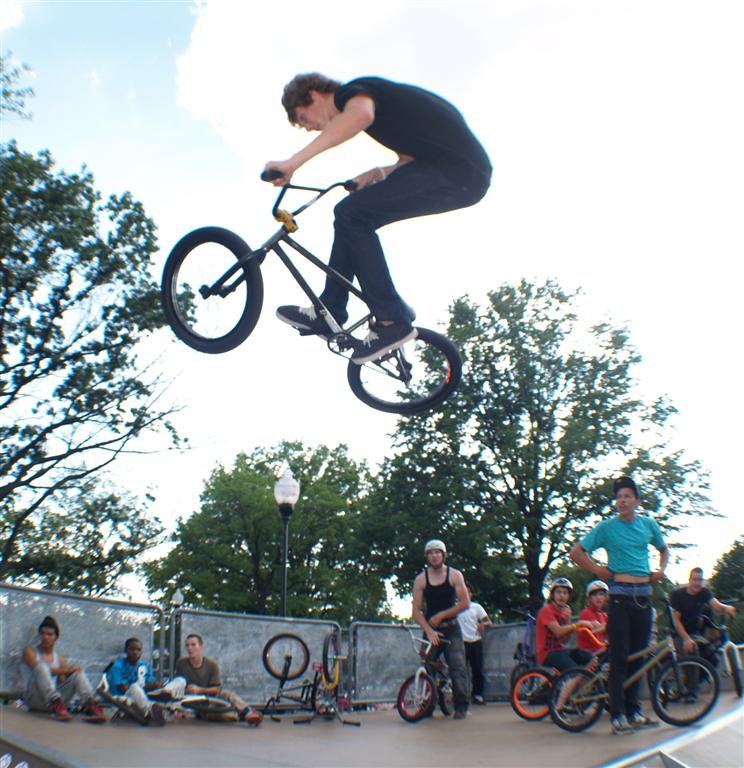 Last minute notice! Al is having round 1 of the annual Perth Amboy comps this weekend! A quick shuffling of a few plans and the BMXNJ crew was able to get up there to check the festivities. Al has a knack for somehow getting contests set up where the guys competing somehow do not have to pay an entry fee but yet still get cool stuff for prizes. This jammie was no exception. Practice was underway when I got there and since it wasn’t a super hot summer day, the riders were busting with some great stuff.

Being a local comp you don’t see as many of the huge tricks that you do in the bigger jams (even though a few of the NJ-PA shredders came down just to have a good time) but these guys were still busting out heavily. The street influence is really making a huge impact on the riding scene with less of the newer riders going as big as possible and sticking to more technical tricks like tons of grind variations, wedge inspired stuff, speed and flow. More the kind of riding you would do if you were out cruising with friends. Aaron was there once again helping out with all the duties so Al wouldn’t implode under all the stress that comes from pulling off these little shindigs for everyone. Practice went pretty smoothy and there were actually a good amount of spectators glued to the fence around the Perth Amboy Skatepark arena when Aaron said it was time to get the comp underway.

Cool thing about this comp was that no one was entering beginner! Every rider there, even the little dudes were at least signed up in intermediate. Al took notice of this and called all the guys over who were under 12 and sorta “convinced” them maybe it would be best if they all had their own class. They agreed and the 12 under beginner class was set up and ready to rock out….hip hop out? (Man I am losing touch with the times..) These little dudes were busting out on the course with tailwhips, transfers, grinds and all the major tricks of the day being thrown down. Just on a smaller scale. Very cool to see a new generation of BMX riders coming up on up and tearing up the ramps. The final low down was Kevin Santana 3rd, Jamesone 2nd, and JoJo 1st.

Around mid way through the young guns class our resident video-gal showed up, Deirdre Verdolino and got behind the lens to start filming for the new brokenspokes BMX webshow. As the intermediate class came on up the tricks got a little bigger and the crowd was definitely getting into the excitement. Jonathan Rosado was busting some great tricks and cool moves to Al’s sound system but could only muster up a 3rd place in the class. He’ll be back for Round 2 in August no doubt. Jesse V had the park on lockdown and looked like he wasn’t going to give any ground up on winning but Carlos came out just above him this day to get the win. Jesse had to settle for second. Great times in the intermediate class as more than a few of these guys had moved up from last year.

The Advanced-Expert class was next and with 12 guys entered, it was looking to be quite a showdown in the late afternoon sun there in Amboy. Big guns like Brian Hittle, John Ritchie and Mike Seawright showed up to keep everyone honest. After riding in the sun all day long and probably getting one gnarly case of sun burn these guys
were ready to tear up the course at P Boy. Hittle was doing damage to the corner of the mini with some pretty big flairs off the little quarter. He was also busting out some large no handers onto the deck. The Hit Man is used to much bigger ramps so he had to keep it a little subdued out there, no barrel rolls from him this time but with Hacketts 5 going down in August, it will be back to big tricks up there. John Ritchie was all over the course busting out for CJS and Alienation, cross footed backflips and a large superman off the mini were some highlights of the mans run. Big John was definitely on point that day. Mike Seawright came to the party late but was pulling some big barspins and whips out there. The Bulldog rider was flowing some good lines but he along with the shredders I mentioned above couldn’t crack the top 3. The final order in the big guns class went down something like this….well, actually exactly like this, the peace man, Ed Herbison was flowing like mad wearing the signature love helmet. He brought down the 5th. Gary Nilsson busted some big airs for the fourth. Mike K. was on it this afternoon and with few mistakes was able to squeak into the 3rd place position. Nick Sebass kicked some a** for the second place swag, some crazy transfers from Nick. Who won? None other than funky cold Medina Rex. Putting together runs that used up the better part of the park and having the crowd on edge the whole day kept the man on top of his BMX bros this time ’round.

After the comp, Deirdre did a little interviewing of the big guys and a BMX mom at the event for future use on the show and we had a little talk with the main man of Edison BMX, Al about the future of flatland comps in NJ. After that the BMXNJ crew loaded up the woody and hightailed it back to the HQ to get cracking on putting up more info about more events run by all the riders in the NJ-PA area.

Next comp at Perth is August 22nd, same time, same channel. Be there!

Ride that mug out,