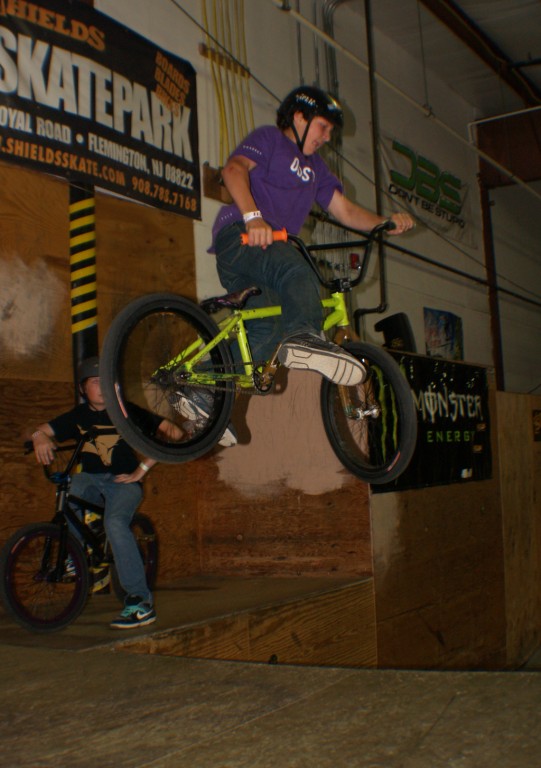 When we interviewed Aaron Graf last month he mentioned that Shields was going to have a beginner only comp coming up. It seemed that John Ritchie wanted to give the guys who never competed before a chance to do their own thing without the added pressure of watching some of NJ’s best riders tearing up the course while they were practicing. The guys were able to line up a decent amount of sponsors with CJS, Monster Drinks, Big Diesel’s Bike Co, Alienation, Animal and Efingers letting loose with the prize swag this time around. 4 classes split up the riders between age groups this time instead of proficiency, 8 and under, 9-11, 12-14 and 15 up were the delineations of the day.

BMXNJ as usual, got there late, as we were up till the wee hours the prior evening working feverishly on the new Brokenspokes BMX studio in the sub-basement of 461 Silverton. When we arrived though a pretty decent contingent of beginner riders were out there ripping up the park as 9 to 11 practice was going down. (yea we missed the small dudes but were able to get the scoop from Aaron) After saying hello to all my buds in freestyle land there, I found out from A-man that he was particularly stoked as his son had won the 8 and under division! Yea man, Brandon Graf had taken care of the rest of the wee BMX set and brought home the numero uno. For best trick in that class, it was Bret Mathews who scored the win. Rounding out the regular class it was Bret and Nick Stefanio for 2nd and 3rd.

The next couple of classes were dominated by a name unfamiliar to the freestyle BMX scene in New Jersey but super familiar to the race crowd. Goldsmid. 9 to 11 was taken in both class and best trick by the youngest of the Goldsmid clan Shane. He tore it up out there at his first freestyle comp and made mom and pop Hyper purty stoked! Matt Monaco busted loosed with some cool aerial maneuvers for the second in the class.

12 to 14 was a pretty large class with lots of new faces and names. These young styling mugs were shredding up the jump box and blazing the grinds all over the park. Matt Monaco’s older brother John leaped and ground his way in for the 3rd with Kyle Olinger tweaking up the jams for 2nd place. These two guys were looking amazing for their first time out at a contest with John taking the win for best trick in 12-14. Now as good as they were there was 1 stunt rider who tore it up beyond the rest and that was the other Goldsmid, Clay. Clay had a healthy mixture of good air variations on the jump box, kicking aerials on the quarters and some
good transfer lines throughout the park! The race skills and flow that he brought over from racing paid off and he brought back the win for a stoked mom and dad…who also happened to be named Clay and in his day was a blazing fast regular on the national BMX racing scen. It looks like Hyper BMX is taking freestyle seriously these days
and has sponsored Mike Spinner as well as beginning the process of getting a flow team and complete bikes out to the masses. It’s killer to see another NJ based BMX company take on the freestyle scene. After talking with the older Clay for a bit, he seems real stoked on helping  out with the NJ BMX freestyle scene. Props to the guys for winning and BMXNJ is pumped to see Hyper take an interest in the freestyle side of BMX!

There was one older age bracket this day and it was 15 up. Of course since it is a contest and is subjective, a little controvery struck the last group of riders. Mainly, what constitutes being a “beginner”, in freestyle.

Beginner…well beginner can mean several things. You can be a beginner having never ridden before and just starting out learning tricks and how to ride. And…you can be a beginner being sorta really damn good BUT having never competed in a competition before. We’ll cut to the chase. Kyle Biller STOMPED out on the park floor. Blazing airs, tailwhips, flips, etc. Aaron was sorta stressing on a dude this badarse being in beginner. Kyle was so damn good that he didn’t try a flair once in 15 up best trick but twice and almost pulled it. Which won him best trick for 15 up. Honestly he was busting out big enough to win the class as well but he was cool about it all and let Aaron put the other riders ahead of him. I would definately be looking for Kyle at the comps this year to be placing high in the other
classes. Definately one of the highlights of being around freestyle is how the guys who ride and run these comps work with each other.

So, Kyle wacked the best trick win. The rest of the class was kicking it pretty big as well. Daniel Berely got the third with lots of grinds and variations to boot. Louis Loffreco
grabbed the deuce with tons of style and Alex Escarco bombed the first place win today with some HUGE jumps on the box that had me constantly readjusting the zoom on the Olympus. The 15 up class was the biggest one of the day and it was cool to see so many guys come out to try busting loose on the contest scene. Even though comps are never the only reason to ride, they are a great time to come out, bust your biggest stuff in front of your buds and meet other riders that you may not have the opportunity to otherwise.

I gotta believe that the reason these comps always have such a positive relaxed vibe is due to the fact that they are run by riders from top to bottom. Judges, announcers, sponsors, the whole shebango is BMXers. With this Shields comp being over, the winter – spring freestyle comp season comes to an end in NJ. John is currently working on a real street style comp up in Wilkes Barre PA which should be pretty cool if he gets it off the ground. Word from Shields is that they will also have a FLATLAND area in the new building so there may be flatland comps returning to New Jersey in the near future. If so, BMXNJ will be there.

Big props and thanks to everyone and of course Paul Shields for taking the risks .See you all at the next jam!