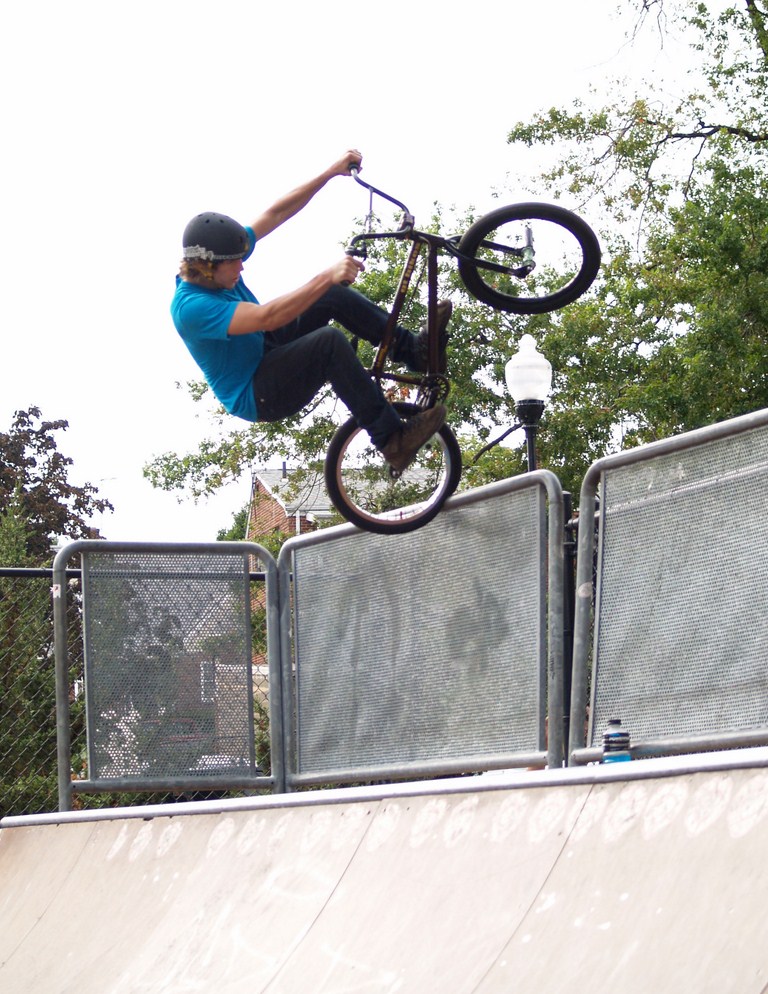 Exit 129 off the parkway gets another workout.

Back up the GSP for round 2 of CJS’s free summer comps in Perth Amboy and this time around the weather was waaay more cooperative. Instead of 90+ with more humidity than a steam room, it was a relatively cool day with mellow temps. The action that was going down on the course though was far from chilled. With GT’s NJ connection, Gary Nilsson in the house, and local bombad BMXers like Mike “Smallfry” Aldomovar, Dario, Tranell and Ricky  in the house., the Perth park patrons were gonna be in for some good riding this afernoon.

Al and Aaron split up the riders into two groups this time around, Intermediate and Advanced-Expert-Pro..etc class. Since Al’s comps are more about having a good time than anything else the classes are just a formality anyway. By the time Christine and I got there after a hardy lunch at Harold’s NY Famous Deli, practice was winding down and we took to setting up to get some video and shots of what was about to go down.

Intermediate was a good time with most of the guys tossing out the tech tricks now. Steven J was pulling a lot of transfer to 180 techy stuff with the occasional smith grind thrown in. Matt Nilsson was a monster on the course, going big with lots of spine transfer moves like tuck no handers and manuals down the grind box. Flex Anderson was pushing hard out there with attempts at footjam whips on the large wedge. Carlos was going off with turndown transfers, whips and 360 spine transfers. The inter class up at perth has definitely upped the skill level. Joe S pulled a super long grind on the back quarter as well as footjam nosepicks and a perfect manual down the grind box. Jonathan R ripped out a bunch of tuck no hander transfers for the salivating Perth Amboy BMX fans lining the park. Edwin was also ripping up some good tuck no handers. The guys were allowed one head to head run with another rider and then given a 1 minute run to pull out their best moves for the judge type people. This afternoon in Perth, they gave inter to Steven J, with Matt Nilsson 2nd and Carlos S 3rd. All the guys were pushing limits though all day long. The next class up was Advanced Mixed, sort of anyone that was really doing well that day was tossed in there. Stuff was going down big that afternoon in Perth in that class so let me recap a few of the better moments here.

With GT’s Gary Nilsson and Small Fry-Mike Aldmovar, Ricky, Dario, and a few other bad arses in the house it turned into more of a show then a comp. Be that as it may here’s some words. Ricky dropped out some barspins and whips on the wedge along with tuck flyouts.. Mike K had some original lines on the mini, upgrinds to barspins and 360 trucks. Dario was awn fire all day long. Flip transfers on the hip, manualing the whole mini and truck driving flyouts, no footer transfers, too much too describe. Strangely enough, he got last. Probably due to cracking his frame during a few flair attempts on the back quarter. One guy that definitely had the place wired was Tranell. He had some of the the most dialed runs of the day with a trick on almost every ramp.Tuck no hand transfers on the spine, vader foot jams, toboggans, downside whips, truck driver flyouts, ice pick grinds, double bar 180…the trick list went on for awhile. Plus…he was riding with a World Bike Organization sticker on his forks…does it get any better…?! Speed flow…yes, Gary Nilsson was in the house, big no foot can transfers, downside whips, barspin footjams, and the tech tricks of the day, footjam 360 nosepick to rollback to barspin and a BIG fufanu on the railing of the back quarter….Gary was in a few words…on that m-fer. Small Fry was repping WSB right with toboggan 3’s, toboggan transfers and lots of combo tricks on the grind box. The old man of the comp Aaron Graf was dropping pretty good against guys half his age with his biggest banger being a floating tuck no hander 3 out of the mini. The youngest dude out there this day was a little man by the name of JoJo. Placed head to head against Aaron during the jam portion of the comp, he held his own against a guy who has been hitting the ramps for a long time and during the single runs, he stepped it up with big tuck flyouts and jamming out a phat 360 transfer on the mini to the wedge. The crowd was stoked to see the little man rip it up and as usual the other riders were fully behind this kid coming out and moving up through the ranks. The progression up there at Perth like I keep saying is getting offa deh hook!

The judges had their hands full but put the scores down like this, 3rd to the small ripper, JoJo, 2nd to the man who used to the young guy at comps but is now one of the big guns, “Small Fry” Mike Almodovar and the win to Mr. Go Big and Go Tech, Gary Nilsson. How close was everyone else? Well it was a 2 way tie for 4th and 5th. Crazy.

After the comp, we dodged the scooter kids and hightailed it back to BMXNJ HQ to review the video and check  out the action once again. It looks like there will be some good stuff later this year in BMXNJ Magazine Issue 3 and brokenspokes BMX as well. The Central NJ scene north of the Driscoll is super hardcore right now and the talent coming out of there really shows. With shops like CJS pushing and helping the scene, it can only grow bigger in the coming years. Props to all the guys at the comps and everyone who helps Al make this happen, and a get well soon to Teddy who was slung up with a torn up shoulder but was still reppin’ on the judging duties.  We’ll see ya at the next one.

Look for coverage in BMXNJ Magazine Issue 3 this winter.