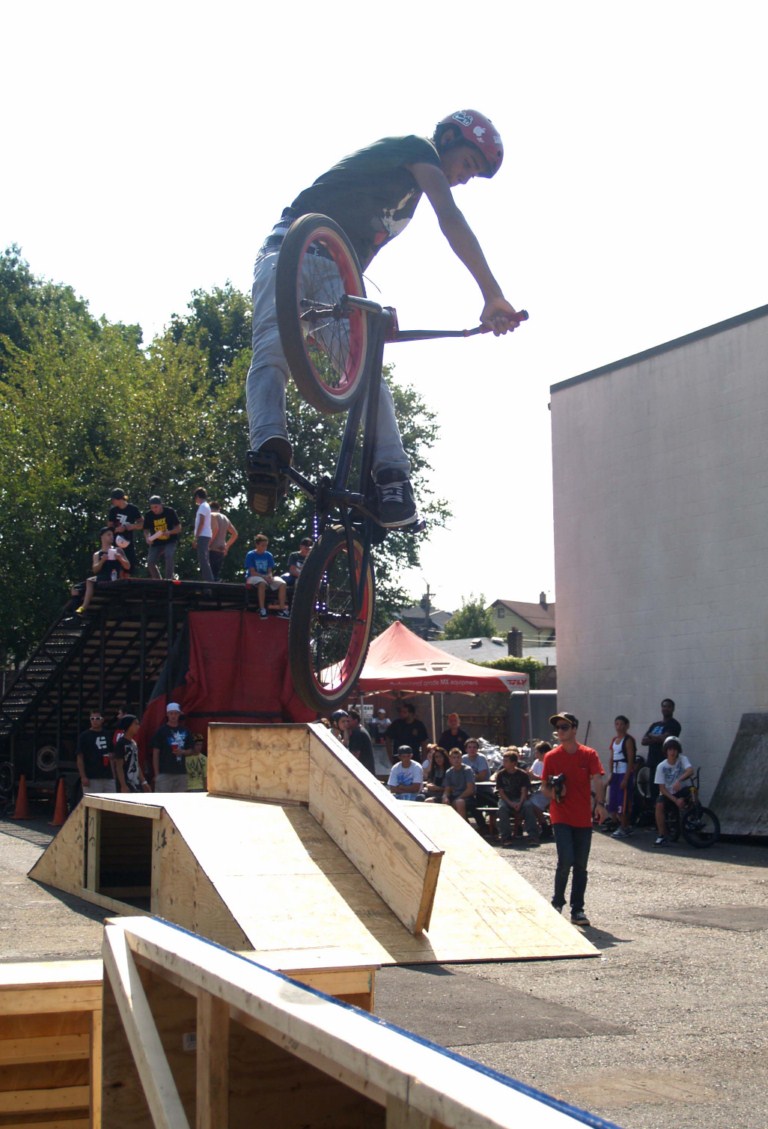 My North Jersey informant Dave Pawson got word to me that a shop up in Lyndhurst was having a comp this September and since I had never heard of the place before, I knew I had to get up there to check it out. Lyndhurst is way up a little past Newark and actually not to far from the old General Bikes Warehouse in Rutherford. The NNJ area has a lot of BMX history so it was gonna be cool to be back up there again for a comp other than going to Hacketts. (No offense.) Following the Passaic up, I got to the shop near 12 and there was tons of people hanging out and having a good time. JPR is owned by FMX rider Jeff Paolazzi. A super chill dude who goes BIG on the MX, the shop is part motorcyles with BMX all up front. It’s pretty cool to see a dude who has been tearing the Meadowlands apart all his life on the motorcycle support the sport that came out of MX, BMX.

Jeff’s the owner but the BMX front man is Justin Francisco who is the BMX shop manager for JPR. He put the whole jam together, getting prizes, sponsors and busting tail to get a full on street course done in time for the event. Big props to a guy doing so much for BMX up there. The course was pretty wild. It reminded me a lot of the old 2-Hip Meet The Street comps. An impromptu wall ride up against the building, huge hubba grind box, 5′ quarter, hip to wedge, another set of small grind boxes and stack of pallets to hang 5 over was the set up. Actually a pretty good rendition of the kinds of stuff you could hit during any street session in NNJ. A true street comp.

Even though there was probably 50-60 riders there, only 20 guys signed up to compete. They were broken into groups of 5 and whittled down as the day progressed. Prelims saw plenty of… crazy street action with the hubba get most of the love. The quarter and launch to wedge were everyone’s second choices for busting out. After prelims the field was narrowed down to 10 riders, Tommy Papanier, Gilbert Soto, Brian Moncrieffe, Mark Fraunberger, Zaire Bansey, Josh Serafin, Chris Morris, Ramel Williams, Sherwin Pacquette and Alex Avilla.

Chris was cranking some great stuff on the launch to wedge. Josh had the whole park on lockdown with lots of grinds and big jumps. Brian was blasting off the side of the hubba to flat. Ankles of steel. Mark took apart the whole park with tons of speed, grinds, and transfers. Some dude named Tommy Papanier was also looking pretty good during the prelims.

The judges took 4 guys to the finals and that was Papanier, Serafin, Fraunberger and Bansey. 10 minutes, fly or die. The time was set and everyone got to work on the JPR course. Josh had a racer inspired style which showed with big as hell airs on the now moved launch ramp. Tailwhips, tucks, can cans were all his. Mark tried a sick transfer from the hubba to the other grind rail which got him into the finals. During the finals though, he stayed on the hubba itself and rocked a rail ride to 180 then to THREE SIXTY. The top of that rail is 4 inches so imagine riding up a 3′ box, hopping onto a 4′ ledge then jumping off of that with a 360. Nuts. Well…when you’re 44 it’s nuts, when you’re 20 it’s a calculated move to try and win a BMX street comp.  Zaiire was blasting the launch and killed it even more during the finals. He had some killer lines and much style, busting lookdowns like they were nuthing but a thang. That Tommy Papanier I mentioned before, well I was being joe understatement. Tommy decimated the place all day long, with barspins on everything and in every way you can think of. Bar to grind, 180 bar, 540 bar, double bar 180 transfer, whips…are you getting the idea? So did the judges. Tommy took home the bacon bits that day getting a new pair of Nike 6.0’s for his troubles. 2nd went to Mark, 3rd to Zane with Josh rounding out the field.

It was a perfect day of BMX craziness with a group of guys who really care about the whole lifestyle we call BMX. Justin ran a smooth comp. The guys put together some great ramps on short notice and after the comp, shop owner Jeff came out and put on a FMX demo right there in the parking lot of JPR in Lyndhurst. Nothing is crazier than seeing the FMX guys cranking out a 50′ gap from a 20′ run up. Balls. Jeff’s team of FMX guys are also available to do shows anywhere that you can fit their portable ramp set-up. G-narly.

After the Jam, Michael Brasile invited a few of us over to the Dam trails to check ’em out and session a bit. That though is a story for later in the week. I’m hoping that JPR’s Jam becomes a yearly thing and am looking forward to more journey’s up to the land of North NJ.

Big thanks to all the guys who helped out JPR and Justin, Nike 6.0, Red Bull, Animal, Sunday, Eastern, Stolen, Cult, and Skull Candy.

Hmm…looks like Tommy and Zaire (Zee) have been picked up JPR…lotsa shop teams coming together out there. Nice. 2011 is shaping up to be a hell of a year for BMX in NJ.

See you out there…