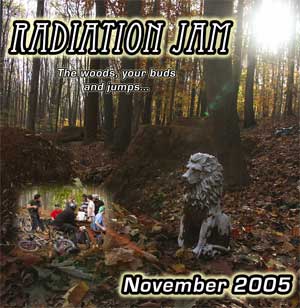 “If I had a million dollars, I’d buy a nice piece of land and put some killer trails on it for my homies to ride…”

The guys who ride trails are a different breed of rider. Not concerned with sponsorships, or who is better… These guys just live for the flow and feel of a good set of jumps.
The middle of November and Frank set up a jam to sort of send everyone off into the depths of the winter shutdown.
Temps were in the mid-60’s and the weather was crisp and clean. So the lads were having a great time tearing it up.
Plenty of killer riders just shredding in the Radiation woods.
Old time Brian Dunlop was seen flowing over a few sets and the zen master Don was there with his son Sean who also happens to be one heck of a small videographer.
Frank the flyer and smooth as Butter were ripping all day long, well in between heading to the grill and snacking down.
Butter was flying so high that it was a little tough to keep him in frame on a few of his jumps over the mondo doubles they have there. All the locals and locals for the day really seem to cut right to the core of what BMX is all about. The feel of a session like this jam is very much like an early 80’s local race, everyone comes together, has some fun, makes some friends and rolls out with some great stories. With guys like Don, Butter and Frank on the underground scene, I think BMX will be kicking for a long ass time!
Thanks for letting this old dog out to chill with you guys!