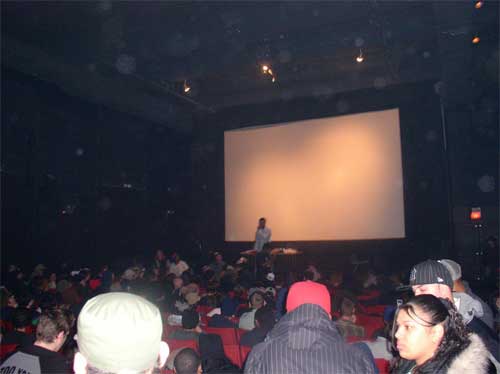 I had been looking forward to getting out and seeing what’s going on in the street world and what better way than to check out the Animal video at 2 nd Ave 2 nd Street at the Anthology Film Archive in Manhattan.

After some networking Mike Wilson, Rodney Moreweiser, Steve Wisbeski, Erin Donato, a young an incorrigible 18 year old and I headed off down 78 in route to the Holland Tunnel.

Upon arriving in the city Mike Wilson instantly found parking but we took our sweet ass time and ended up in Cooper Triangle near ChiqP.

We arrived at Anthology Film Archive and the place was packed. So much so that I ditched out and went to the corner store for refreshments.

Ok back to Anthology Film Archive, this place was a perfect spot a video premiere. I have been out of the game for some time but I will run down a list of characters I knew. Aside from our crew Brian Tunney was present sipping a Presedente, Crandall from FBM, most of the Animal crew, Glenn Mulligan and a couple hundred others (no disrespect I just don’t know names).

I’m going to get straight to the point here. This may same bias but Jared Washington’s section was the bomb this guy lives a couple blocks from me in New Brunswick and was tearing up the” Black Rail “as they call it. To many crazy rail variations to name.

Steve Hamilton amazed me with his style and his ability to hit street obstacles that others can’t even fathom. This guy goes real big and falls more graceful from 8 feet off a ledge than I do from a hang five.

Cameos from Mike Wilson bunny hop to hang nothing over a median, Cole back flipped off of a piece of plywood on some steps, Ralph Sinisi ripping.