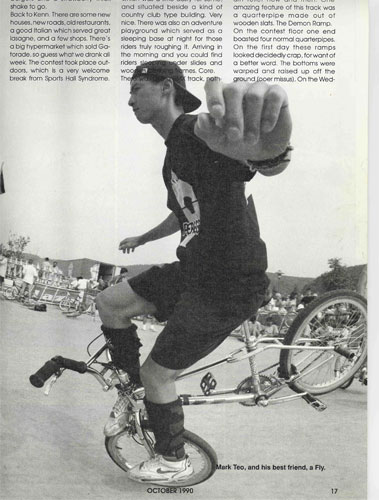 The end for me was probably when I went to college in 1991.

Obviously, I rode a lot with my brother Alfred. In the early years, I rode a lot with Morgan Geist. In the later years it was CraigLePage, Scott Santamaria, Jeff Crawn, Jay Jones, and Sean Leslie. I also rode quite a bit with Tyson Godfrey.

When I first started it was Dennis McCoy. I loved his style and speed. A few years later, Kevin Jones was the man. When I happen to catch what flatlanders are doing today, I still think how basically all those tricks stemmed from one person, and that was Kevin. I also rode quite a bit with Chase Gouin. He was awesome, and I felt like he really took flatland to another level. Kevin and Chase were the 2 most innovative guys back then.How did you get hooked up with Peregrine?

I met Craig LePage at some comps, and we used to get together and ride on the weekends. I did some shows with him and Scott Santamaria, and eventually he got me sponsored by Peregrine and ODI.

The first competition I won. It was at a large local event on Long Island. I won my novice class which felt great, but then got my bike stolen later that day. Going to Germany with Craig LePage, Scott Santamaria, Jay Jones, and Jim Delavalle was amazing. The European riders were really into it, and just wanted to ride with us. There were some really good European riders, but they would all just stop when we would come around to ride. I guess that was my 15 minutes of fame. I would also say my first AFA Masters in Wayne, NJ was awesome. I was competing for the first time in 14-15 expert. I qualified 2nd and eventually placed 3rd. Up to that point I had done some local comps and done well, but to place in an event that was actually covered by the magazines was unbelievable.

Tyson Godfrey was a great rider. His stuff was very original and difficult. Scott Santamaria was also very good, but didn’t seem to get the credit he deserved.

I try to cruise the internet and find flatland sites. I actually ordered some videos 2 or 3 years ago just to see what guys were doing. It’s much more technical today then when I was riding, but the basic root of the tricks is still the same.

I still have my bike hanging in my parent’s garage. Once in awhile I’ll take it down to mess around, but my center of balance is so different. I feel like I’m going to break my neck just doing a boomerang!

I work in the family business. I’m married with 2 daughters aged 1 and 3.

I don’t think I would even try. Flatlanders are a different breed. They’re individualists and nonconformists.

I think it’s really great that you guys are putting this together. Freestyle was such a huge part of my life, and I have such fond memories from those years. I hope that I can read similar interviews with some of the guys I rode with back in the day.

I think I was 11-12 yrs old…back in 1987-88…I was really into skateboarding and then my brother Mark started riding bikes and I go t hooked.

Probably around 16-17 yrs old…I got really into Lacrosse in HS and plus I had absolutely no one to ride with. Back then no one in my high school knew what BMX freestyle was.

I always tagged along with my brother Mark and his friends when I got the chance…Craig Lepaige, Scott Santamaria, Jeff Crawn…Jay Jones, Shawn Lesley…but a lot of times I would ride by myself…everything I learned always came from these guys…they were always cool to me.

Well for sure all of the above mentioned…I think my favorite rider was Kevin Jones…every trick you see today was b/c of him. He was the master, and I would say invented 90 % of all tricks that everyone was doing at that time. Everything you see today that these guys are doing come from him.

How did you get hooked up with Peregrine?

I was never sponsored…but Mark, Craig, and Scott were sponsored by Peregrine and always hooked me up with stuff…so I guess you can say they sponsored me…I always got the latest stuff from them and never had to pay a dime…they also showed me how to tune my bike…

Going to contests and competing. I still have quite a few of my comps on tape. I like to watch them from time to time just to have a good laugh…actually I got a picture in BMX Plus doing a trick…it was the coolest thing when I saw that the guy actually printed it…I still have that

A lot of guys I guess but probably Tyson Godfrey…he was real good.

Nothing really, I guess I still treasure the fact that I did it…I still have all my trophies I won back then…I know pretty sad…I did a commercial for Childs World…if you ever seen it I was the freestyler and did the skateboard jump at the closing of the commercial…that was pretty cool.

I bought some videos a while back in college to see what these guys can do…its insane…no brakes, and all the transfers they do from one trick to the other…these guys are on a totally different level then when I was riding…

I still have my Dyno Comp from way back when hanging in my parents garage…I also bought a Hoffman bike when I was in college to mess around on…I started getting back into it in college…going to empty lots and riding 2-3 hrs a day…to my surprise I can still do a lot of stuff…just real sketchy…I’ll mess around once in a while.

We work for my father’s plastic company which has been great…study Brazilian Jiu Jitsu in NYC, and play lacrosse once in a while.

Keep at it, watch lots of video and most importantly have fun.

Just like to say thanks for giving Mark and I the opportunity for this interview…when I heard of this I was like man who remembers us back then.