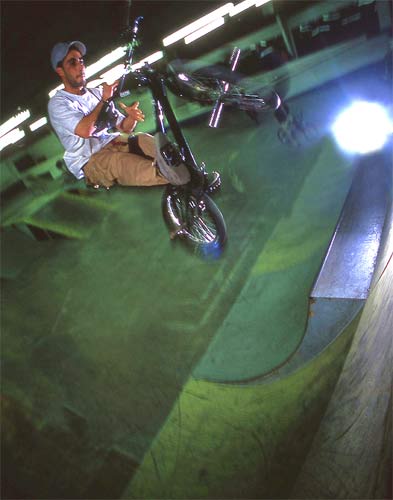 A note from the Admin. ~Adam Guild told me he’d like to do a tribute to Joe Tiseo. I had remembered his name from the time right around I was getting out of being heavily into freestyle. I knew what had happened to him and am always down with honoring Jersey riders, past, present and fallen. Here’s to you Joe and Thanks Adam for getting these guys to come together and give these kind words.
Ride on, Joe…

When I was asked to write something about Joe, I realized how much that I had to say, but none of it could really be put to paper. Just about the riding sessions that we had, all the times we would chill, all the crazy shit that happened when we were together. Too many good times and so much fun. All these times seem so long ago. These are definitely some of my best memories in my life.
The thing I remember most of all was the positive energy that Joe always produced. It was so great just to be around him. He was always happy. As good of friends as we were, I can’t even remember any times that we disagreed on anything. Actually, he was always right. As soon as he told me what he thought, we would just do it his way. Everything that Joe did was the best. He was so committed to whatever he wanted to put his mind to.
Joe was the only one that I would trust to dial in my bike. He always had it perfect for me. All the flat tires that I would get would be fixed in seconds. So many sessions that I would have just called it quits, he kept me riding. I can’t even tell you how much I learned on my bike by riding with Joe. He would push me like no one else.
Joe was so good and did things so easily. For every trick he learned, he would do tons of variations out of it. I remember one time I thought I was hot shit. I did this gap to toothpick grind from one quarter to another. It took me probably a half hour to work up the balls to do it and I was convinced that the trick was the shit. I look right behind me when I landed and Joe did the same thing, but ten times faster, longer and did a no footer out of it! Then for added insult to injury he did it again to bar spin. That was how good he was.

When I was asked to make a list of Joe Tiseo’s achievements I didn’t think it would be too difficult, but the more I thought about it, I realized that simply listing someone’s achievements doesn’t really convey too much about that person. Surely one could infer that an impressive list of accomplishments would’ve required a great deal of talent and dedication, both of which are admirable character traits, but I don’t think it’s fair to judge someone solely on what they achieved in life. After all, it’s not just what you do, but how and why you do it.It’s quite obvious that Joe Tiseo was talented, his abilities on a bicycle are known far and wide, but what a lot of people don’t realize is that Joe was born with the gift of natural talent. We were just lucky that he choose to convey that natural talent on a BMX bike. As far as achievements are concerned, every time you learn a new trick or just do something you couldn’t do the day before, it’s a personal achievement. I think that’s part of the thrill of bike riding. With that said, I think Joe’s biggest achievement was his modesty, because even though his list of little daily achievements on his bike were far greater than most of ours will ever be, he never let it go to his head. Instead, he let his riding speak for itself, he didn’t care if he got praise or not. He used to say to me, “Do it for yourself, you’ll appreciate it more.”

That’s why he did it, for himself—for his own satisfaction. I think that’s a true achievement. —Jeff Zielinski
We’ll be adding more to this as time goes by and more people chime in. I’d like to thank Rob Dolecki for donating the picture to our site.