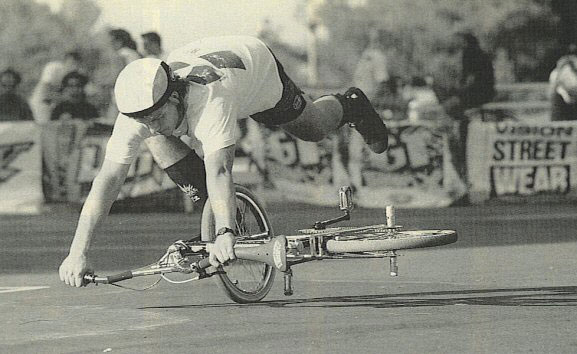 In Memory of Joe Keller
What is your earliest memory of freestyle?

My earliest memory of Freestyle huh! It would have to be a picture of Mike Buff doing a curb endo in an issue of BMX Action Magazine. This is before Freestyle really became its own sport. My oldest brother Scott and his friend Kenny use to set up jumps and do other tricks in the street when they were not racing (BMX). I kind of saw the birth of Freestyle evolve in magazines like BMX Plus and BMX Action.

Who were your influences?
My influences consisted of: My brother Scott and his friend Kenny early on. Once I started riding at about age 12 I was a big fan of Eddie Fiola and then Martin Aparijo. I was a GT guy early on. Many people were. As far as riding and an influence in tricks I was always influenced by riders that were original. (Rick Moliterno, Kevin Jones, John “Dizz” Hicks, Gary Pollack, Gery Smith)

When was the last time you rode?
I rode about 2 months ago and almost busted my ass! Pretty funny! I was messin’ around in my street. I was pulling off things like rolling tail-whips, funky chicken’s and locomotive’s. I got a little too comfortable with what I was able to do and took a digger! It hurt for a couple of weeks but I lived.

Who were your sponsors?
Not in any order: Peregrine, Kuwahara Bicycles, Mushroom Grips, Vision Street Wear, Hammer, Trim Surf-wear, Dia-Compe Brakes and Vans. (They were not all at the same time of course.) I think there were some others but I can’t remember.
How has becoming World Champion in Flatland influenced you today?
Winning the World Championships event in Germany was cool. It was not too big of a deal in the States. There was about 6 of us over there in Germany for the worlds. (Mark Teo, Scott Santamaria, Jay Jones, Sean Leslie and a few others.) It was a pretty cool thing for the resume. It’s pretty cool to talk to other people about it today. It sounds like a really big accomplishment to most people. Many of the competitions in the states were more competitive due to the riders that were here.
Who did you ride with?

Early on I rode with all of my local guys. Hamid Rashidzada who rode for Mongoose and guys like Jason Gear and Steve Rulli who rode for General were probably the only names anyone would know. Those were the early years when I was sponsored by Kuwahara Bicycles.

The later years I rode with Mark Teo, Scott Santamaria, Jay Jones, Sean Leslie. We would go all over. Sometimes down to York and ride with Mark Eaton, Kevin Jones and Chase Guinn. There was always a bunch of riders down there. We would go to allot NY Freestyle comps and Levitown PA comps. Those were the 2 regional comp scenes we would go to.
I actually rode several of your signature frames. Did you like that frame? How hard was it to get into production?
My signature frame was designed about 2 years earlier then it was released. By the time it was released it was a little dated as far as design went. We were dealing with manufacturers over seas that would say one thing and do another. The final product was good but a bit late for the market in my opinion. All in all it was pretty cool to have a frame released with your name on it. I also designed all of the Peregrine handlebars which sold pretty well.
What tricks did you invent?
I was known mostly for my trick called the “Landspeeder”. I had a whole bunch of tricks I made up. Many were not named. Many were variations that nobody else did. You know, different combos and stuff. I tried to be as original as possible. I didn’t spend much time leaning all of the trendy tricks everyone else was doing. I use to hate going to a competition and seeing the same run performed by 10 different people.
That is how I won many competitions. Just being original.
Have you seen modern riding? And if so what are your thoughts?
The current riding scene is pretty cool. I remember seeing Dave Mirra at a PA regional competition when he was about 13 years old. He was pretty damn good then as well! I think pipe riding and the street scene has gotten crazy. The things guys are doing now is unheard of. As for flatland I think it has gotten very spinning/rolling repetitive. Many of the tricks look similar. Don’t get me wrong! It’s pretty cool but only for a few minutes.
Is there anyone you would like to thank or any stories you would like to share? Please feel free to express your thoughts.

I would like to thank you for the interest. It would be cool to hear from some riders of the past. I can be reached at evofit@yahoo.com . I would also like to dedicate this interview in memory of Joe Keller who I use to ride with in the early days. Joe lost his life in the World Trade Center tragedy.