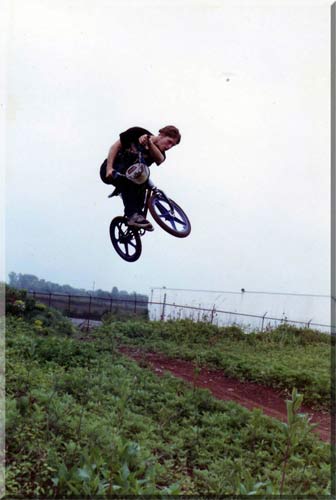 Catching up with Dan Menapace
To some of us here in NJ you are a local legend and the beginning of freestyle BMX in NJ.

1) What are your first memories of BMX or Freestyle?

Well, the first tricks we were doing weren’t really considered freestyle, but we would have wheelie contests on our Stingrays to see who could wheelie around our entire block.
I could usually make it three quarters of the way around before a rabid dog or parked car got in my way. Then, we started setting up ramps made with plywood and car tires and practiced jumping. We tried pulling off Trash Can Morgan airs but usually ended up wrapped in gauze bandages.

Not long after that, I had a dream of a BMX track across the street from my house in an empty field, complete with berms, tabletops, moonwalker whoops, and a water gap. A couple of days later, my dream became reality when my friends and I plowed a track in the field (borrowed a rototiller from a neighbor) and piled up firewood and boulders to make dirt jumps and banks. The word got out fast and before we knew it, we had kids from all over town coming to our track. We would be out there from dawn till dusk everyday just having a blast with everyone. We even set up a makeshift starting gate and held a few semi-official races and jumping contests.

There was also a crew of guys on the other side of town (Robert Lee, Scott Anderson and friends) who were into wood ramp jumping, and they were way more advanced than us at the time. Every now and then, we’d cruise over to their practice parking lot where they would be launching huge tabletop airs across 25 ft. ramp to ramp gaps, which was completely jaw dropping at the time. They were somewhat intimidating but we always had a good time and mutual respect for one another.

2) Can you remember your first bike or bikes and parts?

It was all about the KKT alloys.

My first bike was a crappy Huffy, which I broke in about 2 weeks. After that, I had a Roadway which was pretty strong but was kind of heavy. Next, came the P.K. Ripper, which lasted almost a year before it broke near the bottom bracket. I had Landing Gear forks that bent severely. (SE Racing had a few bad batches of metal which of course found its way onto my bike.) Lastly, the original Haro Freestyler made in USA by Torker. That bike was like a Bob Haro Replica with the B.H. Vector bars and a home-made drilled neck bolt to allow just the cable (without housing) to pass thru to activate the front brake.

My friends and I also had some off-the-wall ideas like using the coaster brake barrels for footpegs (which killed your feet by the way), rivets in the seat (another bad idea) for bike surfing, and hair spray on the brake pads which lasted a solid 10 minutes.

3) What are some of your most memorable moments of BMX?

Inventing new tricks like the tweaked 180 curb endo and one-handed pedal picker were probably the most memorable for me.

Also sessioning in front of Bicycle World in Howell was really inspiring. We used to meet up in front of the old arcade in Belmar beach and have some fun flatland sessions. That was the beginning of organized freestyle. It was like the bad boy rebellion from racing, and it was getting popular so fast. This was just before the original Haro Freestyle frame came out, and the magazines were starting to take notice. Darrel Montgomery was pushing the limits bunnyhopping motorcycles and pulling some crazy power moves.

4) How did BMX influence you?

It helped me realize how much I could push my abilities and that helped me progress into other sports and achieve other goals in life.

5) Who did you ride with and where?

The local kids in my neighborhood–Darren and Chris Usher, Tom Lutz. Then later on, about the time when front wheel hops first emerged, Scott Daibas, Brett Middaugh, and Tom Neiradka.

6) What other hobbies or interests do you have?

San Francisco for the last 10 years.

8) Are you currently sponsored for anything?

Not currently. The last things I was sponsored by were K2 and Ride Snowboards, and Shut (Zoo York) Skateboards.

9) What are you up to theses days?

I run a longboard skate website (www.sflongboarding.com). A few of us old schoolers search satellite imagery for ditches and spillways, then go on recon missions tracking them down and skating them. I got an extensive collection of ditches, full pipes and other ‘crete that’s not meant to be skated on my message boards. I still snowboard a lot in the Lake Tahoe area. We just bought some land up there near the Strawberry Pool (Rt. 50) to build a vacation home on and ride Kirkwood. I also play bass in a hard rock band called Kineto (www.kineto.net) here in SF.

10) Anything you would like to add? Give special thanks to?

Id like to thank all the guys I rode and hung out with back in the day. Lots of great memories. It’s great to see all these poeple getting together on these bmx websites. It brings a sense of community to the sport that was lacking somewhat before the net was around.

11) Can we use your email for others to contact you?

Sure, just don’t tell the taxman.