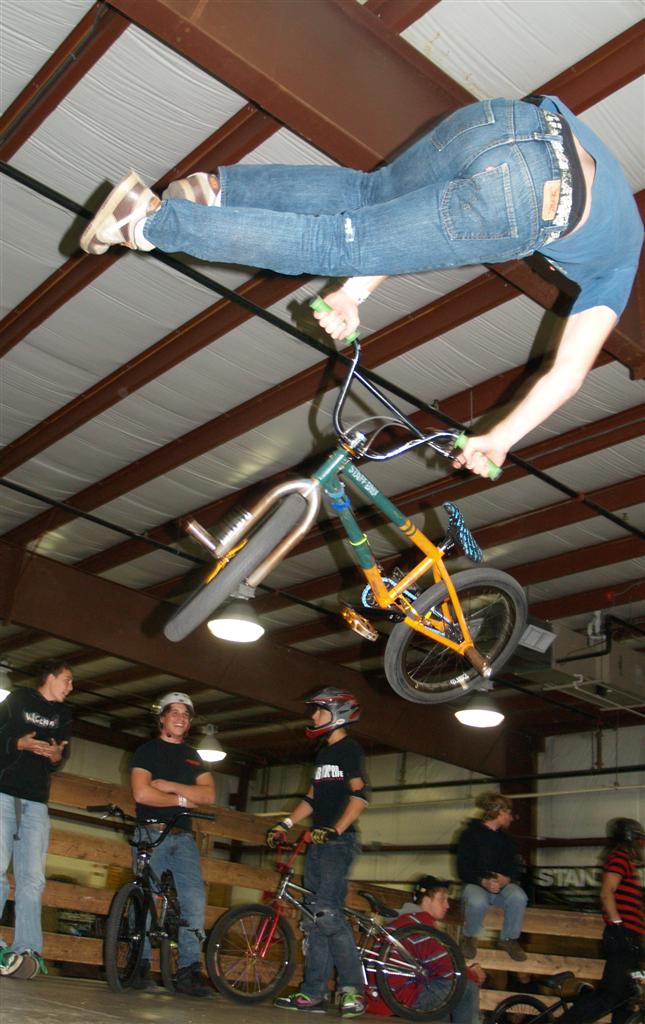 Shields ripped into their 08-09 comp season with a early November send off that had a good 50+ riders attending. This time around I was without the video crew so I was alone in my ability to remember what was going down at the comp that day. Heading into the ramp mania arena upon my arrival I saw quite a few of the crew from comps past in attendance. Aaron Graf (yea dawg I got the name right!) was heading up microphone duties for the day, with Anthony from the H-Town comps heading up the judging duties helped out by Randy and John with other duties handled by none other than Somerville madman Mike Kuhn. Speaking of Somerville, it seems that Bill Jones is working on some cool stuff for the coming year with not only Somerville Wheel Park but the other contest promoters in the PA-NJ area. The ’09 season for BMX in NJ is looking pretty dang good.

Getting set up and checking out the beginner class I noticed that the new guys all seem to be heavily influenced by the Garrett Reynolds school of BMX. Big time street influence, plenty of grinds, and tricks on wedges. I’m a fan of Garrett’s riding style as it seems to be the most fun based riding out there and always reminds me of how it felt to be just blazing through the neighborhood back in the early days of this crazy sheeot. Jammin’ Jamison Woodell rocked the beginners with lots
of that crazy grinding style and a few smoking jumps for good measure. Each class also had a best trick contest and it was 3rd place beginner, Vin Chrispino who busted out with a icepick across the whole ledge to take the win for best trick in the beginner class.

After the newbs class got done lofting their jiveness, the intermediates were given the floor to get some practice time in and it was very apparent that these guys were gonna step it up a bit from the tricks being thrown in the alotted warm up time. Although Tom Martin was able to talk my ear off for the better part of the afternoon as well as bust out some big airs and some of the fastest grinds of the day, the judges did not however decide to put him in one of the top 3 spots. BMXNJ does however give the man with the trails in the yard props for riding a very 1980’s inspired pink frame. Tom also put out that he is thinking about having a jam at his house in the coming year…remember what I said about ’09 being good for BMX? Back to the guys who actually placed in the comp, Efingers BMX freestyle team continued it’s climb towards taking over NJ freestyle comps with Ben Bentivegna walking off with the 3rd place spot after a couple of well varied runs. The BMX racers continued stepping into the freestyle realm and smoking the comp with the return of Chris Koval to the Shields comp arena. Chris was busting out with BIG airs and some slick variations as well as some of the best transfer lines in the inter class. Chris’s nickname from what I remember in the racing days was “Kid” Koval, seems that he is now becoming the man. Looks more and more like the racing and freestyle skils overlap quite well. The big winner in the class was Victor Vergilio. Victor was trickeor (yea, it’s a play on spelling, jeesh!) than the rest of the huge inter class. His runs were varied with stunticles all over the course. He was also one of the few inters to really jam out on Shields KILLER mini ramp with good sized airs, lip tricks and variations. He topped it all off with some good jumps that weren’t limited to no handers, turndowns and some tweaked inverts. Definately some cool stuff by the man in the Albe’s shirt. Best trick in this class was taken by everyone’s hero… Joe Libero.

The next guys to boogie down (it’s a vague 70’s disco reference, we now return you to the 21st century) were the “Advanced” class. What the heck is an advanced class? Well if you have really good expert class and pro class guys at one place, how do you lump them together and call them one thing? Well, you call them advanced, let them rip it up  and watch the monstrous amount of spectators get stoked. (Yepper at one point there were so many people jammed around the contest area that Aaron had to stop the comp and ask them all to move out of the riders line of fire. Awesome!)

Practice for this class was utter mayhem. There was so much airiing going on that the FAA was called in to keep guys away from low flying aircraft and MIT was in the area checking out all the tech going on. Brandon Jones was airing out of the mini into the wedge on the opposite side in prep for a trick later in the comp. I saw at least 3 guys blast airs out of the wall ride in front of the park and one dude even aired the monstrous back wall ride. Michael Skulnick sporting some badd azz dreads was kicking downside whips out of the hip quarter a good 5-6 feet out and nailing them everytime. BMXNJ Szine cover dude, Dean Watson was doing supreme damage to the ramps with some crazy big airs and stretched tuck no handers. Dean was also clocking the best ‘stache of the comp. John Brangard was busting some BIG airs out of the 6’ quarter while sporting the only chrome BMX busting tricks that day. Zack Rayner was on it clicking turndowns on the jump box and out of the quarter, harkening back to the days of Harry Leary and Mike D. As the comp progressed and rolled into the second round for these BMX styling maniacal dawgs it became apparent that a few guys were standing out. One of them was Andre Postell, Andre was going large in everything he did but he really stomped it when he attempted a front flip drop in from the mini ramp into the wedge. He just barely missed getting it down but walked away wih the rest of the riders putting their jaws back in place. Expect to see a lot of this dude on the scene. Andre was the bridesmaid this day to the top 3 as Money Mike Annecchini strolled into the tre spot. Mike was seen wandering the area sporting his wife and new born youngung. Being the proud dad he is, he out down some BIG airs on the jump box and quarters to impress not only the judges but the family that was there cheering him on as well. Props to “Dad’s gotta make the” Money Mike. I mentioned Big Air Brangard a couple sentences back and true to his royal radness, John was able to sky his chrome stunt machine into a second place at Shields. John was also seen doing his best impersonation of Clark Kent’s alter ego at altitude over the jump box during his run. (That’s a long winded way of saying, he busted out a killer superman air) Who won? Everyone who stuck around to see these guys do their BMX thang! Ok, actually it ws Brad Kaminski. Brad had the perfect combo of tech tricks, big jumps, killer airs and shuweet grinds to put together a win in a very stacked and difficult to judge class. He strolled back to his homestead with all kinds of swag from the sponsors.

Last madness of the day was best trick for the advanced class. I’d have to say this must have been the hardest class to judge. 10 minutes of just letting the craziest guys in the place go out and push their own personal limits, all for a set of new rims. How does one differentiate an incredibly intricate link of super tech tricks from a banger air trick? Well this time around they decided that a technical trick, done in banger style would be the winner. Who was it? None other than CJS rider Brandon Jones. Brandon was using the warm up jumps out of the mini to take the big gap jump to another level with a double whip out of the mini, over the gap and into the wedge on the other side. It was big, it was burly but it also involved getting enough speed in a tight area to cover the distance. Couple other cool tricks I witnessed in the best trick class… Eric Marion, gapping from the edge of the hip ramps across the entrance to the park and onto the far wedge that leads to the front wall ride, whilst doing a tuck no hander. Want another one? Jesse Kowalchuck, hucking himself out of the mini across the large platform and busting out a monstrous superman whip, then after pulling that, he went back just because the adrenaline spoke to him and attempted a big 360 whip over the same spot. Total and complete, 100% certified take me home alabama, insanity. A perfect capper to another fun as hell BMX comp.

That was it for this round at Shields but the big S man is already planning more comps for the winter, so we will be back for more fun up in the land of Hunterdon. Check the results below, support the companies that support the sport and stay tuned to Shields and BMXNJ for more comps and coverage. Now get off this dang worthless interweb and