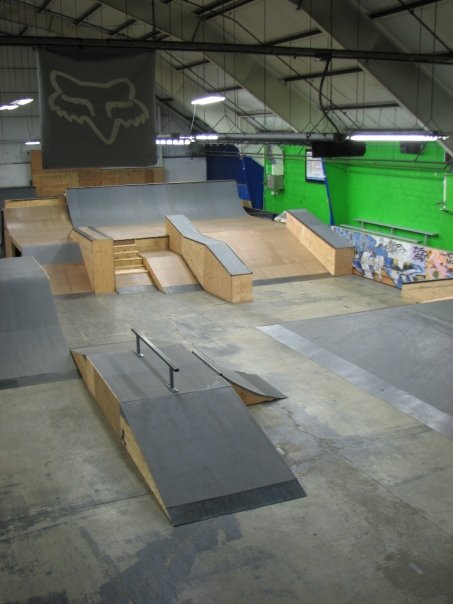 I got notice from s4lnj that Hackettstown was putting together another Throwdown comp about a month or so back and since it has been 5 months since I’ve been there for BMX Invasion 8, I figured now would be the time to head up and see what new stuff was kicking in the northern lands of NJ. Deirdre and myself were going to Dave Dechert’s place anyhow to see how he felt about the East Coast is the Right Coast video that we had just completed, (He was pretty stoked on it by the way, so expect some news on that soon.) so the timing was killer. After setting up photoing and video permission from comp organizer, Anthony, we got there around 2 to see the beginner class just finishing up and practice coming together for the expert and pro class. Yes, a pro class for freestyle in NJ. Let me tell ya, these guys are off the hook. We were able to wrangle old school BMX racing pro Dechert over to the park and he was blown away by the amateur talent there, let alone the pros, for a guy whose last real taste of BMX was in 1983, to see what BMX had evolved into 25 years later was quite an eye opener.

We set up and started wandering about seeing a few of the local wrecking crew for H-Town in attendance
chilling and smiling as usual. Dirk Lesko, ace photog and designer of the new and improved H-Town website, was banging out photos, Al D was wandering about, holding himself together as work was calling his name the next day, we even got to see an old, well actually mid-school bud of mine from the ramp-ateria days, John Nicholson. John was a local at the place who went on to be a semi-pro MTBer and is current co-owner of Cycleworks up there. It’s really great to see all these guys again and to see how well they are repping the sport in the 21st century.

I’m not even going to pretend to tell you I remember all the insanity and ballz out tricks that went down that day. I’ll just tell you a few of the highlights of my memories and let you, our avid readers (all 20 of ya!) check out the shots from here and the Hackettstown site. We’ll also have some highlights in a vimeo video wrap-up sometime next week. The level of riding that is coming out of NJ from north to south these days is no different than what you would check on Dew, X, or LG tours.

In the expert class, Efingers crew was repping hard out there and kicking it big time with Eric Marion busting out with his assortment of original tech street tricks on the course. Wandering around the park snapping pics I noticed Matty Cranmer tearing it up with big whips, 360’s and crazy transfers, later in the day I found out Matt had ridden in the beginner class and was moved up to expert that day. From what I heard this was his first comp and moving up to x your first time out shows the kind of talent coming out of those Cranmer genes. The rest of the class was out of control, backflips, double whips, 540’s, big airs out of the quarters, the expert class today is really crazy with so many guys capable of killing it out there that watching it becomes a blur of radical insanity to crazy to put down in words. The pros on the other hand need to be seen to be believed, with Al Dimino of BMX Invasion in the house, Mike Fede, Sonny, Hambone, and too many others it was pretty insane out there. Vinny Mannino straight off of hitting up the CBJ comp at Somerville, moved on up to the pro class at H-Town and threw down some crazy big stuff and a very cool doubles run with his bud from the Incline Club he practices with. (I still gotta learn all these guys names…yowch) Al went big with attempts at peg stalling the wall above the back sub box but it wasn’t enough to get to the finals. Al is however busting out at his new job and making big waves there. Hambone was letting loose with his best stuff this weekend and had some huge flips going down and big whips all over the park. Even kicking a large one on the battleship ramp. Sonny was also letting loose some massive tricks out there for the crowd chilling on the sidelines. Biggest small pro out there? Little Shawn, this dude on the pink scoot was pulverizing the course, everyone was asking, “How can such a little guy, live so large?” Geoff Meade and Mike Fede had some of the best stuff of the day but you’ll all have to wait for the video highlight
reel for that stuff.

H-Town always has huge turnouts for their comps and this time was no exception. The whole crew came together with the riders and put down a chill time for all the BMXers and their buds. We said a few goodbyes to our friends there and headed back to south central….(NJ, that is) to get ready for the next BMXNJ adventure. See everyone at the next comp. B n D. Lata’!