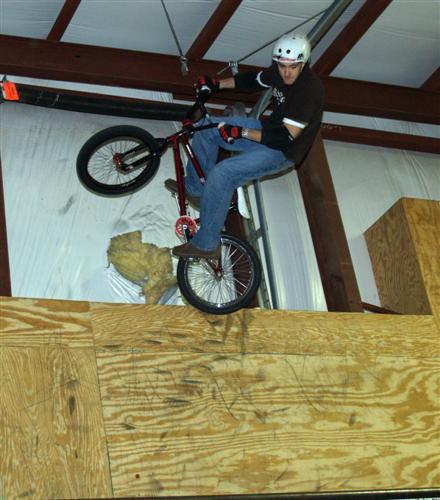 Snowy days and Sundays always get me to get my butt up to Shields Skatepark in Flemington NJ for a solid time hanging with the freestyle BMX guys and gals, Joe Synoksy and the Shields Skatepark BMX Contests.
The vibe on pulling up to the arena was pretty mellow for the intense BMXing that would take place later on in the day. Many of the old guys that still ride were there chilling and heading up a plan for putting the word of BMX out in the proper manner. Al from CJS, Rodney Ripple from High Gear Cyclery, Aaron, freestyle team manager guy from CJS, and even Hippie Steve, yea ladies, hippie Steve from the Jump For Joy days popped in for a guest appearance fresh from the happening city of Austin TX.
The sponsors were super coolio donating gobs of good stuff for the shredders. Animal, Primo, Mirraco, Efingers, Pete’s Bike Shop, High Gear, and CJS were flowing doodads. The State Clothing Company and weplaycrazy.com maniacs were also seen either swinging the Spanish John cams or chilling by the chainlink fence with some new cool clothing designs.

BMX freestyle, rider owned since, dang the beginning really, if you count Bob Haro and Rob Morales…word em up guys, way to keep it going.
Plenty of practice in the a.m. meant crazy huge bombing insanity was going on even before Graf got on the mic for the first verbal assault. Justin Benthien was seen busting a huge wall slappy during practice, huge cause the wall he was rocking was a good 4′ from the small wedge leading up to it. More whips than Kraft, Michael Seawright was bombing everything on the course with legs flailing, at one point, just to warm up he decided to toss up 3 boxes about 3′ high that were no what anyone would call stable and have at it.. after a few attempts the man slid that thing like it was a beginner rail at Woodward camp, insane and done just to have fun. The little guys were killing it during practice and the comp itself. Jesse Kowalchuck was busting mad lippy tech tricks and polishing off the jump box. Brett Kline was shredding it and also confusing the snot out of me as I everytime I heard the name Brett, I was looking up and missing shots! Dagnabbit, LOL. The final order in the beginner class was 4th- Jersey Justin Benthien, 3rd- Robert Cappa, 2nd Brett Kline, 1st Jesse Kowalchuck. The dude who won the beginner class here would have been shredding the Expert class at a Meet The Street comp 20 years ago, progression of these guys is unreal. My memory sucks so I will let the pictures do most of the talking. Intermediate went 4-1 like this, 4th- John Brangard, 3rd- Don Lee, 2nd- Brad Kaminsky, and the big winna, 1st- Evan “Chilly Willy’s Buddy” Smedly. Expert was THE class to check out and it was f-ing NUTS. Tech to the max, huge honking stinky massive airs, grinds off the hook. Who was busting HIGH? Al deman Dimino, rolled in out of PA and promptly blasted a huge fufanu on the back of the park, at least 12’up. Something is wrong with that lad, the fear gene just ain’t there. During the comp he was also busting flairs, 3 whips and attempting a massive flip whip. The dude is a ripper with a capital, bro your nuts! The bangers only got Al 4th today, but he is looking to be dialed for Dew Tour Open Qualifying in June at Maryland. 3rd got picked up by Joe Synosky, who was rolling out some crazy variations and smooth lip tricks. Brando Bellow coulda been a contender but had to settle for number 2 today, he was busting some crazy high stuff out there, killer hip transfers. The number one dude of the day though was Noel “gonzo” Gonzalez. Noel knocked out the jumps, the lips, the transfers, and the tech for consistency and the win. Hitting these park contest lads, it seems that a consistent well rounded (man that sounds freaking boring but it’s the way it is with the judges) run is what the guys writing down the numbers want. The best trick comps were taken by Eric Marion in beginner, Joseph Libero in intermediate, and Mike the whipper Seawright in Expert. Thanks to all the riders, parents, gals and helpers who made the comp a good ol time. Mr. Shields runs a solid park with a good atmosphere, go out and take a session there.  Next comp there is an Expert half-pipe banger from 8-12 PM on April 21st. It’s gonna utilize the massive half-pipe in the back, the rest of the park will be available to everyone else to shred on.
More pics of this comp will be in the next issue of NJ BMX Szine in late April.
Shred that beotch lads and lasses, C-YA. UPDATE! Wanted to thank Justin Benthien for putting names to the pics! See ya in NJBMX Szine J-Bomber.