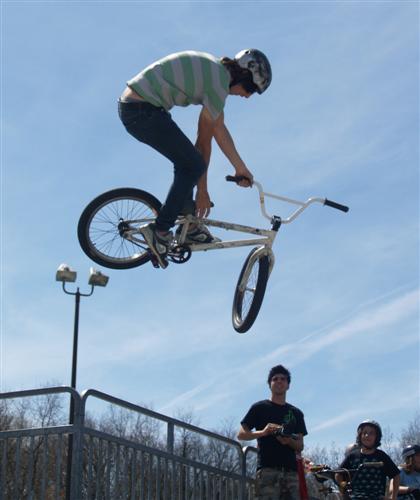 It must be 2007 because I rolled into Woodbridge and lo and behold there was an open to the public skatepark that was letting in BMX bikes. Thanks to Al at CJS, old school BMX maniac, the Woodbridge skatepark was secured for a full day of BMX insanity. Pulling up to the park the lot was full and way too much shredding action was taking place behind the fence. The skatepark has a fun layout that is super bike friendly, about the only thing missing was a decent jump box, but as far as municipal public pre-fab parks go this one rocked out. The local heroes were there and busting loose as usual. Ant-Dog and I also took a stroll over to the infamous Woodbridge trails located right behind the park and they are still as hella nuts as usual. The recent storm took a bit of a toll on the jumps but they are looking way sick even after being pounded by H2O. Big props to Animal bikes for giving CJS a bunch of swag to give out to the riders for the day.
Gotta mention that flatland freestyle BMX is making a resurgence in the NJ area. Loudogg and Mark rolled in with a bunch of street rippers and all these guys were tearing it up on the basketball court next to the park. Lou was busting out crazy hitchhiker variations, all kinds of spinning insanity and too much linkage, while Mark was busting loose on the front wheel with hang nothings and more. The street boys were also killing it with all sorts of 360 stuff and bunnyhop variations. We’re all wanting to get the flatland guys together in NJ for a jam sometime this summer. There seems to be a lot of guys who want to hang and bust out with each other.

The actual comp wasn’t really a comp at all but more like everyone getting a chance to bust out with their unique brand of chillness. Super Graff the man with the mic, well the man this time with the bullhorm was MC for the day as well as semi oldest rider of the day. The A-man had his young son out there busting loose with the rest of the young dudes. All who were killing it on the small fry section of the park. Some big airs were going down on the little jump box over there. BMXing looks like it’s just gonna get nuttier in the coming years in NJ and with the current maniacs in charge of it, it’s gonna get scary.
Al and Aaron decided to try a slightly different format for the jam this time. They let the guys bust out in three different areas. The 6′ quarter for a highest air and variation showdown, the grind rails for some street and grinding studliness and the hip of the mini-ramp for more aerial looniness. With local badazzes like Seawright, One Eye Joe, Evan Smedley, and Spanish John in the house, you know the sheeot was gonna get pyscho. And it did. Way high airs topping out at 8′, tailwhips, CRANKED lookbacks, lookdowns, flatties so flat they were unflat and upside down. The locals of NJ have got it going on. No one was really super concerned with who was winning but everyone was cheering on the banger tricks that were being unleashed upon the crowd. Who had the banginest banger of the day? Seawright. Double whip over the hip, check the sequence. Word was out that he had to pull it just so I could have something cool to write about. Hip double whip for the ladies and gents.
2007 looks to be THE year for BMX in NJ, whether it is racing, freestyle, flatland, whatever your poison it will be off the hook this year. With all the people taking an interest in getting the word out, all the good lads and lasses out there pushing the sport into peoples minds and faces. BMX and NJ will be the names to be remembered. Thanks to CJS and Woodbridge Township for letting us get our bike on. See everyone at the next BMX hoedown. Peace.