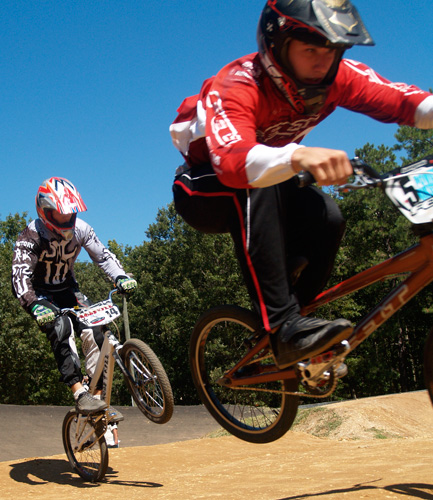 The last blast gasp before the NBL State Championship at HCBMX dropped down on Egg Harbor Township on Sept. 15th. Of course it couldn’t just be nice and easy for the BMXers, instead good ol momma nature decided to drop some heavy rain on EHT before the race and the day of the jam it looked like things might not get any better. Large puddles had accumulated on the track and things were looking tense. The crew pulled together again for a broom-shovel-dam making fest and got the track in decent shape to start practice a bit after 12 pm. After about an hour of practice the soil of EHT was packed and ready to be rocked on again by the boys and gals of BMXland. Before the racing got underway a heavy jumping session took place on the doubles by the announcers tower and Victair Behm, Mike Schneider, Mulhern and a few other crankoholics were lensed airing the set. Word was going around that Victor had torn it up at a dirt jumping contest at Patmos Skatepark a week or so before. He was skying big time so it comes as no surprise. Practice went down smooth but with a twist this time. Glen Knapper from NJ alumni track TPBMX had acquired the random gate start box and had a discussion with the pro-am guys about using it for the race. A unanimous “hell ya” went down and NJ’s first “random gate pro practice” went down. People were actually asking the PA system to be turned down so they could hear how the random gate sounded. (or it could just have been my corny music selections…) Crazy props to Glen and the crew of the Hyper Pro-Am series in getting NJ once again on the map as the first state to run the random gate at local races. (jeesh and they say Florida leads the way…pu…leeze.) The usual suspects were seen tearing it up. Rob Bennett (SC Action Sports-Redline) and Crazy Craig Wilson (GHP Atomlab-NE) were battling back and forth in OM X class 35+ with the A-Dog dropping in for 3rd. 17-24 (warm up for the Pro-Am class) X was overrun by Massive Matt Kelty with the ladies man Dan Smith dropping in for the deuce. Many of the guys in that class were still panting from running the Pro-Am final mere moments before. Gary Transue (PPB) and Lee Matos (GHP) went 1 and 2 for their teams in 16 X. That also happens to be the way the teams are running this year as well. 11 expert saw Paul Fillipone drop the bomb in that class once again with Austin “where’s my picture brittles?” Padilla taking the second. The young guys are already spying on what they need to learn for when they step into the Pro-Am series in a few years. The main man Matty Cranmer ripped it up in 10X action doing it for his bro’s new shop SC Action Sports. Matty has to be one of the toughest kids out there, I’ve seen him go down hard in one moto and bounce up and kick the ballistics in the next. The racing was intense as par usual in the Hyper Pro-Am with quite a few guys busting loose for the final shot at points before the championship at HCBMX in October. The top 8 guys in points will be getting a piece of the year end overall purse so you know the men were feeling the need for speed. Steve Weimar cruised in and was flying through all the motos. The Ladies Man Dan was kicking it big as well dicing back and forth with The Tractor Jim Mulhern. Matt Kelty stopped by and trounced his motos but the main would prove a little tougher for Matthew. Amazingly enough Tim Cummings was able to keep the trash talking to enough of a minimum to qualify to the main along with Rich Farside whose new nickname is “The Squeaker” after just making it through the motos, you can’t keep an old dog down. When main time rolled around the pack was pretty tight all the way to the last turn when a crazy move by Kelty put the brakes on everyone and took down half the pack. Weimar slid in for the uno, underdog J-Knap pulled the second and Farside creaked past the carnage for the 3rd. Another crazy day of racing was capped by these guys over the weekend. It’s been a great year for everyone and the Hyper Pro-Am has really show what the older guys are capable of. This has been an up year for the racers in NJ and it should only get better in 2008 as the approaching televised big money race series being put together by Greg Hill of GHP puts racing back into the forefront of the masses minds. Check the pics below. Viva la BMX baby!