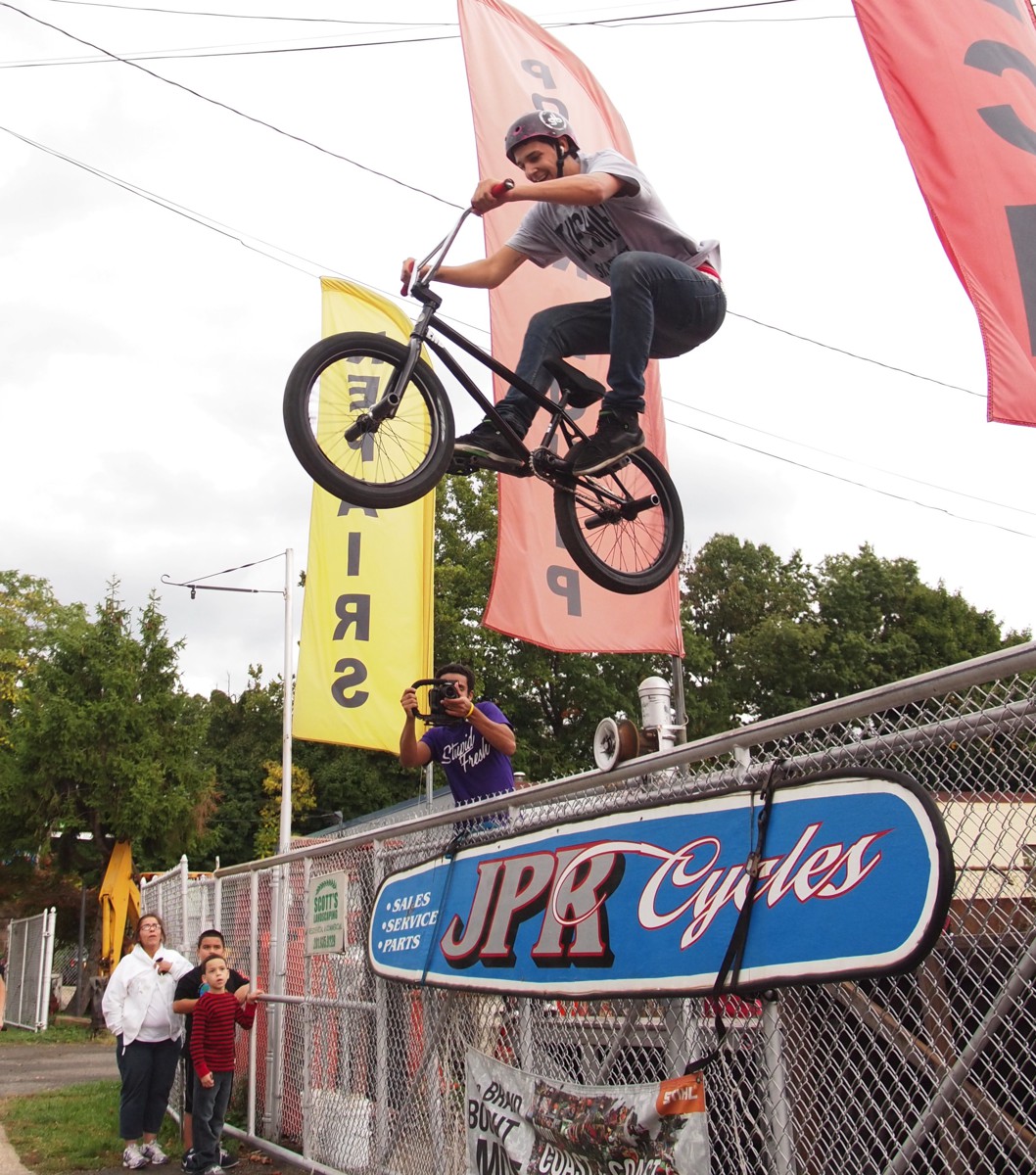 Go north young man.
Though I wasn’t going to be able to make this jam but some last minute reschedulings opened up time to hustle to Lyndhurst and scope out what was going down. JPR Cycles opens up their lot adjacent to the shop every year for a comp to let the local dudes have at it. 2012 was no exception and they got a long list of sponsors to help out. Profile, Shadow, Kink, Primo, Eastern and S&M released swag to give out to the assembled BMX masses. Event organizer Ed Scott warmed everyone up with a impromptu bunnyhop contest which was taken by Oscar. There were over 50 dudes ripping up the JPR course that day but only 18 decided to roll the dice and bust loose in the “Am Jam”. Ed assembled the judges and got things going a little after 1:00.

Well known North Jersey street dawg, Brazil looked to be an early show in to make the finals hitting lots of big lines and technical stuff off the banana box. Shane was throwing down BIG on the hubba box, lofting huge superman one handers over it like it had a transition instead of a bank. Mark M. spent lots of time on the banana jump as well and had variations for miles off that mug. As big as he was going though, he was unable to get past Mark for the spot in the finals. Underdog, Zee Bainsey paced himself throughout the jam and got the third spot in the jam for the final two minutes of madness.

When Ed let the stopwatch roll, the crowd went nuts and Zee, Brazil, and Mark decimated the JPR ramps. Zee had lots of technical tricks on the wedge and was getting loose on the hubba but Mark and Brazil decided to take everything up a notch and have a fence jumping contest. Everyone ran over to the edge of the lot and Brazil skied over the fence first, came back around and put down a toboggan air in the sky above it. Mark hit the pause button, lofted it, then took it to the next level with a barspin up and over the 8′ fence. The crowd flagged down the oncoming cars and promptly went ballistic with the sickness of that manuever. With that, the judges called it for Mark Meeuwissem this time around, Brazil took the 2nd and Zee rocked the 3rd. All these guys were putting it down pretty hard that day.

After the jam, Ed got bizay with the product and sticker toss for the mass crew of riders that were there all day long. Everyone as pretty stoked on the day and walked away more pumped on the BMX than ever. Big ups to JPR’s owner, Jeff, who lets all this craziness go down every year in his lot.