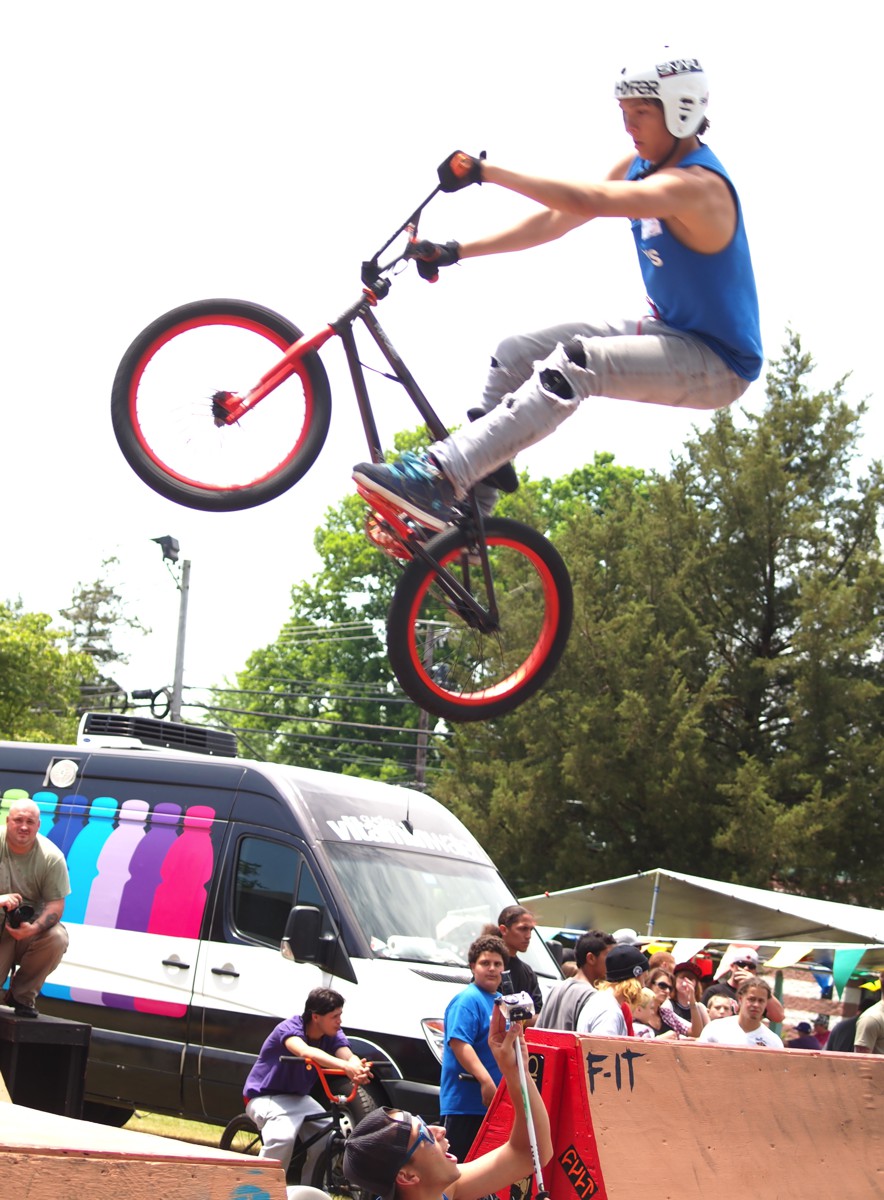 Dang. It’s hard to believe that it has been over 3 years since I first met Ed and his crew at a contest in Flemington, NJ. I had heard rumors of this place for months prior to meeting Ed and 5 minutes after talking to him I knew he was the real deal. 30 seconds after seeing his guys decimate Shields, I knew that the South Jersey scene was just as strong as it always has been.

When he invited me out to his “little” event he called Ed’s Games that year I made a promise to check this thing out and get the scoop on the Vineland scene.

It was incredible. A local bike shop had built a huge following with a bunch of amazing riders and was attracting people from all over just to come out and ride in their lot on a ramp, a bunnyhop bar and a grind box. It wasn’t about the ramps though, it was about the vibe. When you were there at this shop you were at not only a BMX only bike shop, (and when I say only I mean ONLY) but a shop who’s history dated back to the beginning of BMX in New Jersey. This place was the real deal and there was no denying it.

Spinning the wheels to 2012 and Ed’s Games has grown into a must be at event at the beginning of summer for not only New Jersey but now…the entire BMX industry.

Has any of the notoriety changed the way Ed runs the day or where his heart is at with the local crew? Well let me relate a story Ed told me to on the day of the games. In order to ride at Ed’s Games you have to sign a waiver to keep liability issues at a minimum. When one of the parents signing the waiver was talking to Ed they lamented that the classes had no age or skill divisions. Ed’s response was, well this isn’t a real full on competition, this is a customer appreciation day, a way to give back to everyone who supports my shop and my business all year long, it’s more about everyone having a good time, not really who wins any of the little competitions that I have.

I really think that sums up why this “little” late spring event is getting so popular. It’s about the local riders. It’s about having fun. It’s about giving back to BMX. The riders get it and that’s why Ed’s shop has the notoriety that it does. Sure the companies send out their pros to say hi and chill with the locals butthe day isn’t about the pros it’s about the locals and the lifeblood of BMX, their scene.

With all that being said, Ed’s Games IV was a great time, bigger than last year and even if you didn’t win or place in one of the comps if you hung out during the day, you went home with something. Ed had garnered over $15,000 dollars worth of prizes to give out in raffles and every last piece of product was tossed out that day. Beyond the product there was free food and beverage for all the riders and parents and friends who were hanging out all day, so yea, this was definitely all about customer appreciation.

And, yea, the customer’s were appreciating. They were especially appreciative of the course. Ed had once again upped the ante and added a wallride, 4′ jump box, hip and redid the spine this year at 5′. It was a pretty sweet little street course set up there and quite frankly the locals were outdoing some of the pros on the ramps.

As is tradition…(a veiled South Park reference right there…) Ed started with the bunnyhop competition. Anyone who signed up was allowed to enter but it was quickly clear that a couple guys were gonna stand out in this thing. Courtney Freeman and Jim Bario got busy early on out hopping each other, pushing the rest of the field to the back and inching past 3rd place hopper Ryan Nikanonta. The stick got popped to 48″ and both guys went over after several tries. The heat was on and the bar went to 49″, and again it was close but both guys cleared the height. Then it was on to 50″!…unfortunately by then the fatigue of over 60 or 70 huge bunnyhops had taken their toll and the gents stayed at 49″. A first for Ed’s Games though with a tie in the bunnyhop comp.

Next up was some grindbox action. A lot of the locals were looking for Delmont Mayor Mike Paton to come back and pull an upset but a late night and super painful calf gash put the dampers on Mike getting up to his usual insance grind antics. Zach Schagle was stomping with lots of great stuff till his chain blew off mid way through, he attempted to keep his runs going but eventually opted to rock Dalton Spitznogle’s scoot and proceeded to wreck some saran wrap gaps over the coffin and then an insane gap from one grind box to the other. All that though wasn’t even to crack top 3. Bryan Carter must have had a magnet on his back

peg because he was sliding the whole distance of the big box on that mug and 180ing out of it. Icepicks at maximum length brought Carter third place simoleans. Mark Burnett nos
Wrapping up the day everyone moved over the now expanded street course to see who was gonna drop the trick of the day on the ramps. If you wanted to see different styles of riding this afternoon was the time to get your eyeballs intoxicated. Gatorade Freeflow Tour Winners Vinnie Mannino and Corey Bergler were on hand and were throwing big on the ramps. Vinnie flipped the spine and bar 3’d the spine to wedge while Corey flaired from the spine to the wedge. These guys put the time in and it shows. Locals Chris Przywara and Ant Bolash were getting it done as well. Ant ripped a massive fufanu off the corner rail on the 5′ quarter that had jaws needing band aids. Tristan Kemp was getting all tuck nasty on the quarter. Hyper’s main micro man, Shane Goldsmid was busting loose with some hardcore transfers from the spine to…well most of the time flat on the other side of the box jump. Shane was going for the tuck no hander across it but didn’t quite get there, the gap he was clearing though was nuts enough. If you ever asked Ed which one of his riders drove him the most crazy but also was a cool cat and style monger all at the same time, he would no doubt answer Frankie Day. The young shredder does not stop riding the minute he gets to a spot and today he was on fahr. (yea I spelled fire wrong, whad, you wanna fide about dit??) Frantic Frankie was popping tricks left and right from whips to flairs but the bomber he laid down today would put the man in the top spot. This trick wasso tech that it is almost impossible to describe correctly…let me see if I get this correct… A barspin 540 footjam nosepick. Yes, the Frankenrider popped out smooth as butter, spun the bars, jammed his foot, spun on the frontie and blithely dropped right back in like he does this daily for milk money. After that the judges hung it up and declared Day deh man of the day. 2nd place went down to Mr. Bolash for the pocket fufanu and 3rd to Corey B and the crazy flair transfer.e wheelied into 2nd with a smith to nose wheelie to bar…just barely slipping a hand off the grip. The grindmaster for the day though was the man who just picked his bike up by the biceps and hefted it 49″ and that was Jim Borio again. Jim was getting busy with smith to 180 whips off that thing and the judges dropped him the ace and a new frame for his troubles.With that…well with that normally a day is over, everyone goes home and that’s that. At Ed’s thoughwell…it was about half way there. A quick game of footdown for a frame and then a MASSIVE raffle where soooo many people walked away with goods that it was like Christmas in June. Customer appreciation day ain’t the word, Ed and Carol know how to make everyone feel like they are the schiz.But after that though the crowd wound down a bit and it was left to all the locals to continue doing what they always do…hang out at a killer NJ shop and rip up the ramps, talk some shite and have fun.And when you take all the other B.S. away from BMX that’s why any of us, from the young dude or dudette who just got a bike and is starting out to the local shredder, to the sponsored and sometimes underpaid pro, to the old ferts who putter around like myself and say, “I remember when…” get on one of these 20″ BMX bikes to begin with. So we can have a good time. We’ll be back next year at Ed’s to embibe in more of the F word and live BMX the way it should be, having a good time.