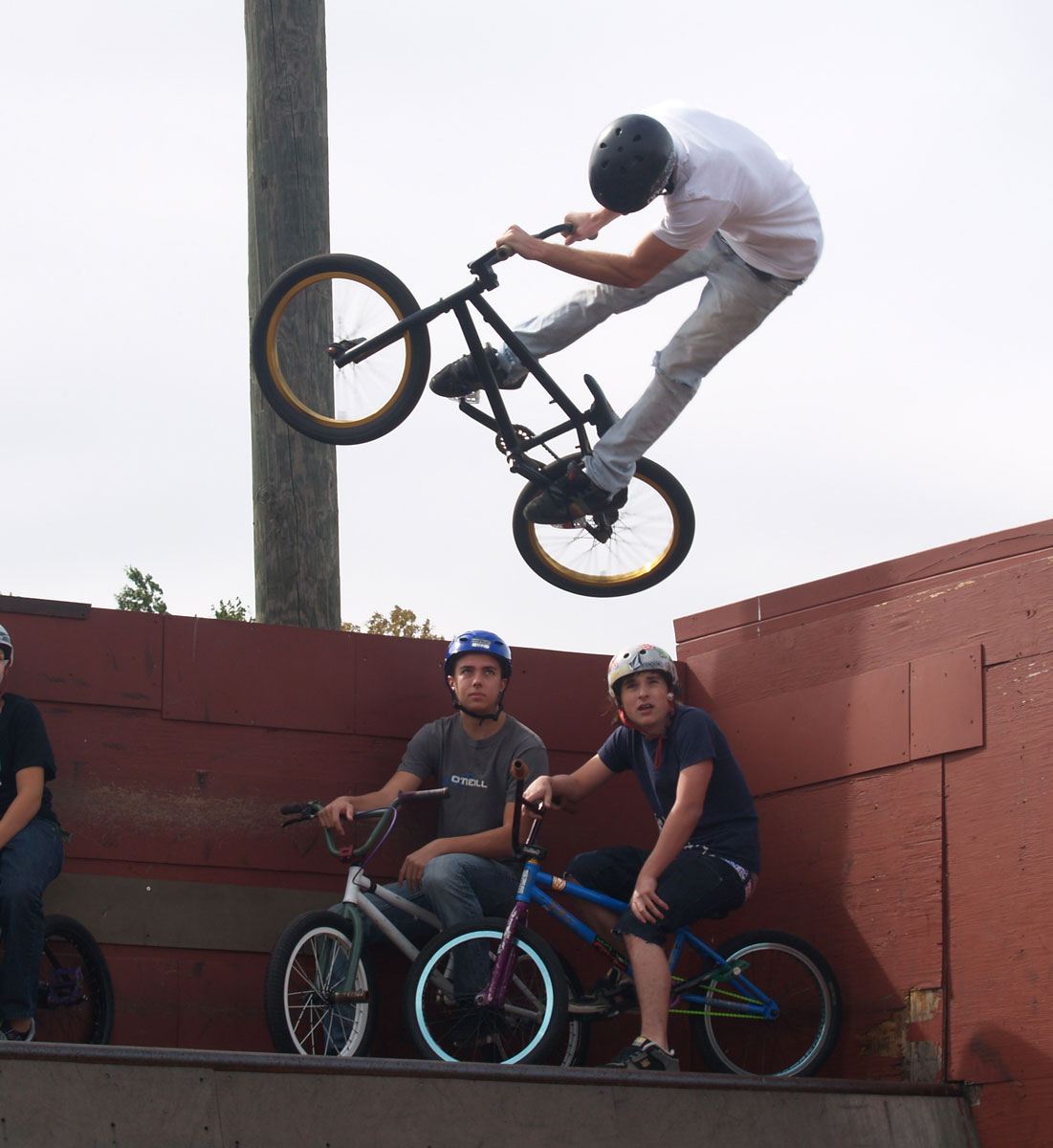 Yo..um dateline October 10, 2009. Unreal man. It is crazy to think that we are already in year 3 of Crazy Bill Jones throwing down his fall jammie in conjunction with the Ken Cornell Wheel Park. Somerville was once again invaded by the mongrel hordes of BMX freestyling enthusiasts on October 10th. Never one to miss a good time in my old neighborhood, the BMXNJ crew (moi) headed up there to see what was going on in the county of Somerset.

For the second year in a row, the fall weather gods got together and decided to jack with everyone’s minds by letting a few early morning showers drop on the guys. Determination won through though and Ken was out there sweeping the water off the course with a few assistants doing the leaf blower trick to get the park dry in time for a later afternoon start on the festivities. Ken and Bill had a new sponsor this year for the comp, Somerville Bicycle Shop . The place is run by Gilberth Valverde who is an Elite Road Cyclist and a transplant from Costa Rica. The guy is very cool and down with helping out the area’s cycling scene in any way he can. This time he came out with tons of BMX goodies for the top guys in all the classes. It’s good to see other cycling disciplines helping each other out.

After the crew got the park dried up Bill closed down registration and practice began for awhile so that the riders could get some time in before flinging themselves off the plywood once again. There was quite a few younger dudes out there kicking at this jam which shows that the future of BMX freestyling is looking pretty good. Bill even went ahead and took the youngest bros and put them in their own class so they wouldn’t have to compete with older experienced guys.

Practice was off the hook and a whole passle of guys were out there knocking it off the hook. Speed Smeade, Money Mike, Herbison, a lot of the usual crew of over the top riders had come out to lend a hand. When it came time to start the comp though a lot of the older guys hung back and instead went ahead and judged the comp for the day. Always a good thing having the dudes who actually ride do the judging.

Like I said earlier Bill was cool enough to take a couple of the newbs who had never hit up a comp before and drop them into their own class so they would get a feel for competing without too much of the stress of going against older riders. The 10 and under class was those guys. 2 younguns came out and tore up the course. Bane Tindall and Dylan Ballback. For little dudes they gave it their all out there and
though the final order was Dylan first and Bane second, both of them pushed their limits. Was also pretty cool to see someone else rocking the SE Quadangle!

Beginners were up next and there was one stand out dude who had style for kilometers (BMXNJ endorses the metric system) and mad variations. But before we reveal that guys moniker we gotta talk about the dynamic duo of Gary and Kyle Chalmers. The older bro just started riding not too long ago and was already busting loose with 360’s and big airs on the Somerville wall. It was pretty cool to see 2 brothers out there stomping the course together. I guess we’ll call them The Chalmers Duo from now on. The vunder dude in beginner was Sam Matatsuk. The kid came out on his dialed green machine and was cranking all kind of aerial variations from can cans to top side 1 footers. Big flattie and no hander transfers were also on the menu for the man and he walked away with fat first and a grab bag of killer swag for the day. Sam was so good that Bill gave him the official, “You’re moving up to intermediate”, congratulation when he won. Props to NJ’s newest inter freestyle competitor.

There were a lot of familiar names in the intermediate class. Bentivenga, Spooner, Palonis, Koval. Plenty of rippers out there doing thar thang in the now dry land of Somerset County. Although Ben Bentivenga was flowing the course pretty well this time around it wasn’t enough to crack the top 3 in the class. Mixmaster DJ Palonis slipped into the 3rd spot this time around with some killah airs and smooth riding in the park. Second in intermediate was scarfed upon by Mike Spooner. The spoonmeister had more than a few good hip transfers and was all over the wall ride. First was taken by a romper who is not unfamiliar with the top spot at the local comp podiums, Chris Koval. Koval kranked a butt load of variations over the box jump with x’s, nac nac to can can’s and plenty of nasty transfers on the quarters. Chris has stepped over from the realm of racing and is completely taking over the freestyle realm in that area. Skills on the track translate to skills in the park. Number one and plenty of prizes for Koval this time. Shouldn’t be long before we see him moving up as well!

Last class of the day was the Advanced Bad A** bombblast bros. Though plenty of oder guys came out to chill at the comp, a lot of them hung back and just rode the park for the day. Money Mike, Speed Meade came out during practices and popped off a few big tricks to entertain the crowd. Sometimes people wonder why the older guys will come out and then not ride the comp. I can sorta see why guys would hang back and not just compete all the time. The older guys who have been into it for awhile can only take home so many forks, handelbars, pedals, frames before it sort of starts to get to be the same thing and it’s best to just chill and relax with your bros once in a while and let the next group of guys who deserve some props come up and get it. It’s great though to see all the guys come out and support each other whether they are competing or not.

The actual class though had 3 rippers in it. Ed Herbison, Tom Manna, and Brandon Jones. These guys all have their own style and rip it up with some pretty wild stuff. Tom was throwing down some big variations and had some killah one footed flatties over the hip jump. Ed had his tuck tuck, bar endo, variations fully flowing the park this day and the crowd was digging on it. The dude has a one of a kind style that shows in every comp and jam. Just going out and busting an air a whilst throwing a hand back all casual style should give you an idea of what the dude is about. Ed also has his own website called teamlmnop.blogspot.com where there is plenty of cool web edits and news on his local scene. Scope it! The man of the day though, the head d o g was none other than Brandon Jones. Brandon is continuing moving up the ladder in the NJ comp scene and he threw it down pretty hard this day. Double whips, 1 hand no foot hip transfers, and the out of control…well some guys call it a downside whip but from my old school eyes, it looks like a decade air. Not too many guys on the Dew Tour drop that one and Brandon has it pretty much wired. This comp Brandon got the nod from the judges and walked away with a schweet Mirraco Black Pearl in bright green. (80’s style) All the guys in the class were stoked at the end of the day and were pretty much congratulating each other on their runs. It eventuallly went down, Manna 3rd, Herbison 2nd and Brandon 1st.

So that was it for another year of the Crazy Bill Jones comp. Ken Cornell should be commended for getting the park going as usual and all his hard work out there in Somerset for the BMX crowd. Somerville Bicycles gets huge props for donating tons of swag for the guys to scarf on for prizes and of course all the volunteers who cleaned off the course and the ladies who did registration. Bill is pushing hard for another comp in the spring and if it goes down, we’ll be there to cover it. If you are ever in the Somerville area, go check out the park and Somerville Bicycles.

We’ll see ya at the next bo-jammie,