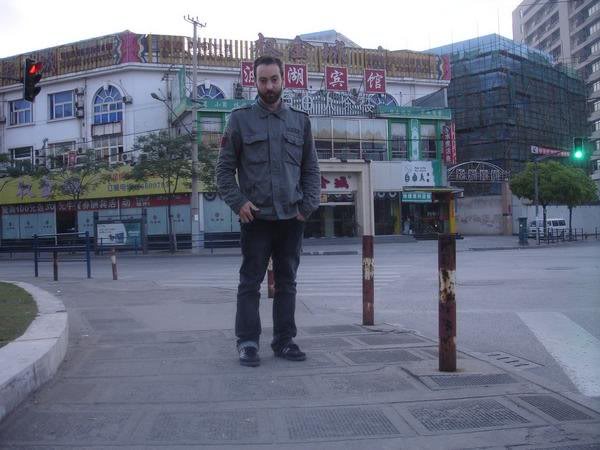 JerseyCity-There are a few select humans, including athletes, who have decided throughout their lifetime that eating meat wasn’t for them. Such is the case for professional journalist and BMX flatlander Brian Tunney.

Tunney was not always a vegetarian as a young person, he worked in a burger joint for six years before, during, and after college. So he was accustomed to meat.

“From 1993 through 1996, I lived at college with my brother and a revolving door of roommates, whom were mostly straight edge and/or vegan,” said Tunney. “I was neither, but was constantly around it and accustomed to the lifestyle.”

During his second year of college, he took some classes about physical evolution, which furthered his curiosity even more.

“That seemed to strike a chord with me,” said Tunney. “Coupled with getting really sick at the college dining hall and constantly being around vegetarians, I decided to give it a try.”

Tunney didn’t jump straight into becoming a vegetarian cold turkey. He eased his way into it and slowly made the transfer from carnivore to herbivore.

“I stopped eating read meat,” said Tunney. “Then chicken, and slowly continued to explore other dietary options away from red meat, dairy, and eggs.”

There were many different contributing factors as to why Tunney went in the direction he is in today.

“One was the thought that I thought we weren’t physically designed to eat or digest meat,” said Tunney. “Two was that I was surrounded by close friends and family that were already well on that path.

“Three was that I was at college, in NJ, in the mid ’90s and it was easy (and cheaper) to do than eating meat,” said Tunney. “Four was that I worked as a short order cook in a burger joint for six years before, during and after college, so I had already handled and cooked a lifetime of hamburgers, hot dogs, bacon and chicken fingers by the time I was 21.”

Arguments can easily happen between a person who eats meat and a person who chooses not to, but Tunney and his fiancé, Heather Duby have learned to work around it.

It causes arguments between myself and Heather,” said Tunney. “We make a lot of compromises on a gastronomic level though, so it all works out”

With his lifestyle choice of being a vegetarian it really hasn’t changed Tunney much as the person he has become.

“As for my lifestyle, I don’t necessarily remember how I felt before I stopped eating meat,” said Tunney. “But I like to think I’m doing my duty karmically for animals and the environment, which is another side benefit of vegetarianism that I didn’t know when I started.”

“Eating meat puts a huge strain on the global environment,” said Tunney. “It’s to the point now where I don’t even think about it really.”

For Tunney, since he is a professional journalist and flatlander he must travel all over the world with other professionals, even some that do not live the vegetarian lifestyle.

However, he is lucky enough to have few friends that are vegetarians so it is not the big of deal for him.

“I tended to travel in the company of other BMXers,” said Tunney. “Who were also on the same level as me from a dietary standpoint.”

Although some of the BMXers he has traveled with are vegetarian, most of his friends are not. Therefore he doesn’t judge anyone about their food preferences.

“I try to stay as non-judgmental about other people’s diets as I can,” said Tunney. “I’d never want to pick a friend based on their eating preferences. I don’t mind being around people that are eating meat or being around meat in general.”

Although his parents aren’t vegetarians, they still respect his decision for not eating meat.

“I didn’t make my decision to stop eating meat until after I was already out of the house,” said Tunney. “Both of my parents respect the decision through and through though, and there’s a decent Thai or Chinese restaurant in most towns if we go out to eat.”

Tunney has been traveling all over and riding flatland for 23 years since 1987, with the years of experience he was able to gain a sponsor.

“I did get sponsored by Clif bar for a time,” said Tunney. “And I think my vegetarianism helped make that happen.”

Even without the help of eating meat Tunney feels that his is more health-oriented now because of his vegetarianism.

“I learned from an early age to read ingredients, shop locally and eat organic,” said Tunney. “Those are all buzz words nowadays because everyone is overweight or diabetic and the Earth is nearing catastrophic carbon levels.

Tunney follows his diet strictly, although they are sometimes where he accidently eats something with a milk-by product in it.

“Sometimes I slip up with a milk by-product in something or other,” said Tunney. “It’s really easy to do nowadays. Veganism has gotten out there as a sensible diet instead of a radical reaction.”

For Tunney, eating meat anytime soon doesn’t seem like something that will happen, as it now appears foreign to him.

“I don’t think I could do it,” said Tunney. “The longer I’ve gone without it, the more alien it seems to me.

“Having said that, it’s just my decision to not eat it and that’s all.”