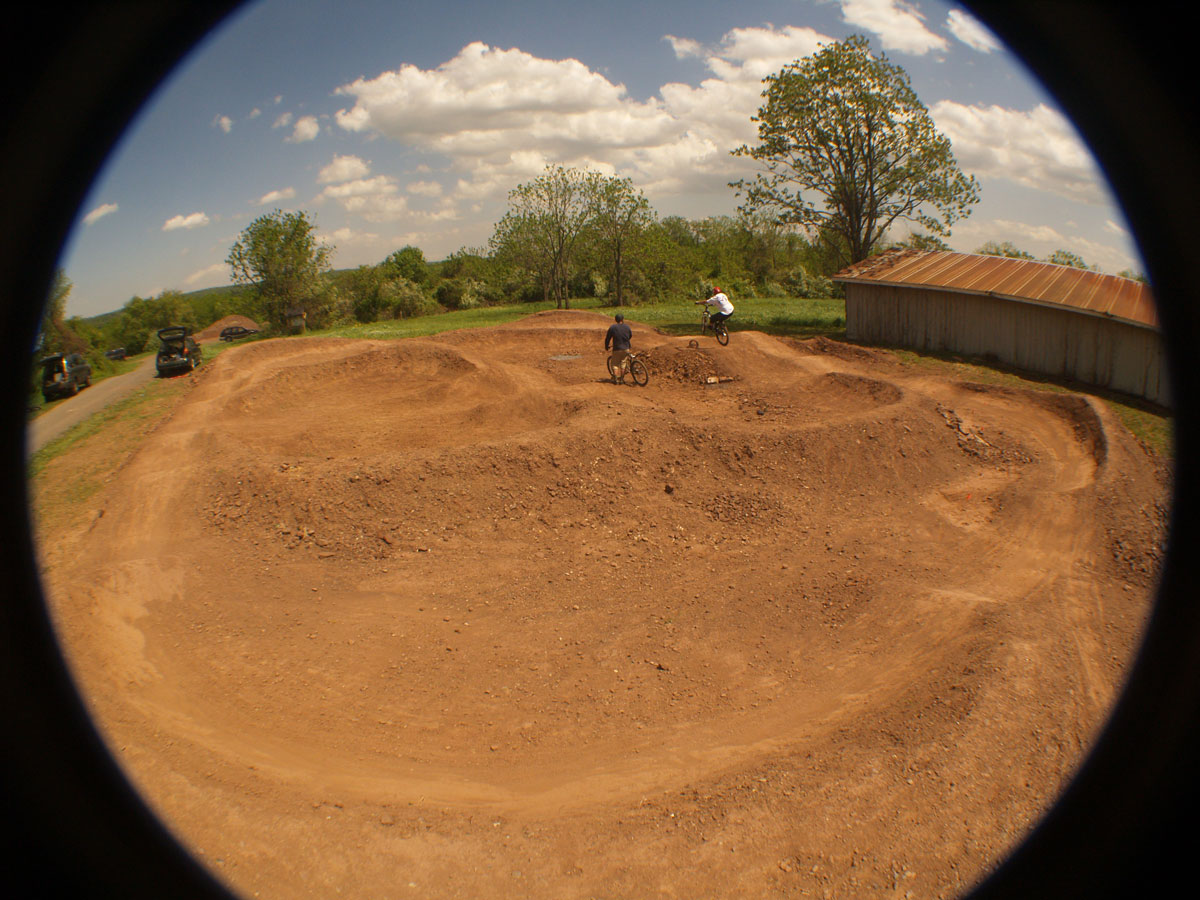 BMXNJ made the trek up to Milford, NJ again this past Saturday for another round of digging the hard Hunterdon County clay. As with all great things sooner or later the construction phase begins to wind down and the actual use of the project begins. I’m pretty stoked to say that on May 8th, 2010 at about 1:00, New Jersey’s first public pump track was completely rideable. Though not completely worn in to the point of perfection, the track was pretty much at a usable state by that time and the few of us left that afternoon on that breezy day were left to start the process of “riding it in”.

Before I get into what it’s like to squirt around one of these things, I gotta give props to all the people who made this a reality out there for the NJ cycling community, Bob Adase, Doug, Cody, Leif, Sherry, Bobby B, Michael, Nellie, Pat B., Tom, Dan, JD and all the people who came out in support of this idea. For these people to go from 7 months ago just having an idea to hitting the full track this past weekend is just amazing and shows the kind of selfless dedication that is so prevalent with people who are down with the cause. In the short 3 days that I went up there it was pretty apparent how much love everyone has for riding and how accepting and encouraging they all are of the BMX aspect of biking. It’s been really refreshing being around people who are all involved in a cause for the right reasons. With this foothold in NJ for pump tracks, I am thinking we are about to see a big explosion of this type of facility across the state. The expenditure to the town, barring a small 5,000 square foot piece of land is nothing. So right there you are looking at a great community activity that everyone can enjoy at NO COST TO THE TAXPAYER… Ain’t us bicyclers just grand?  :-)What’s it like to ride one of these things. Well if you rode BMX during the 80’s, riding a pump track will take you right back there. It’s fun and with the right amount of skill, fast and challenging. The lines are numerous as the layouts to these are not just a u in a u or a oval they criss cross back and forth and allow for lines almost like a skatepark but without the chaotic nature of it. I was actually pretty surprised at how well the BMX bike was handling the track and after a few laps actually started trying to jump some of the stuff there. As much fun and as easy as it was to get going on, watching someone who really knows how to  handle a bike on one of these things is another story all together. While we were running the dirt in up there, Lars Tribus  stopped by with his wife and kids and started ripping the place up, truly showing the possibilities of what can be done on something as simple as a pump track. He was even able to teach an old dog like me a few new lines to get maximum enjoyment out of the layout. As much as all of us older guys were having it was truly apparent what kind of enormous impact this was going to have on the cycling community and even more specifically BMX as we saw kids come up with their parents, go out on the track and just have a good time, smiling and laughing without any of the intimidation factor of a full on track. This was nowhere more apparent than when Lars had his 18 month old son out there scooting all over this thing and the big smile coming off of him. With all that being laid down for posterity in the typewritten word, it now all comes down to opening day, June 5th 2010, when Milford, New Jersey makes history with the official grand opening of NJ’s First Public Pump Track. In 1976, Millville had the first BMX racing track, in 2010 Milford has the first public off road bike track. The future is limitless now with people like those in charge of JORBA  and this track helping the BMX community with stuff like this. BMXNJ encourages everyone to head up to Alexandria Park in Milford, NJ and have a good time riding their bike. Thanks JORBA, Bob and the whole crew for being such great hosts to me when I was tossing some dirt with you all!