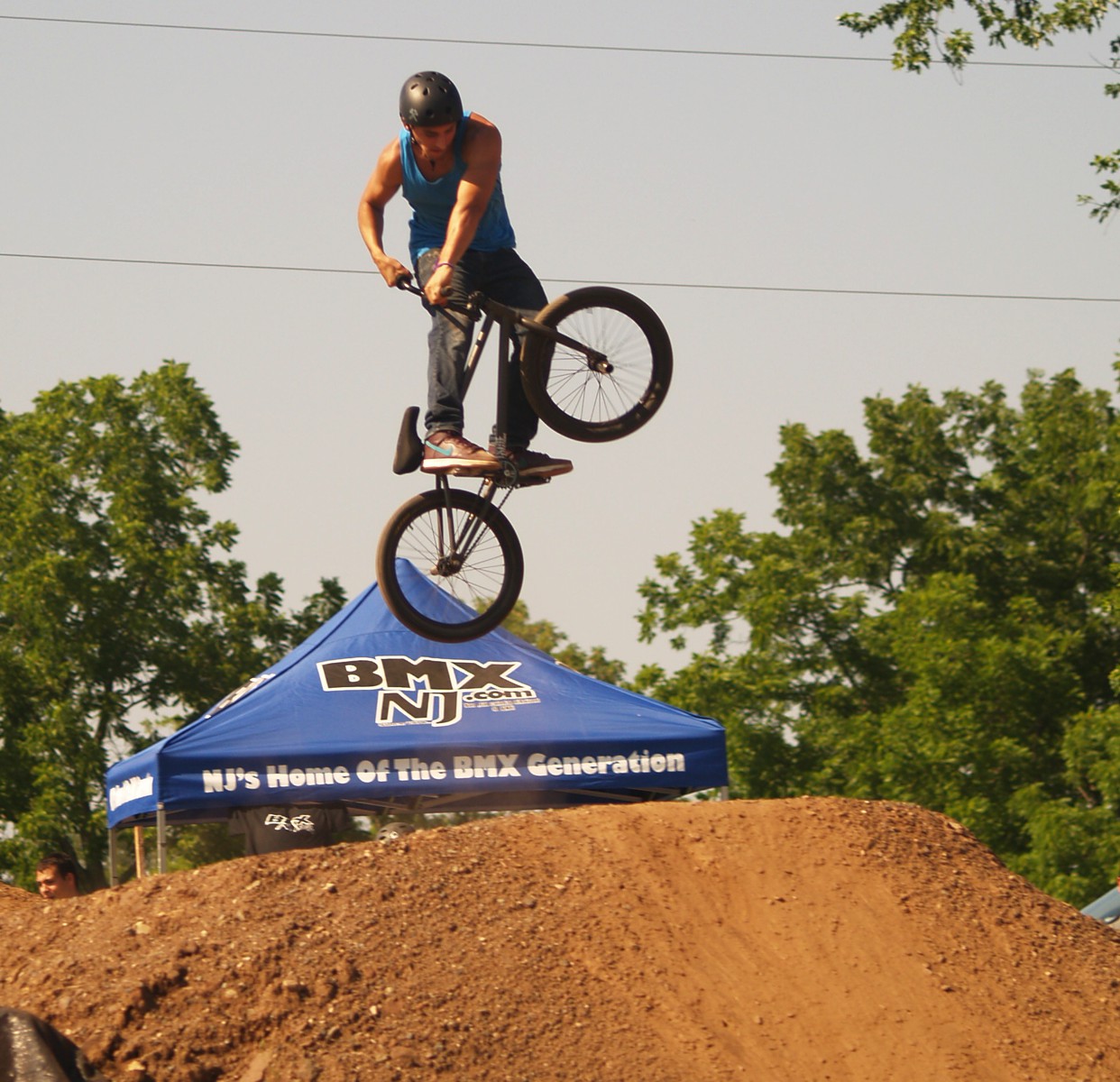 A few years ago I sorta put my foot firmly in my mouth in predicting that pump tracks were going to take over in the avenue of public BMX riding in New Jersey. Luckily Robert Adase and the Alexandria Pump Track crew came through in 2010 and dropped a nice oval in the rolling hills of Hunterdon County. We documented that piece of biking history last year here…and unfortunately missed their first jam in October of last year. This year however the APT crew put together a big event for the summer, got a bunch of bands together and took over the park for a day of dirt, bikes, music and fun.

Sponsors Bike King, Cutters Bike Shop, Shields Skatepark, Free2Ride.com, Dn’A Screen Printing & Graphic Design, EWR Bikes, and OK Truck and Auto put together a bunch of stuff to give out to winners in a bunch of events.

Yea instead of the usual racing or freestyle comp, Rob put together a bunch of different mellow things for everyone to try out. Time trials; jump lines, best trick, and highest air, just a bunch of cool stuff to do in the dirt.

Oh, jump line. Alexandria is the first PUBLIC dirt jumping area in New Jersey that is legal to ride. Built and shaped with major help from Aaron Graf, the line has two sets of triples that you can either jump or roll if you can’t make it fully over. Though not as radical as say Radiation, or Catty, they are what they are designed to be, a place for the average kid to have some fun jumping their bike, and let’s face it, that’s sorta why most of us started this BMX thing.

When I got to the jam on Saturday, the music was already kicking and the riders were having a killer time on that jump line and pump track. The Gills were chilling up there having a good time off from racing, the Mathews, Aaron G of course, Don from Dutch Neck Trails, tons of local dudes were rocking the jumps, even local heroes Eric Marion and Dean “deh machine” Watson showed up to wow the locals with some top notch trick rideatating.

Rob had a solid day planned and started off with some relaxed time trial races. 1 lap for the little dudes and 3 laps for the older guys. It was pretty cool to see some different style of racing,..that also did not have a lot of drama and stress attached to it. The little dudes had Najee Hudgins winning, with the older guys being won by Aaron Graf.

Next up the APT crew brought out the high air pole and let the riders go at it. 2’, 3’, 4’…..5’ all the way to 6’. The battle to see who could get highest was intense. Craziest air of the day was Brett Matthews busting 4.5’, though not the winning air, he’s only 10 so basically the dude was jumping as high as himself. I don’t have the name of the guy who won but he busted 6’ and did it while having a towel hanging out of his back pants pocket. ‘core.

After some more chilling on the jumps and track, they called the best jump line comp. Eric Marion, Dean Watson, John Gill, and a bunch of other dudes got busy on the 2 sets of jumps. With two different lines to hit it was pretty cool to see real young dudes kicking air alongside the older guys. This was probably the first public dirt-jumping contest that I’ve ever seen in NJ over 30+ years and it looked like everyone was having a good time. Eric and Dean got the swag at the end. If you’ve ever seen these guys ride you know why. They adapted pretty quickly to the line and were busting, tucks, whips, turndowns, and 360’s like nothing.

By the end of the jump line comp everyone was pretty worn out, (though crazily enough Aaron and Don, both hitting the 40 year old mark, were still out there rocking it) and ready to chill. The bands were done playing, I said goodbyes to everyone, took a couple more jumps and moseyed on back to BMXNJ HQ.

I can definitely see the pump track and jump line idea becoming a big thing in coming years for BMX in NJ. The more of these places that go in, the more kids are gonna wanna ride. The entry level to riding is pretty low, dirt is easy to change up to make things more fun and different…and well…you put a kid on a bike they wanna hit jumps! I think you’ll be seeing more of these as the older BMXers and MTBers start to take a bigger hand in helping out their communities.

For now though I am stoked to say that BMXNJ witnessed more history with the First Alexandria Pump Track Rock n Ride Jam. If you get a chance, get up there and have some no stress riding fun.