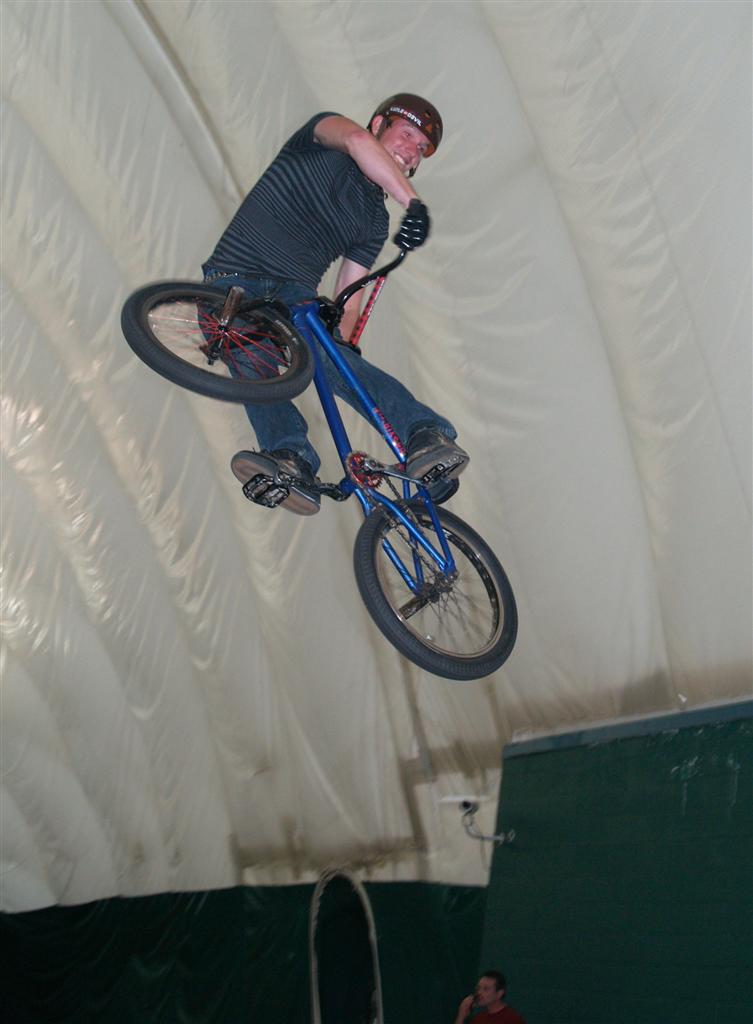 One thing that has been missing from the revamped BMXNJ site is the promised coverage of the eastern PA scene that we have up on the site. When I redid the whole thing in ’08, I realized that PA and NJ have always had a tight history of working together to help out the sport. Starting in the earliest days of racing with Blacktrack, to the days of the AFA with Charlie Huber and now with Al Dimino and his BMX Invasion comps that he has been putting on in NJ for quite awhile. Al is actually a PA native and has a spot near him that he frequents alot called “The Dome”. It’s been on his BMXInvasion site quite often and it always looked pretty cool. The layout? A pretty big inflatable dome that has a soccer field in it on one end and a huge ramp park on the other. Although the locals like Al and John Ritchie have shredded this place for some time, and always thought it would be a happening place to hold an event nobody has ever put together a comp as a reason to draw everyone up to hang out and have a good time.

We weren’t dissapointed. Upon arriving at The Dome, it became apparent that the riding that would be going on that evening would be massive and the facility was top notch. Tons of spectators were lined up on the walls and everyone seemed pretty amped on the atmosphere inside there. It also wasn’t too bad heat wise inside as the dome has some kind of A/C system cranking in there. As we were setting up, local radio station WKRZ showed up with a mondo truck and NJ-PA BMX event sponsor staple, Monster Energy Drink rolled in with plenty of free samplers to hand out.

Al gave everyone an extra half hour to warm up and show up (a big traffic jam went down on I-476 due to an accident earlier in the day) before the festivities began so we wandered the floor lensing pics and saying hi to all our bros. One big name on the northern NJ-PA scene, Kevin from Plains Bike was out in full force with a big contingent of riders for his shop. I finally got to meet a guy who I have chatted with many a times on the message boards about…BMX RACING in our arena. After more than a few laughs about that, we got ready to see what everyone could pull out of their trick lists today to impress the judges and spectators inside “The Dome”. (Man if nothing else, just calling a place the dome and holding a comp there should ominous as all get out! LOL)

I think one of the best things that was brought out at this comp was calling the classes Novice, Expert and Pro. No one at the comp was really at that super beginner level of riding where the simplest of tricks was an impossibility so with Al starting off with a novice class as the first group it made all the guys riding feel like they were accomplishing something out there. Add to that, the fact that he had secured prizes for the top 5 riders in the class and goodie bags for everyone competing and it was looking like a pretty stoked day.

So the novices were up first. Al had a kicking sound system going with wireless mic and the whole nine so the guys and crowd were pretty amped during all their runs. These guys were pretty stoked to be shredding in there and it came out in their runs. Full bore and no holds barred, everyone was tearing it up. Micro-man Shane Kelly was kicking some big airs during his run, with no-footers and an attempt at a monstrous 360 that left him laying at the edge of the bottom of the jump box. Although that stopped his first run, he came back for the second round bigger and faster than than the first with some smooth variations and transfers that dropped him into the fourth position on his 16″ green min BMX machine. Mucho talent in that young dude. Nick Polnasek grabbed the number 5 and a box full of good stuff with some cool trail inspired radness over the box and smooth lines throughout the park. Richard Loyek skied in for 3rd after busting a massive 3 6 0 and peg stalling the sub box along with big airs and variations. The top 2 spots were dominated by Plains bike. (Actually Plains Bike was all over the Dome, which is good to see. Local shops supporting the scene with guys involved in BMX who understand the sport.) Second was scarfed on by Jeff Murray (no relation to old school vert pro Tony Murray) who had some crazy big tuck no handers and variations. Joe Ide lofted his jovial jive into a first place at the Dome this time around. No foot can cans and big 360’s also were staples of his run.

After a 15 minute break to let the Expert class warm up, Al got back on the mic cranked the tunes and let the next class of BMX maniacs out to get it on. Billy Salijko came out with big leary’s (turndowns) and some monster airs, the judges dropped him in the 5th place for the day… evening? 4th was placed upon the man who attempted a fat 720 whilst about 6 feet up but let it go and still walked away, Justin Mitchell. He also did monster variations and rocked the rest of the Dome to bring home the swag. George Miller was out of control during his runs and let loose all over the wall ride and jump box as well as dropping a footjam nosepick on one of the quarters. 3rd place went to him. 2nd place was all Chris Koviak he had great speed and flow all over the park and probably got the highest jump box variations in the class. He also let loose with one huge extended can can that stoked up the crowd. Todd Kiger took home the first place box of goodness and a signature SE Deville frame. His tailwhips over the box had everyone losing it in the arena. As big as the Expert class was going this was just a warm up compred to the Pro class that was gonna be throwing down after another break and more practice.

By now the crowd was on the edge of the bleachers wanting to see what the big guns could do out on the course and the men didn’t disappoint. The cool thing about these guys is they all ride with their own styles. Ed Herbison has been working his way up the proficiency levels over the past few years and at the Dome he threw the peace sign down with his signature tuck extended no handers and barspin variations. He was rocking them on every ramp during his runs as only he can. 5th for the man with the tennis ball in the spokes! Tailwhips and lookbacks over most peoples heads were Andrew Johns ticket to the 4th place goods. Aaron Graf moved up to Pro in PA and proceeded to throwdown some pretty big moves like transferring from the back quarter pipe to the mini, tailwhiipping and no-handed 360ing the box, all for big NJ comp supporter CJS. The fact that Aaron was the oldest rider in the comp at 38 years of age was not overlooked by the crowd either, proving that you can BMX at any age. John Ritchie riding for Alienation was jammasizing all over the park that day, whether it was practice, the comp or just talking things up. During his runs though, cross footed whips, backflips and barspin variations kept him near the top of the heap at number deuce for the day.

The BMAD (Big Man At the Dome) for the day was none other than the man whose name I completely screwed up at Hackettstown not a week before, Randy Hulseburg. During practice it was obvious that Randy was riding this park a little bit above the rest of the guys there. He definitely had the flow of the place completely down. By the time the actual comp came around he turned it up a notch and was on it big time. Randy was busting an easy 6′ on the quarters and airing the vert walls on either side of the jump box. From racer style table top one footers to ninja tailwhips, the crowd was behind him. Warming up by look back 360ing the jump box he then proceeded to360 tailtap the sub box, at that point it was pretty apparent that he was gonna be the man to beat that day in the Dome. Which it turns out, he was. Randy got all the goods for the Pro class and also snagged an old school SE quadangle looptail. Definitely the top dude in Wilkes Barre that night.

After the comp, Ed kept the park open for another half hour to let everyone continue the good time and bust out. By then though Monster had left the building and the crowd was leaving the building. Big ups to Al Dimino, who even though he wasn’t throwing down in the comp that day still was giving off postive vibes to the younger riders in the crowd. One little dude was asking him how to get sponsored and how he wanted to be riding for Dan’s Comp. Al told him to go for it but not to worry so much about being sponsored as having fun riding was more important than who you were riding for. He also let him know that working is a good thing as well and how he was riding and working since he was 14 years old. Pretty solid advice from a guy who runs some of the best comps on the east coast, gets flow from Mirraco and holds down a
full time 40 hour a week job.

Since Deirdre and I had a good 3 hour drive back to the Jersey Coast we said our thank you’s and packed up our rented mobile device for the return trip.

It was pretty cool to see how the PA scene was doing up there in the land where Jim Dellavalle hails from and meet a lot of the locals. We’ll definitely be back for the next round of BMX Invasion where ever it may land. Thanks to to our hosts and the event sponsors! We had a great time!

For more about Al and BMX Invasion plus his write up and some of Rich’s (his Dad) pics. Click here: BMXINVASION.com

See you at the next BMX event,

(We’ll have video coverage on the first episode of brokenspokes BMX in a couple weeks!, see you there!)