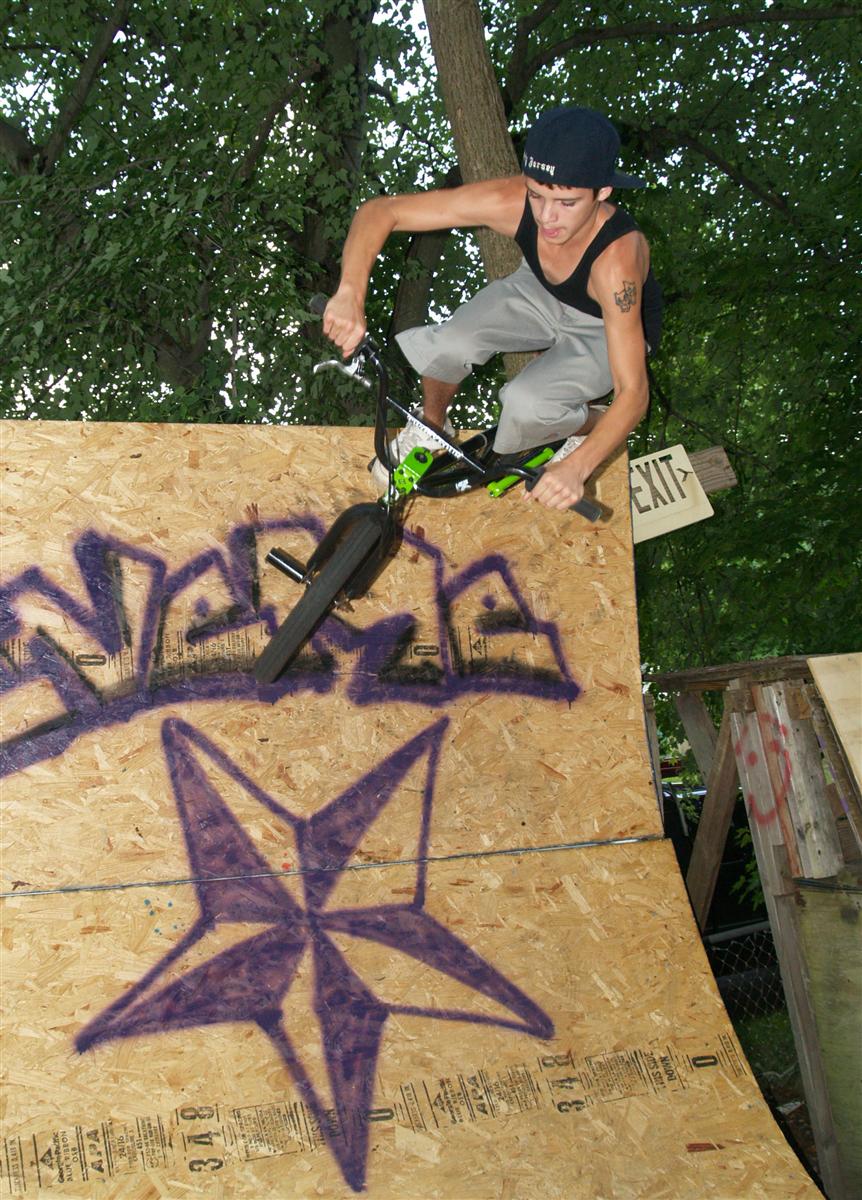 The place where organized BMX began in NJ is South Jersey. Now some people think of south NJ as anyplace below the Driscoll Bridge. Well being from Brick, I can tell you that south NJ does most definitely not begin there. It actually starts somewhere near the tail end of Toms River and goes down from there. Way down. Down to almost Delaware. Though we didn’t get that far today, thanks to my local correspondent Docjr, I was able to hit a few of the local spots down there and begin to get a feel for the scene in that area. I headed out early in the morning with my cameras in tow and no idea where I would be led off to or who would be showing up to rep the riding down there. Arriving at Doc’s mom’s house after almost being GPS’d into a lake, I was met by a large contingent of BMXers local to the Clementon area. Local’s like Eric Goldhahn, Chris Sauler, Gary Spinelli, Kevin McDowel, Andy Misoliek, Korey Austin, Matt Law, Zack McGiness, Anthony Reynolds, Robert Rassano, Zack Vixon, “DocJr” Doughtery and his son Danny were all hanging loose there chomping at the bit to go out and get some riding done. Doc gave me the tour of the local hang out which is his basement shop where the bikes are tuned and the old classics are stored. Then we were off to hit the spots! Or maybe not… We had forgotten that everyone under 17 needed a helmet to ride parks so…after some quick jostling of helmets it was decided the first course of action would be to get over the river into PA and hit up the famous FDR skate park under 195. We got there early enough so that there were only a few people there and the locals we brought out began to tear it up. This one dude named Eric seemed to be a real shredder and was blasting a lot of good lines at the place. Now for those of you who know FDR, you know that it is designed more as a place to flow than a place to really just go balls out busting huge stuff all over. We stayed there for about an hour sessioning up the place and taking in the history of one of the east coasts most famous skate parks.

Doc being the ringleader this day got everyone together and we headed out for a quick stop at Van Homan’s new Two by Four Location on South Street in Philly. Parking wasn’t a problem luckily and we headed in to meet the legend himself, Brian “Wiz” Wizmerski. Star of way too many video clips and a man whose past goes all the way back to the early Hippie Steve Jump For Joy days was in this day hanging with the locals and showing how much of a master wheel builder he was. Doc chatted him up a bit and everyone said hi but seeing as how Wiz was busy with customers in the shop we didn’t want
to take up too much time and said our goodbyes as we blasted out to our next stop on this Southern one day jam tour. Next up was Maple Shade Skate Park where we were hoping to get in some cool shots. Maple Shade is located right underneath a huge water tower there and was definitely looking to be a happening place to ride but unfortunately when we got there the police were already in the park kicking out a few guys who had snuck in to jam. Seems the skate parks keeper was on vacation for a couple weeks and with him gone the town does not allow people to ride the park. (yea we actually walked up to the police and asked them why the park was non operato that day) So with that disappointment under our belt, Eric offered up his home ramps for an early afternoon session. Everyone agreed and we headed to his house. Turns out Eric had been spending his off time building a plywood amusement park behind the shed at his parental units homestead. Small quarters, wall rides, spine, roller jump and the like were stuffed into a small area for full shredability. The local crew rolled in and a session began to go down on these backyard ramps. Eric definitely had the place wired and was hitting crazy transfers all over including blazing in from the street up the side opening and wallriding on the shed side. Crazy. Some cool airs, lip tricks and variations were put down by the other dudes that were hanging out there as well. By the end of the session it became apparent that everyone was getting a bit worn down so Doc headed out for a goop run, coming back with more stuff to scarf down than one could handle. As normally happens during these down times, the old guys started rolling the clock back to the good old days and the story telling time of what it was like when “we were your age” went down. So after about an hour or so of talk of “square wheels” and “ramps made out of pieces of stone”, the idea was thrown out to roll to Williamstown Skate Park for the final session of this trip. One thing there is no shortage of in South Jersey is free public skateparks! They are everywhere! We got there and Doc’s crew proceeded to rip it up along with a couple of local dudes from Ed’s Bike Shop in Vineland named Ray and Matt who also were busting out some killer moves. A good hour session there and it was looking like the day was getting a little long and everyone was starting to feel the pain of a full day of running all over the south and shredding everything they could get their hands on. It was also a bit of a letdown that one of our young bombers, Korey got broken off earlier in the day with an accident on a ramp and a broken wrist. Props to Corey, he’ll be back! Like I said it was cool to see Doc’s guys and the crew from Ed’s getting along while they were tearing the park apart. (Literally tearing it apart, the ramps could have used a new layer of ply) As Doc and I were sitting there planning the next trip and talking about the future, the idea began to formulate that it may be time to have a comp-jam down there to start to draw all the riders from the area together. Get them to meet up, see each other styles and feed off each other’s energy. With the enthusiasm that is being generated from guys like Doc, Van, and the rest it is looking like the south NJ scene is busting at the seams which means that BMXNJ will be getting a lot more familiar with the bottom end of the state. Crazy that BMX really began to come together way down there in Millville during the late 70’s and now in the 21st century it is bigger than ever. One of the first east coast concrete parks was in Vineland and some of the biggest nationals were held there as well during the ABA’s tenure in the state. I’m really looking forward to doing more exploring, sightseeing and hopefully even some riding down there in the near future. Big thanks to Doc, Eric’s Dad, Brian at Two by Four and the rest of the locals who cruised with me that afternoon. You guys are the roots of why BMX is no doubt the greatest thing going. We’ll be back. The BMXNJ Crew (well…next time we will bring the crew! LOL)