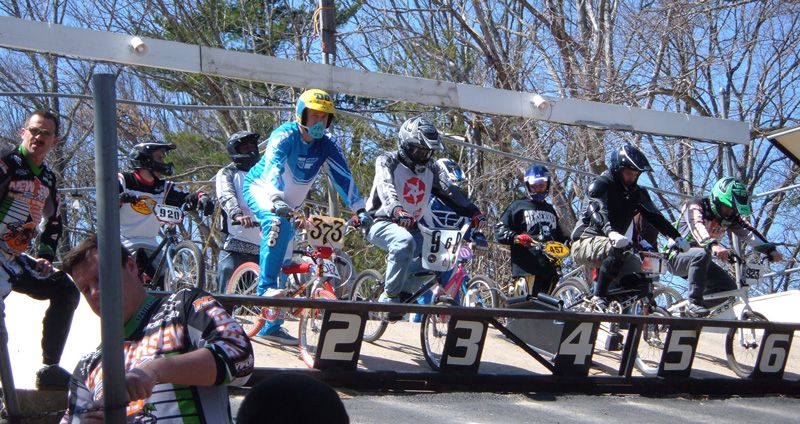 On Sunday April 5th John Malone and  I attended the Opening Day at CJBMX Howell,NJJohn is my Old School Racing Buddy from the Millville Days. John was racing in the Retro Class. Pre Mid Eighties Bikes. Nice to see the sport is recognizing the past. I was told that ” Antdog” had a lot to do with that. Way to Go Ant. I was there to check things out. Dollar Dave is getting a “Feel” for things before putting on the uniform and hitting the track. I will be racing the 46-49 Cruiser Class. (Currently accepting sponsorship offers. Have a few offers on the table right now. Being an Old School Vet Pro and being called “Dollar” naturally I will be forced to go with the highest bidder.)Things have changed since mine and Jamming Malone’s Day.  Opening Day they had a turnout of 140 participants and 40 motos. (That makes for a average starting gate of 3.5 riders.) I was told that was a good turn out and BMX Racing is on an upswing many believe because of racing making the Olympics. HERE ME LOUD AND CLEAR, Nothing would make me happier than to see a major resurgence in the sport.  Back in “our” day the surface was all dirt. Surfaces have changed to cut down on maintenance. The turns where of an  asphalt type surface and a large remaining portion of the track is sprayed with a special solution. (To cut down on maintenance.) BITD it wasn’t uncommon to slide through the turns,it was called a Power Slide, it added to the excitement for both the racers and spectators.   While checking things out I noticed at least one person standing on top of each turn with clip boards in their hands? (I said to myself,”Please God tell me this isn’t what I think this is.)  I approached the gentleman standing atop of the 1st turn and asked what he was doing? ( A nice guy.)  He told me he was a TURN MARSHALL, I said a what??? He replied again, A TURN MARSHALL. I said a turn marshal, OK? #*%!$*@!??????  After going to work all week and looking forward to racing on a Sunday I don’t want someone who has most likely never raced deciding my fate. BITD there were NO TURN MARSHALLS.
We were judged amongst our fellow competitors,parents,spectators and sponsors. There was contact, competitors elbowed each other, they leaned on each other, that was racing. BITD as long if your hand didn’t come off the handlebars and you didn’t T-Bone someone or use your feet to kick someone or someone else’s bike THIS was racing. In the 6 yrs of racing on the local, national, and the last 2 years Elite/AA Pro on a National Level I could have counted on one hand the amount of protests I had seen..That’s thousands and thousands of motos.  Are turn marshall’s really necessary? A lot of the competitors are wearing clip pedals. After thinking about this awhile, this is something the athletes have done. It shows the athletes are serious. I think that most of the competitors have thought about this and know the pros and cons of clipping In.  Some of the classes were split. BITD the motos were not split unless you had more than a full gate more than 8 entrants. (When Malone and I raced at Millville it was 12 entrants, yes we raced 12 man motos!) The excitement of racing is racing against a full gate or as close to a full gate as possible. You base the finishes cumulative and the third moto breaks a tie.Had to Get that Out of My System.It was cool to get out. I met some good people. Saw a Thruster Tri-Power that I had raced back in my “Hey Day”. I made an offer I am sure this person will get back to me!In  the Old School Class there were 4 of them. (No reason to split the motos.) It was good to see Jammin on the track. He did well 4th the 1st 2 motos, unfortunately crashed in 3rd moto, but got right up. (He’s Old School.)  In the Main got 4th.  Antdog 3rd’s throughout the day. When Jammin crashed Ant waited till John got up. I thought that was really cool.  I guess everything changes. Some changes are good and easily accepted and others are not. “ I Will Be Back!”.  Old Timers are good for the sport. We can give the new comers a better appreciation of the sport. Our knowledge and experience can steer the sport in a positive direction. As I was riding home on my air cooled V-twin manufactured in York, Pa, I thought ” I’M PROUD TO BE OLD SCHOOL”  Dech