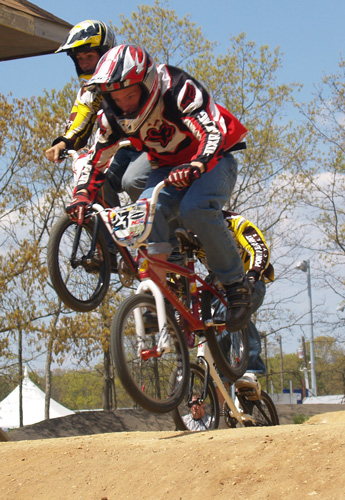 Large and in charge the riders have emerged from winter hibernation in the NJ ramp parks and converged on the BMX tracks once again for the 2007 NBL State Series. The season has been warming up with all the tracks getting the locals underway and the Jack Frost and East Coast National under their belts it was time to get to the serious task of racing the New Jersey State Series. This year the state board under the leadership of Scott Cranmer and Vinnie Mannino and in cooperation with Rich Farside and a host of other BMX aficionados has incorporated a new feature to the races with the Hyper Pro-Am Open Wheel Series. It looks like there is a lot of excitement coming back to BMX racing in NJ in the lead up to the debut of racing in the 2008 Beijing Olympics. We’ll get more heavily into the Hyper jam after a wrap up of the amateur racing.

Lots of new faces this year,returning guys and crazily enough NINE, yes NINE teams are in the running for the State Team Award this year, Point Pleasant Bicycles last year’s winner, well more like the last 10 years winner, was finally brought down by a hot up and coming team called GHP Atomlab Northeast. This team headed up by Crazy Craig Wilson came out of the berms elbowing and dropped into the top spot for the weekend. Seems like these old school guys might know something about this new school BMX thing. Second went to Felt SC Action Sports with the third going to Tuckahoe Driftwood. New sponsors, new riders, freestylers coming out to the track to race, what is the world coming to? Must be BMX unity in full effect.
Rookies? Plenty of em. Jake Bryson, you may remember his dad from the CJ DVD, took the first in 6 rookie, small but crispily fast. Young David Giordano battled the other 5 rookies to take the first for the day while dad got a free ride during his motos with one rider out to also take home a gold in the OM rookie class. 14 rookie is another class with lots of riders and it was Dan deh man Forte who got the win there with Justin Wigglesworth rocking the deuce.

Novices came out to joust on the BMX battlefield as well this weekend with some great raceatating action going on in 35+ where Antony Diciano took the win, strangely enough the Ant-Dog Anthony Brown also got the win in 35+ X but that my friends is a story best left for the forums. Ant-Dog always hunting. 10 Novice got steam rolled by Tyler Warner. Forum regulars the Hamblins and the Hatems also got down to business, well their kids did with Kyle Hamblin dusting 7 novice and Gabriel Hatem, loving taking the sails out of the 6 novice class. The novice guys are really turning it up this year and I will not be passing out unexpectedly if we start seeing even more kick azz experts coming out of those classes this year.

Ladies, ladies, too fast for this old guy nowadays, LOL. One half of the Godino sisters was blazing on the track this weekend, Haley. We’re looking forward to the return of Cheyenne back on the track soon. Neva the BMX deva took the win in 8 girls. The Weimar sisters were rolling up in their classes in between watching their bro Steve rock the Pro-Am open. We need more ladies in BMX, word in the stands was that Elite Woman main maker Carley Young was in the stands under the PBR tent.

Quick cruiser run-down. Farside lost..his Hyper jersey to ride for Team PBR during the class motos. First for the day though. Whiley co-BMXracer took 35-39 cruiser. Vliet stomped on 30-34. Schneider and Behm went 1-2 in 13-14 cruiser. Not sure why they call them cruisers, they sure look like they are moving fast. Another bad joke, yea, I’m getting old..got old..maybe it’s time to talk about.

The experts. Plenty of older experts this race as everyone who raced the open was forced to race in their respective class as per nbl rules. (sorry guys, contact the nbl and give them a piece of your mind) Kyle Biller was SKYING and sailed in for the win in 16X. The only non open class to have a main this race was 17-24 X and that saw Matt Kelty roll in from the tax free state to take the win. Jimmy Moore-air slid in for second with Massive James Mulhern hitting up the third. Should be noted that Scott Willitts returned to racing this weekend. Rock on fellers. Track director Chris Vliet also showed the 30-34 X class the fastest way to the finish line with the other Willitts dropping in for 2.

Guess that leaves one class left. Pro-Am Open. The state used part of the Carolan Foundation grant and got THE kicking PA system for the series this year, by the time the Open came around everyone was used to being able to hear their names and know what was going on. Dave the Rave Super Cave was on the mic and got the crowd going all day long but when it was time to get the Pro-Am on the line, the music was cranked and fans took attention as the big guys got on the gate. With AC-DC, Cake and too many other killah tunes pumping before each moto we were sure to see some wild BMX action from these guys this weekend. In the motos it was anybodies race. Kelty was killing it, but Knapper came in for a win one time. Moore was in the hunt just keeping his eye on the main. Brett Snyder slid out into the semi but would not see the main. Tantum the manual master kept his wheels together enough to roll out to the final event. Steve Weimar, when not almost rolling backwards off the gate slingshotting, (he’s almost as crazy as certified slingshotter T Sullivan) blasted forward enough to find his way to the finals. Even the old dog of the 80’s, Rich Farside managed to take some oxygen before each moto and squeak into the big boy final.

The main was stacked like Pamela Anderson after her second breast augmentation. Brett Snyder, Dave Pawloski, Tom Ballard, Whipple, Sullivan, Greg Custer, Tim Cummings and Jim Mulhern. Yea man, those guys are kickazz, but they were all watching from the stands as Delizia, Moore, Kelty, Knapper, Tantum, Farside, Weimar, and Dawejko rolled up to the gate to the sounds of Cake’s The Distance. It was time to put up or shut down. Cave does the roll out, the crowd goes silent and snap boom, it’s Phil The D Delizia snapping out and spinning with Kelty right next to him. The drag race to the first turn was nuts with enough elbows and dicing to make the guys at the WWF jealous. Out of turn 1 and it was Fast Phil with the lead and Kelty on him like snot on a little kids finger. BIG air over the gnarly EHT doubles and it was a stunt fest for the fastest and ballsiest racers in the area. (Check newjerseybmx.com for the vid) Some bumping and rubbing going on and Rich Farside somehow managed to squeak his bones into the third place position over Jeff “the ladies find me tantalizing” Tantum. Everyone was wondering if the creaking of Rich’s bones going into the second turn distracted the young guns from being able to hold off the Hyper attack from a top 3 position. When it was all over but the buzzing of cassette backwheels the final order was Delizia for MCS in the 1st, Matt Kelty for Felt in 2nd, Rich Farside, Hyper man 3rd, Jeff Tantum 4th, Jeremy Knapper 5th, Steve Weimar 6th, Stosh “the mosh”  Dawejko 7th, and Jimmy Moore wondering how he could look so could but still get eighth in the main. Also gotta mention that Phil D stole the holeshot award as well.

Killer event well done by everyone. Chris Vliet besides racing 2 classes, also was running around doing the track director thing all day, this in between having his house repaired after an accidental fire has him living in other premises for the next 6 months. Props to grace under pressure for Chris. All the volunteers out there who do their thing for nothing but the award of helping out BMXers deserve their own toot on the smoking job well done horn as well. The NBL State Series moves over to Trilogy Park BMX in Pottstown for it’s next stop and it looks like the action will get a little more smoking over there as the riders return for rounds 2 and 3 and the Hyper Pro-Am series makes it second showing in the State Series. Ride on ya BMX sickos. 😉