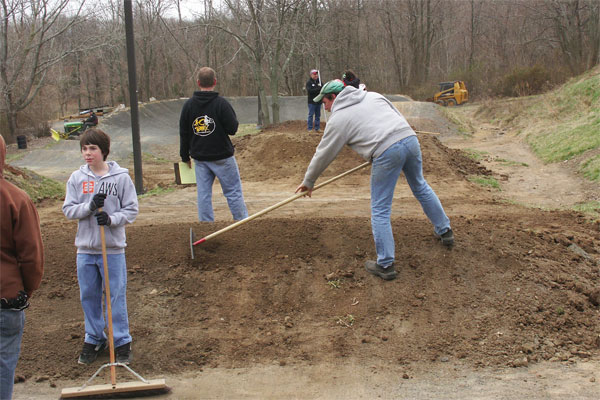 Got the invite from Bill Hayden to get my buttocks up to HC for the first time in a long time to watch Jason Richardson’s Transit 5 Interview and take a first look at the new changes at HC, Bill was also mumbling something about bringing body armor or something but I had to leave that stuff at home this trip…

Matt and Bill had a bunch of the local riders tossing the dirt from one end to the other, rakes were flying and Kevin Mattis was the Bobcat ace from the land of oz, let’s just say backflips were almost attempted with that thing, hehe.

Who showed? Too many to to list, Loren Hamblin, the Fillipones, your Hunterdon Host Matt Danek, Jay Staudt and every BMX rider within 30 miles of Flemington NJ. Check the pics! Jimmy F was giving me some insight into a little dream of his to see a sort of bowling alley sized place to put a practice gate start facility with maybe a jump or two to toss it up. Sounds almost like a good idea for Olympic training…

Back to the track! The first straight was getting a facelift on the doubles, a new roller and doubles were on tap for the third straight, and the third straight triples were being redone into a nice set of smooth doubles. Bill is an ex-track builder for the ABA, and has the ability to get the job done, but was getting sidetracked by my motormouth. The kids were doing a great job of getting things done there and should get a medal just for trudging up and down that freakin’ hill!

About the track, yea, yea, I know, I was teppid about that dust but after stepping up and driving up, I gotta say it looks fine, the reality of the situation is that the track is a downhill (more on that later) at the bottom of a hill and without something to keep things together, the track would be real difficult to take care of. Downhill, EHT and CJ are flatout power, get it on, tracks…HC is a downhill….from the starting gate to the finish you have a FOURTY FOOT DROP in elevation, what does that mean? You could basically roll out of the gate and pump the track and be FLYING at the bottom of the hill without taking a pedal, ‘course that isn’t gonna win a race, but it is a new experience for those who have never hit a downhill track.

Warp out, I mean wrap up… Bill and Matt were great, receptive and down with the cause, thanks for letting me come out and basically just B.S. for an hour or so and get the pics. I look forward to heading back up there for the State Qualifiers and getting the scoop on all the poop. Back in the day, the words road trip were all about racing, so all you guys who are looking to head out and have some BMXin’ life fun, pack up, camp out, rock out, up to HC and get your downhill on!