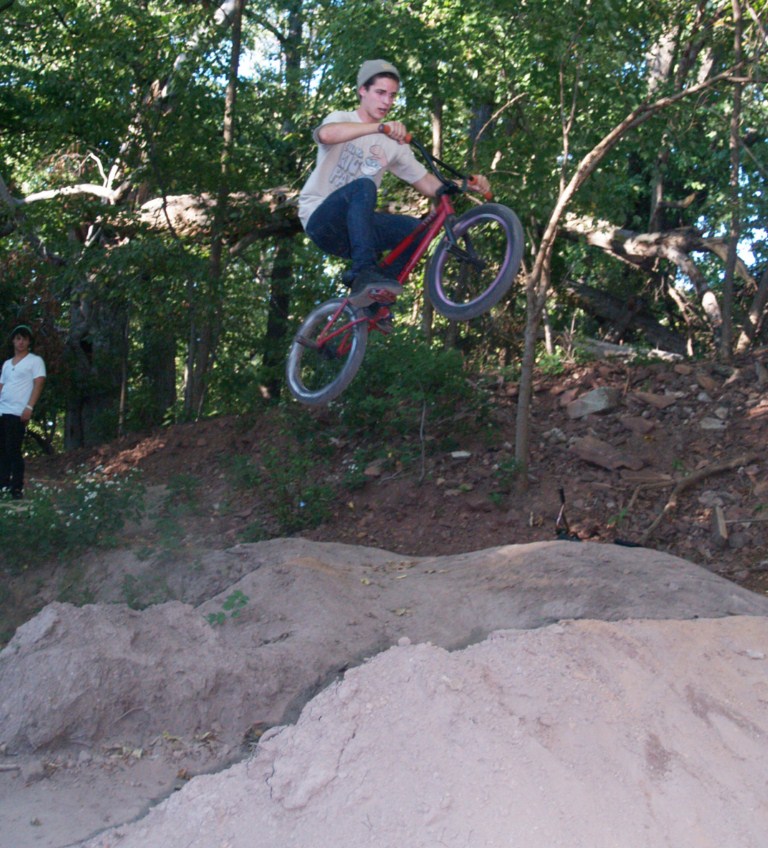 Whilst (whilst? who the hell uses words like whilst when talking about BMX?…dude what are you in your 40’s?…) chilling at the JPR Am Jam last weekend, I was stoked to see Mike Brasile hanging at the comp. I had met Mike through Dave Pawson over the summer at Jump For Joy 16 where the gents put down an invite for me that said anytime I was in the area I was invited to check out Clifton’s Dam Trails. Now as everyone knows, well everyone who knows BMX, knows that invites to trails are a special thang because that means the peeps who run them trust you to not disclose the location to non-locals who might bring…shall we say “undesirable” elements to the trails. (Like rowdy people, trash throwers…police….township officials who haven’t yet embraced the BMX love, etc.)

As the comp wound down Mike asked me if I wanted to head over with some of the other locals to check out the jumps and maybe see if I could get a couple decent shots. The comp was winding up a little early so I had some extra time before the trip back to BMXNJ HQ. I accepted the very cool invite and followed 2 car loads of BMXers from the jam over to the trails, located not too far from JPR. For those of you who would like to check them out yourselves, it’s real easy to get to you just get on the ****** and get off at exit ******* then make a left and head ***** on ****** till you get to exit ****** make a ****** and then go down about ******* make another ****** go about ***** and then hook a quick *****, the trail to the trails is located right behind *****. Ez-Pz. (seriously if you want to check out the trails, friend Michael Brasil on Facebook and be nice and respectful to the dude and you maybe get your own buttocks an invite out there…thats the ruuuulllleeee of the trail riders fellas and fellettes.)

Mark, Craig, Matt and Joe along with a few other guys headed over to rip it up. A few of the guys hadn’t really ridden trails before but adapted pretty quick to the scene.

Mike started the trails about a year ago after wandering into the area and saying, “yea…this’ll work”. There is a nearby water supply to keep dust down stocked with bass and crystal clear h20. Mike keeps the place super clean with garbage cans and trash pick-up the rule of the day. He also seems to be an amateur archeologist with a multitude of crazy object either hanging or on display from the digging adventures while making the spot. The area itself is pretty different for a set of trails. Rather than have the constant doubles, doubles, doubles of most sets. This place is situated not to far from a river, which puts it on sort of a river bank so it snakes down and around with hips and crossovers. It’s pretty creative and over time will be seeing some chill lines come together.

The guys who came out did not leave disappointed as a few quick train sessions went down and a good time as well as a few laughs were had by all. A couple guys though did leave with more than they came but that was only in the form of clay embedded in their riding attire after some core riding had them pushing the limits and push the dirt around.

Mike is good guy who is full on into BMX at the tender age of 38 years young. More dudes like him are needed out there to bring the BMX back to its roots and it isn’t more roots than Dam. BMX started with kids in the woods emulating MX riders busting out and here 40+ years on, a good session in the woods with some mellow trails and good friends puts it all in perspective. Working for Grove Street bikes now doing promotions can only mean that more people will get to experience the fun times at Dam and get more peeps involved in the best thing going…

After a good hour session there, everyone packed up and decided to roll out and head their separate ways. Even though we were heading out, we all knew we’d be back because nothing can ever keep you from those… Dam Trails.

As a final word, Mike is always looking for people to help him build down there, so if you are into trails or wanna get into trails, hit him up. FB- Michael Brasile. Tell him, BMXNJ and Brittles sent ya.

Now go down to your local park or in your backyad and dig a Dam set of jumps…will ya?! We’ll also have some stuff in the next issue of …BMXNJ Magazine.