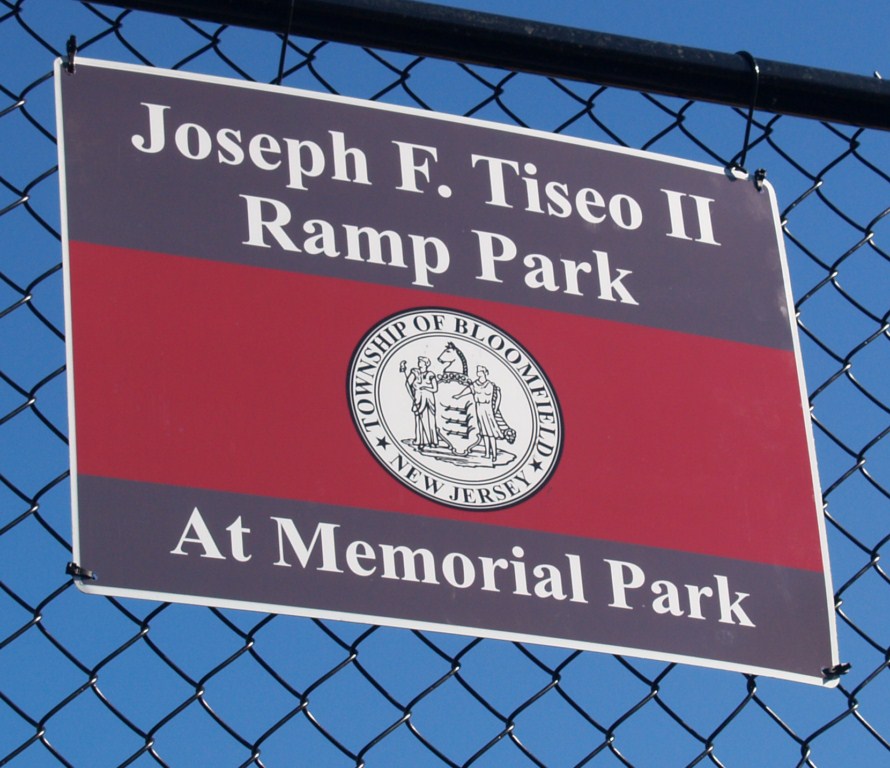 Before you read any of my words, (which will in retrospect seem very hollow as I did not know this young man much farther than remembering him from the early days of Hippie Steve and the new young crop of great riders coming up), if anyone who is visiting the site could take a look at http://kanigie.com/jerseyriding/tiseo.html to see a truly fitting online memorial to a highly respected rider who’s career was cut short way ahead of it’s time. Al Dimino also has a nice writeup at this site, check it out here: BMXINVASION.com

About 3 weeks ago, bmxlegend posted on the site about the opening of the long awaited Joe Tiseo Skatepark in Bloomfield, NJ. I remembered Joe’s name as one of the young dudes back years ago who was busting onto the scene and making big waves in BMX from the NJ area. When I returned to the scene a few years ago, I had learned that he had become an icon in NJ  and passed away tragically in 2001. His name had become, legend. As I talked to the guys who  had stayed on in the scene, like Steve Wisbeski, Rodney Morweiser, Adam Guild, Mike Wilson, it became apparent that this guy was not just your typical BMX rider but one of the special breed of BMXers who push the sport in new directions  not only trickwise, but in perception of the mainstream public by having an incredible enthusiasm for BMX and it’s riders. Helping others and motivating his brothers in arms, other BMXers, was part of it, but he also had a vision. And that vision was a park for BMXers and skaters in his hometown of Bloomfield. Joe left the scene on September 2nd 2001. Not many people when they leave this earth, leave behind such a legacy that others would pick up the torch and finish the job they started.

For Joe Tiseo a man with such good will towards BMX, the fire that he started to build that skatepark finally came to fruition on November 22nd 2008 at 10:00 am with the opening of The Joe Tiseo II Memorial Ramp Park. When the first BMX history book is written it will show this date as the first time that a Ramp Park was named for a fallen BMX rider. I can say it was a truly moving experience for me who has been around BMX since 1978 to see something great like this happen. Joe’s positive legacy is a great example of what we should all be striving for.

My personal story for the day… My friend and fellow webmaster, Bill Hayden, was good enough to guide me into the newly minted park from the Garden State Parkway, it took a while and quite possibly a bit of frostbite on Bill’s extremities but I got there to see a packed house in the arctic temperatures of that late November morning. Bill headed out leaving me to my own devices to wander about and take in this piece of BMX history now permeating my senses. The ceremonies had wound down and there were a bunch of guys outside the park doing some flatland. YES! Flatland, at least 15-20 BMX freestylers were hanging there doing their thing and having a good time. It was really cool to see a group of flatlanders ripping across the tennis court in front of the ramp park. I wandered over to the fence and saw newlywed, John Dicaprio, the coverboy of the first issue of BMXNJ szine, hanging out and paying his respects to Joe. It was great to see John again as he was one of the first “new school” riders I had hung with on my way back to the freestyle scene. John had been there since the morning and was heading off, so I went over to the park and saw Rich Dimino out there lensing the camera. Awesome, someone I know who is another great supporter of the BMX scene in PA and NJ is in the house. I also see Al right up there on one of the small quarters, chilling out and we get a chance to exchange pleasantries again before they too had to head out. Turns out Al had shown up and given Ralph a hand putting down a little demo for the crowd at the opening of the park. I then started to wander around and just take in the scenery. I shot some pics of the flatland guys, (the ramp park at that time was only allowing a skate session, the BMX one had just ended) who were doing a cool mix of rolling stuff and street inspired bunnyhop moves. Then headed back over to really take in the fact that this park was named for a BMX rider. So impressive. It wasn’t long after that, when Rodney stepped on the pavement wearing his trademark long shorts and big smile. He was there with another one of the NJ originals in the freestyle scene, Mike Wilson. We said our
respective, yo what up’s, and it started to become a little bit of a rap session with Ralph from Animal, Mike and all of us older BMX guys about all things good and BMX. Ralph, Mike and Rod are actually right in the middle of opening a new shop near the Jersey City water front, called Grove Street Cycles. From the hints they were dropping this place will turn out to be THE destination for the future of bike riding in many varied forms in NJ for the future.

After freezing well into the early afternoon, we all rolled out to Applebees and sat down to b.s. about BMX, ’cause that’s what us old guys do sometimes…ok, quite often. It was really great to sit there and shoot the sheeot about all the great stories of BMX that we had experienced and even better, what plans we had cooking in our minds for the future. These men who had grown up around the lifestyle of BMX were such creative free thinkers that it felt as though there was no limit to what the future could be for BMX. From the early days of the Jersey City Armory races to Rodney’s Pro Flatland win it was nothing but good times. A few hours passed by that felt more like moments and Ralph’s phone started ringing. It was Joe’s mom, saying the BMX session had started back up and he needed to get back over there pronto! …Mister. Ok, that is an embellishment but it was time to roll and we headed back to the ramp park. The lights were on, (yep, this place had lights!) and the place was jammed pack full of young BMXers having a good time. Mike and Rod wandered over to Joe’s mom and I was introduced to the woman who brought such a great BMX presence into this world. Her stories of Joe were touching as we could all relate to his go for it attitude she spoke of and his great love for BMX and it’s riders. Ralph was out doing Joe proud by shredding the course and showing them youngun’s that no matter the age, you can always BMX.

By then the temperature had dropped pretty low, we were all shivering out there, and the park was  closing at 6 anyhow, so we said our goodbyes and headed off into the sunset once again.

This time though, things felt different. It was like BMX had reached a turning point. It was now a sport where when one of it’s great participants passes away, they would be recognized for their contribution. They would be revered and remembered not only by the riders but also by the community in which they rode. There would now be a legacy to look back on and to pass forward to new generations.

R.I.P Joe Tiseo, though you are gone, your legacy will live on forever in the history of BMX.

(aside)Who are all the riders shredding in those pics? Just the regular everyday kids on BMX bikes. The kind of people that Joe would want to see hitting up a park with his name on it.