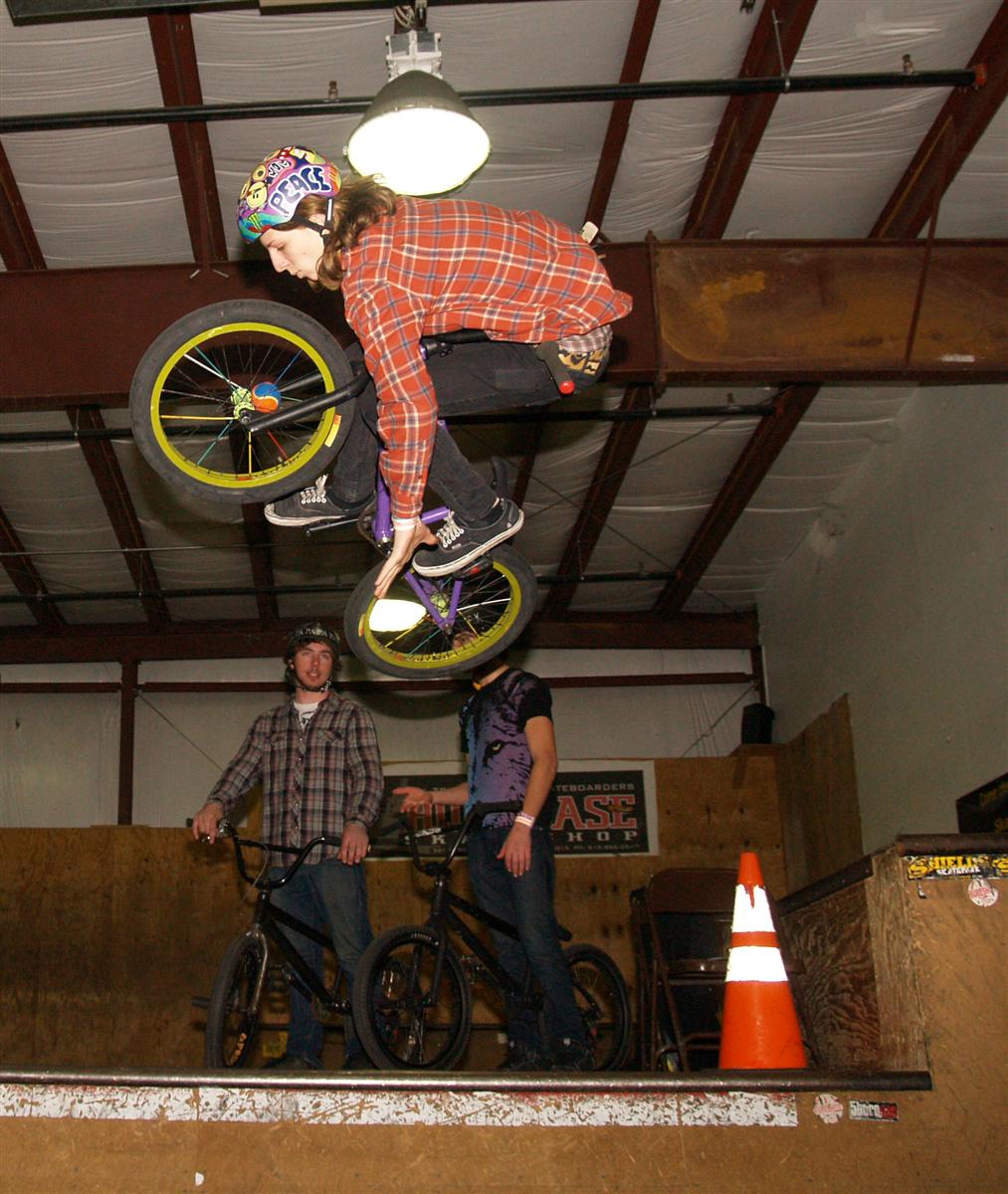 That which does not kill me, makes me stronger. Big props to John Brunguard of CJS, who went down hard this weekend in the Expert class and had to take ‘the ride” to get worked on. He’ll be out for awhile but will be back, the season is young. Should also mention that the Shields crew did a great job of handling the situation and should be commended for how professional everyone was! See ya back on the ramps soon brutha!

(All comp pictures on right here. 145 shots) Paul Shields was out of town for this jam so it was left up to the able crew of judges and staff spearheaded by Aaron Graff and Jacqui with sponsor help from Animal, CJS, Efinger, Odyssey, Monster Energy Drink, Kennette Productions, Grove Street Bicycles and System Cycle. Practice was well underway by the time I arrived at the comp and things were rolling smooth as usual. New to the jam arena were the green and white shirts of the Grove Street Cycles crew. Word from Mod Rod was that the shop could be seeing the opening bell being sounded sometime in March. With the incredible history Jersey City has in the NJ BMX world, it looks like more crazy times are ahead for the land of the Jersey City Armory. Other crews in the house were Efingersand their ace photog Rick who was banging out the killer shots. CJS was also in the house with some of their crew, as well as a full on contingent from the land with tons of PA BMX history, Levittown! Crazy to see kids that probably weren’t even born when Charlie Huber was running the AFA, now making the trek to Flemington to compete up here. DocJr from the site was up there, he brought a bunch of young dudes and dudettes to see the comp. The guy even started a group in his town called Team Tear It Up, to promote BMX in his area. Doc also sits on his towns council…so BMX is looking good for the area.

So after saying hi to Jaqcui, and Aaron, giving the hey yo to Rick, it was time to get the partay started. Aaron got the beginners out on the course, the judges got in place, the music was cranked up and the beginners took on the Shields course.Lot of new faces in the “just starting out” class and they were hooking it up on the course. 4th place in the class but winner of beginner best trick was Tiahn Jones. He was rocking some killer grinds and good airs on the ramps. 3rd went to “flyin” Ryan Nivanto. Ryan busted out the transfers and some great 180 stuff on the grind boxes that had the rest of the class, saying, “I gotta learn that for the next comp”. Eric Stump snuck in for the 2nd. Stumping the judges on how a beginner could be so good, (yea, ok, that was a lame analogy…) he tore it up out there with street inspired moves galore that left all the rails in the place stressing over his return. The Garrett Reynolds street inspired style is fully in effect out there in BMX freestyle land. First place went to a guy who had everyone asking the question, “How can such a little dude, live so large?”, Jameson Woodell. Jammin’ J was all over the course like it was a race and had more energy than that bunny you see on tv with the drums. The crowd was on it’s feet every time Jameson took over and it showed with him taking home the lions share of the winning swag. Next comp at Shield’s is an all beginner comp with age classes, so we’re hoping to see a bunch of new guys coming out to shred in the multiple classes.

In between the beginner and the intermediate class, Aaron set up a little impromptu distance jumping contest off a wedge ramp on the floor and let the guys go at it. I’ll tell you what I’ve never seen a bunch of guys get such HUGE air off such a little ramp. Then when that was done it was farthest 180 time. There’s a couple shots here from that, definitely a cool idea from the organizers of the comp. Good times all around and BIG air.

Intermediates are really starting to go off the hook. These guys are stepping up their game comp after comp and it is really showing. Only one dude in the intermediate class was able to air off the mondo wall ride in the back and that man was Alex Bodnar. I’m not sure which trick he busted out to win, but he did walk away with a fat smile and the swag plus prizes for intermediate best trick. 3rd place went home with Chris Koval riding for Grove Street. Kid Koval is a staple at the Shield’s comps and always kicks out the jams. He’s got the jump variations down and gets plenty of air on the quarters as well. 2nd got scarfed by Ed Hemison. Ed’s got the most chillin’ helmet out there with peace signs all over that mug. The man also stretches no handers and can-cans like he’s an old school gumby figure. (google it kids) Mikey Almodovar strolled home with the win this time for Nation BMX. Mikey was kicking out lookbacks left and right, sliding on the rails like a greased up deaf guy banging out lip tricks and basically tore the place up. Look for this young dude to tear it up in the expert class in the years to come.By the time the expert-advanced class rolled around the place was going crazy, well…it was at the very least going. Practice ensued and as usual it was total chaos. These guys go big whether the contest is going on or they are just having a friendly session. Dean Watson from the Efingers boys was doing his usual wild thang. He was also one of the guys busting those monster 180’s during the jump contest. The other Efinger maniac Eric Marion was also all over the course doing his brakeless street craziness. Mike Seawright was also in attendance for CJS and was stomping out the tailwhips and barspins for the Shields crowd. All the talent in the expert class is just crazy great. The first heat of expert class was really going off killer when during the last groups run John Brunguard went for a tailwhip transfer on the front quarter and got hung up. He went down on his leg pretty hard and had to unfortunately be taken out of the park. While he was being taken out though, he tossed out the two big thumbs up to the crowd, who broke out with massive applause for the hardcore shredder. He’ll be back.

After the time out, the expert class started back up again and the guys finished up doling out the lunacy. 3rd place went to Eric Marion wielding his black and green BMX machine. Eric’s FAT transfer from the corner of the long quarter to the box in the front of the park was out of control. The guy is smooth as
well ground peanut butter ta boot. Second went to Brandon Jones. Brandon’s bike is so white, the photographers were having a hard time getting their white balance adjusted correctly, well that and his outrageous double whip transfers that make you not want to take a picture and instead just enjoy them in all their glory. Brandon was also the only dude in the park pulling decade jumps. When he dropped that trick biscuit out there the whole place erupted in hell yea’s! Big winner for the day was Kevin Vaunauker. Kev Dog came all the way from the second most historic town in PA, Levittown, to bring home a fat first to the town that hosted the early PA AFA freestyle comps. It was really a great feeling to hear Aaron announce that a whole contingent was there from Levittown. A great place back in the 80’s for freestyle and it looks like the tradition continues till today. Kevin was doing 3 whips and was also coming dang close to pulling the whip 360 to rollback at the end of his run. PA is in the house once again. Best trick for the day in expert? The main man Mike Groff, kept ice picking the back sub until he nailed the incredibly tech, icepick to tailwhip. While everyone else was running all over the park, Mike stayed steady in the back to pull that banger off. Mike was also very close to taking out the lights on his airs on the back quarter pipes. The lad is a BMX rocka. Cool thing about the final runs was Aaron and Crazy Bill, the old man crew running substitute for John. Though it took two old guys to make up for J.B. it was still cool to see these guys come out and dedicate a double run to a fallen BMXing comrade. Aaron goes way big for a middle aged BMXah and Crazy Bill..well at 46 I think he is the only “nearing 50” BMX rider in the state hitting that trick.

By the time the expert awards were handed out, it was getting late and time to roll out. I said my goodbyes to the BMX brothers and headed off back to the NJ shore. Next Shields comp is May 17th. Aaron has told me it will be an all beginner comp with age group divisions. So if you know or are a guy or gal who has never ridden in a BMX freestyle comp before, come on out to Shields and have a good time. BMXNJ will keep ya updated on the next comp.

See ya out there BMXasizing,