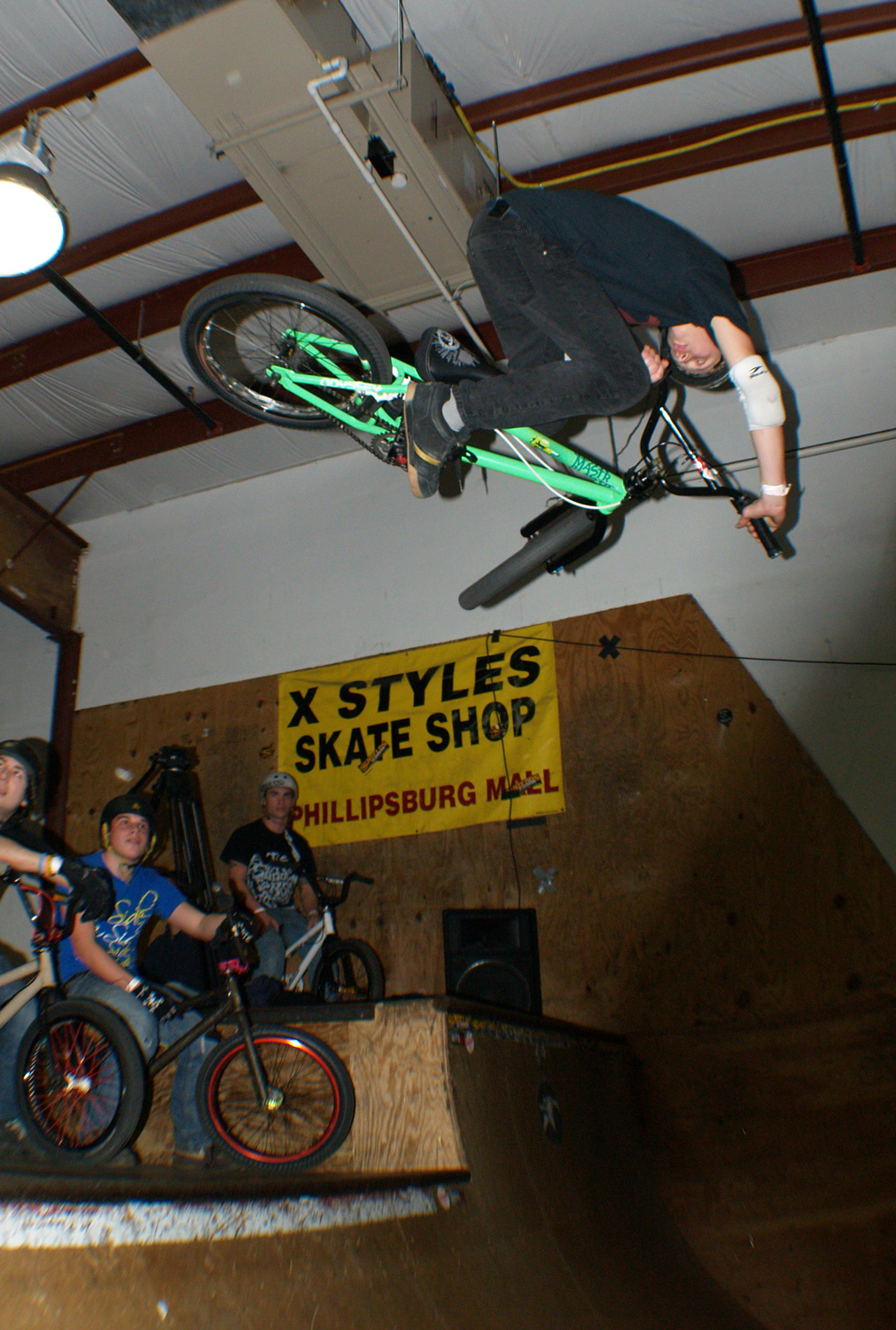 The Shields Skatepark crew put it all together for another rocking mid winter comp this past weekend sponsored by the usual insane crews of Animal, High Gear Cyclery, Efingers Sporting Goods, and CJS BMX and Skate Shop. The shop reps were sporting the BMX pits that day with Al, Rod, Crazy Bill and Aaron the madman BMXer-announcer once again driving the one guys nuts with his musical selections. And yes, even the old dog of freestyle BMX himself, Hippie Steve was in deh house nursing a 3rd degree seperation of his shoulder from a flip gone wrong at Woodward Camp a few weeks ago. brokenspokes arrived just as the beginner class was winding down to witness one of the racers come out of the
woodwork to stomp down a solid 3rd place. None other than Chris Koval rocked out hard enough for the 3rd spot some cool swag and a bitchin (hello dating myself as an 80’s nerd) trophy. Guess there is some validity to that whole “all aspects of BMX help each other” thang. Props to CK. Alex Bodner and Ian Bradley locked down 1 and 2 in the beginnah class in that order, no mean feat either as there were 20 kids in the class. Best Trick for beginner was Mark Vinch. I finally

started taking some halfway decent shots around the time the Intermediate class got running and these guys stepped it up a notch. Lots of no
handers, whips, 3 six o’s and all kind of rail sliding going on. Eric Marion was looking crazy going for a huge 180 wall slap off the jump box. All the intermediate dudes were kicking big airs off the 5 and 6′ quarters. Sean Ricaney rocked the 1st and Steven Van Niel got the 3rd. Best Trick was ripped up by Justin Bente. The last class to get its gears on was the Advanced class and they were off the fushizzlin’ hook. In practice alone Rob Deveeux was throwing out front flip
attempts WAY over the box. In fact Rob had some really out of control bomb droppers in the runs as well. Several attempts at a bike flip air were thrown out on the 6′ quarter. Also thrown down in the Advanced class were a peg stall all the way up on the back sub box. With one attempt leaving the crowd gasping as the stunt master’s leg slipped in between the back of the ramp and the wall and tweaking in a weird way. The main man did bounce back up and rock the trick in the end though! Eddy Hernandez busted out some big airs, killer lip tricks and sick jump box variations to take second and Dapper Dan Diehl locked down first with
back flip flyouts, crazy grinds, many spine tricks and killer 3 6 0’s. Best trick in Advanced went to Chris Assensza for an opposite tooth pick grind down the big stairs rail. Special propers have to go out to the BMXah who made several attempts to clear the whole 18′ of the wedge to wall ride in the front of the park. Coming within about 3 inches of making it each time, wild stuff considering the opposite end had a nice drop off where if you didn’t land it just right you’d be ripping up a nice flip over the bars. My personal fave trick was the fufanus on the hip back into the mini-ramp (pick to the right) a gap of about 8′ to pull back into. Next Shields comp is March 2nd 2008, everyone should roll out and have a good time chilling at the top ramp park in Central NJ. Say yo to Pat and Jaqui when you get there. Here’s all the pics I have from the comp that are good enough for the web Shield’s Comp Pics the rest will be in NJ BMX Szine issue 11 due out the first week in March. (Next Shields Comp)

Peace out, the brokenspokes.net staff!