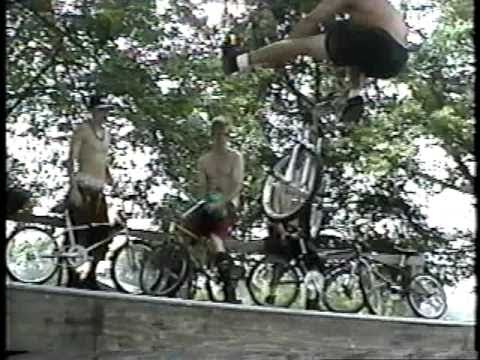 Legendary in their time, the ECD guys were notorious for severally shredding at comps and jams throughout the North East during the early and mid 90’s. The footage you are about to see is from 1993 but incorporated in a 1995 video. You see by 1995 Jeff Crawn had a…pretty bad accident at Hoffman Estates in Chicago, leaving him paralyzed. The accident, I would like to add, was of no fault of his own but instead was tragically due to equipment failure, his forks broke at the head tube. When word broke of the accident I was hit pretty hard. Jeff WAS the Ramp-Ateria (my park) and was gaining a lot of notoriety for being a total bad ass. Sadly his career was cut short. This man is truly, a New Jersey BMX Freestyle Legend. Watch this video and realize this man rode Flatland, Ramps, Street and Park…and Dirt Jumps. He DECIMATED everything…maybe that’s a lesson we can put out there for today’s riders. Ride everything you can man, have fun, you never know what the future brings. Ride on Jeff.