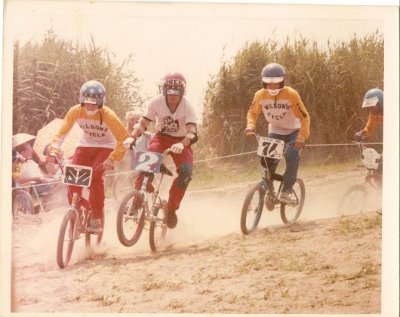 One of the great things that I personally have gotten out of running this site the past few years is meeting people who actually were around at the dawn of BMX in New Jersey all the way back to the earliest days. One of those guys is John Malone, he has a whole photo gallery of pictures from the earliest days of BMX in the state on the site and he might even have some other treasured stuff coming out later on, like a DVD of racing in NJ from 1976. Amazing. I finally got the chance to stop and send out some questions to a guy who I’m sure to him is “just another guy who raced BMX”, but to me is another one of the living legends in the state. Here’s one of the first guys to make the trek down to Millville and ride BMX, Jamming69, John Malone.

Where did you first hear about BMX?
I was riding with a couple of buddies past a local bike shop, Amber Cycle on Cedar Lane in Teaneck NJ. When a hand drawn ad in the window caught my eye. It basically stated that if you like to race your bikes in the dirt and do jumps and tricks to show up at a wooded area that we all knew as “Windsor Road woods” on a certain date and time. And the thing that really caught me was the little BMX bike drawing, where the bike popping a wheelie. Don’t know why, but I liked it.
And of course the person who posted the ad was Charlie Litsky.
What was the first kind of bike you used to race BMX?
The very first bike I raced was a converted Schwinn Stingray. A local guy that I knew through Motocross racing was taking Schwinn frames and chopping the backs off them. He then welded and replaced the back halves with a swing arm and a set on small mini bike shocks. I thought this was so cool, this was pre any bike on the market that had shocks, as far as we knew. This bike was soon replaced with my first purchased BMX bike, a Webco Mono-shock, which you can see in my pictures. I loved that bike, it also had the first version of Tuff Wheels, a very sweet ride.
What did you guys do to occupy the time on the trips to Millville from North NJ?
Well this was long before any video games or portable DVD players. So we did what most kids did when piled into a car and stuck on long drives, we just talked about anything and everything. And of course we did spend a good amount of time picking on each other, but it was all fun. Then there was times you would actually see other cars with bikes hanging on the back and you would make ‘gestures’ and yell things back and forth, that was before a parent yelled at you to stop.

Who were the biggest competitors back then?
Personally for me it was Sal Zuener. Charlie and Wayne were older then us so in the beginning I wasn’t racing against them.
Even though when the time came to race them, they still were not much competition…LOL…Sorry Charlie and Wayne.
Of course after the first couple of years and more tracks started to pop up, every track had their ‘local’ star racer, but still the one person who haunted me for basically my entire racing time was Sal.
To me hands down, NJ BMX BITD was Sal Zeuner.
What was NJ’s first track like?
Ah, Millville was great. Here you were down in South Jersey in the middle of nowhere on some dirt road when you would make a turn
into the this wooded area that soon opened up onto the race track. As soon as I saw the track and the  flag pole with the American flag
blowing in the wind I got a rush thinking about racing around it. And there was this great smell in the air, they use to use oil in the dirt
to keep everything packed down. Mr. Elliot and the parents who helped him out, kept the track so nicely groomed, there wasn’t a rut or rocks or any obstacles on that track. I know that the used a four wheeler with this metal type of grating device dragged behind the four wheeler that they ran over every inch of the track. The track was sweet, there was just this look and feel that when you first got there you got all excited about what the day was going to be like. For as long as the 3 hour trip was, you couldn’t wait to get there, and you didn’t want to leave.

What was your first impression of a real BMX race?
It was great, I couldn’t believe we hadn’t done this before. I loved it, the rush was unbelievable. Here we were just a bunch of kids, but we
felt like we were part of something big, something important. And having a blast doing it, what more could you want?

I’d like to thank John for taking the time out of his schedule to put down these memories for posterity. Bringing the past and present together while dreaming of the future is what I hope this site and the stuff we all do here does. It’s been an amazing year for me seeing the guys who basically started the sport of BMX in this state take an interest in this little website. My helmets off to all the people who began this crazy thing called BMX in NJ 32 years ago.