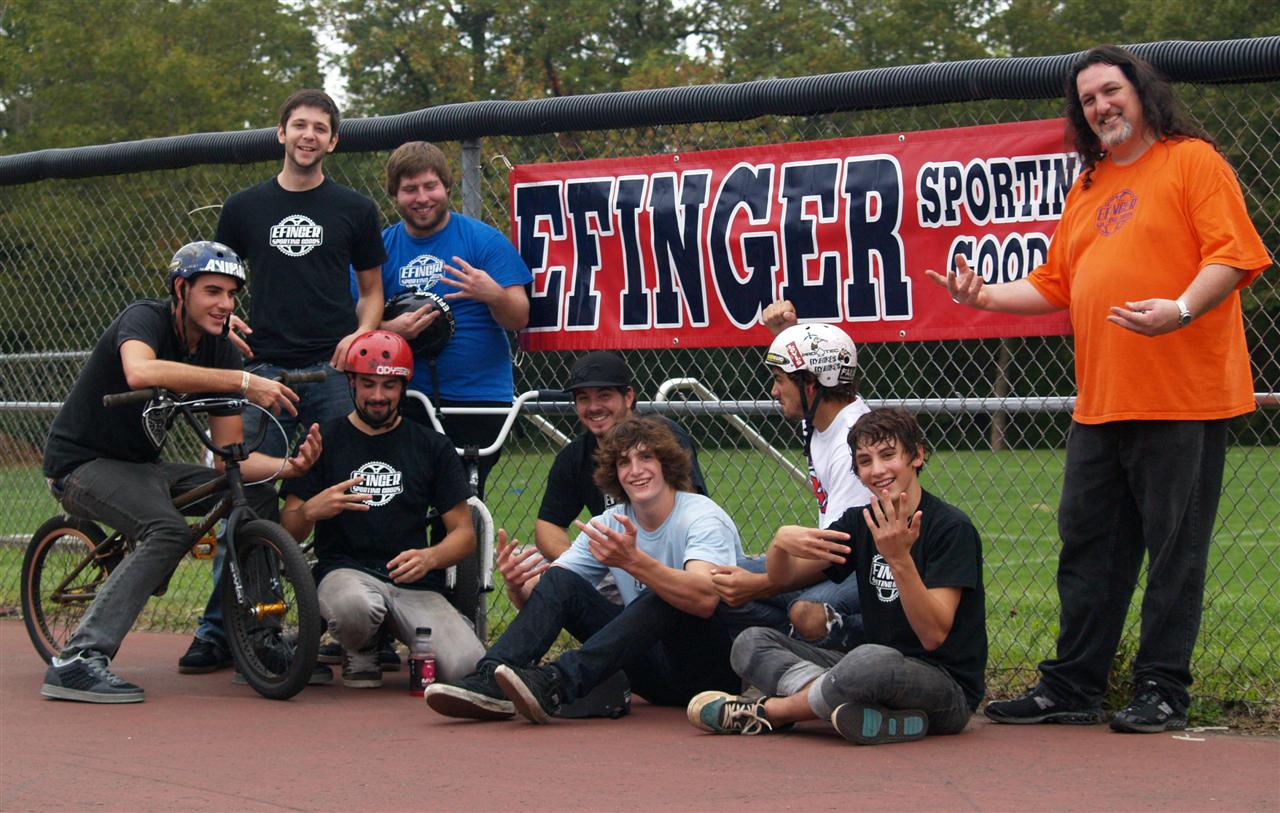 Sponsored by Efinger’s Sporting Goods and Ken Cornell Wheel Park
with support from Primo, HARO, Diamond Back, Animal and S&M

“Bill, It’s Brett man, I got rain down here, are you still going for it?” Bill: “Dude, we’re freestylers man, going for it is what we do”

10:45, I kiss Christine goodbye for the day and load up the BMXNJ crew (me and Dierdre) into the Woody (stop laughing…) and head up the parkway.

The rain holds off the whole way up and practice is well underway when we arrive there. Luckily it was extended that morning due to the weather and to get as many sign ups as possible for the event. We do the hello rounds and notice quite a few of NJ BMX’s local celebs are in the house, Hippy Steve from Jump for Joy is judging, Rodney Morweiser from High Gear now of Grove St Bikes is in the house judging, Ken Cornell, the man behind the park is wandering about making sure the rain stays away, Mark C, manager of Efingers BMX team and department is in full effection doing the sponsorship thing, even some racer types showed up to hang, the Lapusnaks, designer of the 2007 CJBMX logo were there, one of the stars of the Hyper Pro Am, Vinnie Mannino came out to throw down his skills and race inspired style against the expert class, and of course the man himself, Crazy Bill Jones was running back and forth with more enthusiasm than the Road Runner blasting past Wile E Coyote.

The dampness of the weather wasn’t going to dampen the insanity of the riders. After pulling out a few szines and stickers to hand out and getting our makeshift crew setup, (which consists of turning on a camcorder and screwing a lens on a camera) Bill said let’s roll this thing and our guest judges Steve and Rod got set to check the beginners and intermediates on the course, while Mike Kuhn handled the announcing chores with his happening humor and BMX knowledge.

Beginners were up first and the class was looking pretty cool with awesome riding from these future super pros on the course, highlights included (well, you’ll see some stuff on the vimeo vid later in the month but here’s the wonderful words from the editor..)

some killer grinds by Eddie Garrison for the 4th spot,  Stephen Agans busting some nice height on the wall and some good air on the box jump, Felix Colon (not semi colon, but FULL ON Colon) busting loose on the small quarters and the wedges to the grind box for second and Jerrit Condit letting loose with x-ups on everything some nice hip transfers and a smooth as butter (that’s better than margerine folks) ice pick grind for the numerous unus. Look for Jerrit to be moving on up like the Jeffersons to the intermediate class at the next comp.

Strangely enough the intermediates just happened to be up next. In typical BMX freestyle fashion, the comp rules were changed up a bit as we were moving along to make things go smoother, originally the classes were to have 2 runs but with rain threatening the course Bill and the judges decided to bang it out with 1 run each class and if the rain held out, go for seconds after the inters….

So the announcers starts rocking the mic and the next class of freestyle d-awgs his it up.  Instead of the usual last to first write up, I’m just gonna come right out and say Tom Manna was KILLING it in inter. His tables were flattened like the dow after the house says no way to a bailout, and higher than most rock stars after a concert. The hella boost from the far right 1/4 to the wall ride didn’t hurt either when the judges decided to give out the top swag in the class. Other tricks that were looking purty beotching in the class, Steve Condit and a can can grind (can can? do we still call putting your leg over the top tube a can can?….showing the age….) as well as grabbing the tire whilst flinging himself over the jump box, also called a tire grab. (not as dramatic sounding though..) Steve got the deuce for his efforts and tech skills. 3rd place DJ Palonis was busy doing some airs on the jump box and looked nye well spiffy lads, while 4th and 5th place shredders Ben Bentidegena and Adam Urbano had the tuck no handers blasting left and right on the course. The inters did it up out there and got d-rizzled on during the final moments of their class.

Which then sent the final class of the day into question, the experts. The rain started to drizzle down during the last couple runs in the previous class and had gotten the ramps pretty damp while the beginner and intermediate awards were handed out. High level discussions were held with the promoters of the comp and it was decided that by the time we had gotten done handing out awards and laughing and telling a good 20 – 30 minutes of stories that the park was dry and ready to be ridden on again. Strange how just staying relaxed and having a good time can make things come together, sorta reminded me of a state race at EHT a couple years ago, by the time we got done talking about a cancellation, the sun came out.

So the rain stopped and the Somerville pyschos, also known as the expert class was let out to do some warming up. It was pretty apparent to all the spectators that these guys were the top dawgs as they were going higher and doing harder tricks than most of the fellers there.

The guys in this class were way holding back during practice because come money time (ok, prize time) the big gun tricks were let out. Shawn Venerable busted TWO HUGE flips out there, with one of them ending up Cru Jones style by slightly over rating. The crowd was pretty pumped on the moves though as was yours truly. Dean Watson, the winner was out there busting big airs, attempting 720’s, pulling bar spins and doing tuck no handers on every transition possible. Brandon Jones was able to pull down the 3rd spot, (That’s Bill’s kid for the undoctrinated) with some attempts at boosted double whips, whipping the wall ride and plenty of tech lip tricks and jumps. The real story of the expert class though was the battle for 4th and 5th. Burly racer dude Vinnie Mannino on a break from making Expert mains at the grand nationals was boosting the wall ride higher than anyone at the comp and was also killing big airs on the quarter and managed to stomp out a huge double whip on the jump box, on the flip side Eric Marion who’s no stranger to the local comp scene was all over the place with bar endo airs, turndowns, 360 transfers, gaps across the quarter and tech stuff just for good measure. When their runs were done the judges…well the judges ducked out and said, time for a run off, so a 3 minute winner take all jam occured and the guys got even crazier, at one point Vinnie was almost over the top of the 16′ tall wall and Marion gapped from the 8′ to the 6′ quarter. In the end though the judges decided that racers and freestylers both were rad as hell and tied them both for 4th place, thereby proving BMXNJ’s point that, it’s all BMX. Props to both these guys, you’ll see everyone’s lofty jivefullness later in the month when Dierdre’s video is online. (lofty jive….hehe, you love my 80’s lingo admit it.)

So the awards were given out, Ken Cornell’s wheel park was given back to the locals, we said our goodbyes to everyone and….headed over to Hippie Steve’s pad to check his place out. Steve has BIG plans for the ramps in his
yard and we’ll be heading up there as soon as that is together! Thanks to all the judges, ladies who took registration and the event sponsors, Efingers, Haro, Diamondback, Animal, Primo and S&M, for keeping it rocking in NJ.

Peace out BMX guys and guyettes.