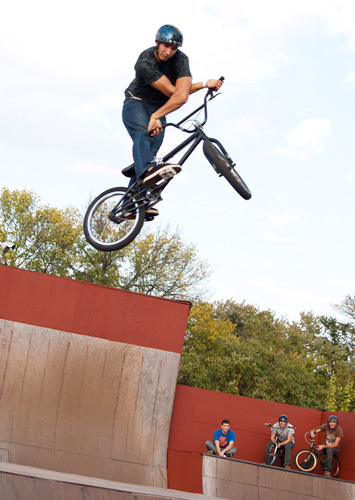 26 years ago me and my crew of crazy BMXers would bust out our rides and pedal from The Matrix (Middlesex, NJ) to Somerville, NJ to hit up one of the only bike shops in our area to keep BMX Action (my generations Ride BMX) on the counter. On the way we’d hit curbs and jump whatever was in front of us. To roll up to Somerville on the 20th and see a huge double lot of BMX bike friendly ramps was amazing. Sorta made that youth of riding BMX bikes worthwhile. brokenspokes was invited by Crazy Bill himself to come out and do some photoing and writing about the event. It was way worth the trip. The Ken Cornell Wheel Park is intense and worth the trip to hit it up. I got there about 11:00 am to find the Big G Aaron Graff on the mic getting things pumped up and a nice crew of volunteers getting things ready to rock. Ken Cornell himself was on hand to video the event for the local cable network (the DVD will also be available to the participants of the comp) and had 2 cameras working the event. Title sponsor Efingers Sporting Goods along with co-sponsors HARO, Diamondback, Animal, Primo and Stolen and Somerville Rec Dept where good enough to pony up for the goodies and insurance for the day and momma nature forked out a killer afternoon of weather for the riders.

Oh and guest celebrity judges like Al Dimino of BMX Invasion.com were on hand to be sure the event was judged fairly. (Check Al’s site for a bunch of shots by his dad of the event). Shredding freaking action? Heck yea man, the beginners were killing it great transfers like lookbacks across the hip and crazy high wall rides. Mike airing Almodovar shredded the beginner class on his bright orange 80’s throwback ride. Jerrit Condit and Rick Danielson shredded up in beginner as well. Rick even went as far as giving up his 3rd place prize package to the 4th place dude because he rides for the event sponsor Efingers, sportsmanlike thing to do, very cool. Intermediate stepped up the action and Crazy Jesse Kowalchuk rocked that class. Crazy barspin variations and inverts that were almost upside down were the order of the day. Shortly before the expert class started up the OM of NJ freestyle popped up in the rocking old school Bronco, Hippie Steve, to say hi to everyone and throw out the hugs. Steve let fly that he will be having a jam-party at his place in early November. I’ll see if I can nail down the date and keep everyone informed. If you guys remember Steve’s old Jump For Joy comps, you know this will be a Goooood time.. The expert class had no dial tone…I mean it was off the hook. 1IJoe was killing the atmosphere with height that was way too out of control. A crazy transfer from the small quarter across to the wall ride was too sick for words and the lookbacks were key licked baby. Expert saw even more crazy moves, backflips, wall slaps, 3whips, transfers from the small right hand quarter ACROSS the whole wall ride to the other side. No handers stretched like armstrong (stretch armstrong…ok, maybe if you are under 30 you might not get that…) The expert class was crazy but when the plywood settled the judges put em down with 1IJoe (Joe Cucchiaro) in 3rd, Joe Glonek in 2nd and Awesome Mike Annecchini in the numero uno spot. Realistically though every mug who competed in the X class had a move or two that made them set out from the rest. (gotta get my hands on that video!) Bill wanted to pull out all the stops for this jammie and he did BMX right by stepping it up in his backyard in Somerville. Even the mayor came out to check the festivities and was stoked on the whole thing. Thanks to Ken Cornell, the volunteers, Aaron, Bill, Al, PoppaD, all the spectators, riders, Efingers, HARO, Dimaondback, Stolen, Primo, Animal and parents who came out to support the only thing that matters in NJ. BMX. Ride on and we’ll see ya at the next comp-jam.