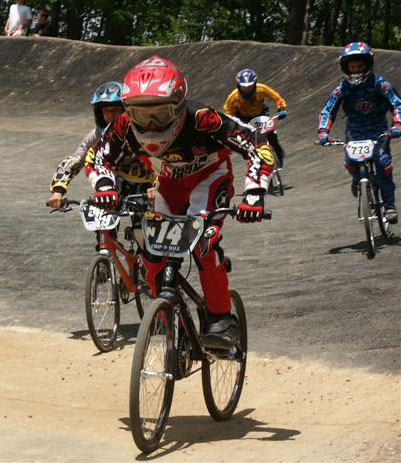 History. When a track has been around as long as CJBMX, it either becomes stale and stuck in its ways or adapts to the times and continues to be one of the best and most innovative places to race in the country.

CJBMX, started 25 years ago by Bob and Carol Gleason, and currently run by track president Scott Cranmer ,director Vinnie Mannino and their army of BMX volunteers is one of those innovative tracks. For a full 2 months before the regional everyone pitched in and got busy to get CJ up to snuff for our out of town guests. Word must have gotten out about how great the track was, because with over 500 riders combined, the CJBMX  Regional was a huge success.
The pre-race on Friday night was a pre-cursor to the weekend’s festivities as the vibe was in the air that this weekend was going to be more than “just another race. CJ made sure to kick up the fun factor for the weekend to level 12.5 and let loose with the big guns. The weekend would see more than just some of the best Regional racing on the east coast, it would also play host to a hoe down (vegetarians you may want to skip this next sentence) pig roast for the ravenous racers. Hell On Wheels BMX Freestyle team tore it up in the parking lot, after the mains Saturday, with local vunderkid Scotty Cranmer and Bronxc local Jorge Jovel, busting huge. After all the BMXitations during the daylight hours, a screen was set up next to registration and the ever classic, light on the cheez please, BMX classic, RAD, was shown. The young guns were laughing at the 80’s styles, and the old school guys were misty eyed remember their bygone youth. Great ideas to make a fun time at the races.

With all the stuff going on that was mentioned above it was almost easy to forget that their was a radical regional going on! Luckily your intrepid reporter took some time off from running his website to get a few of the massive mains down to bring back to you race hungry fanatics! Without any more nonsense, some racing highlights from the weekend!

The newest blood in the sport, the 5 & under rookies, were taken by Nick McDonald both days. Ol’ McDonald had a race and rocked the new guys! (sing the song lads and lasses!)

Stepping up the age groups, 7 rookie was tore apart by Ryan Scott over the weekend! Kyle Mehr tried to keep him honest on Sunday, but Scott was all about winning being the best policy.

A name we’ve been hearing for quite awhile in the rookie class Brandon Perez, shook it up once again and did in the 12 rookie class both days, Michael Hakes and Chris Nelson snuck in for seconds for the weekend

Rich Perrini must be running the right tires (easy, I write my own material) because he bit into the 14 rookie class across the board for double firsts that weekend.

Nervous novices, we’re seeing a lot of young guns taking the plunge and moving themselves up without waiting for move up points this year! Helmets off to those riders who step it!

6 & under novice was taken by Matt McGoey, but not without Kaleb Lochner sticking to him like sweat on a t-shirt.

9 novice main was one of the fiercest battles of the day as Steven Cheswick was chased like a maniac all the way around the track by Austin Padilla, “The Gorilla”. It came right down to the wire for Cheswick and he barely was able to keep the gorilla caged but Cheswick played zoo keeper and held on for the win.

Dakota Caulfield played bridesmaid on Saturday to Zack McLaughlin but stepped up the heat on Sunday and went all the way for first place in 12 novice.

In the highly competitive 14 novice class, Ryan Hullinger came up from Maryland and was one second place shy of 2 perfects for the weekend. Torquing Tommy Turner busted out the deuces both days!

Local boy done good, and Staples employee Michael Kouterick, flew over all the burly CJ jumps and landed himself in a 1st place both days in the 18-21 novice class. Mike is a class kid and rocks the house at CJ on a weekly basis.

35 & Over novice. Are you shaking yet? Well the people who were staying next to the triple step up were! As Crazy Craig Wilson blazed up and over the jump to fly into an RV stationed there during his 2nd moto. It was the thud heard round Central Jersey!! Craig redeemed himself later in the day by bringing home the bacon bits in the main but not without a tylenol or two.

Looking at how some of the novices were doing I think we should be seeing some new gnarly experts by the end of the season!

Ladies classes, the youngest of the young Neva “The BMX Diva” took home double perfects for the weekend, definitely future pro ladies material though she is only in the 6-7 class!

Heather Reiman came in from NY and tore up the 8-9 ladies class, with Jessica Maher hitting the seconds both days and Emilie McMurray toasting a 3rd place on Sunday.

Another Heather, Heather Haugh brought home the bacon and fried it up in a pan on Sunday in the Junior Womens class, she was second to Allison Thomas earlier in the weekend, but stepped it up to get home early the following day.

Perfection in the NBL that’s what it’s all about, perfect races. 1st in all the motos and 1st in the main. 2 riders were able to hook that up in the cruiser classes this weekend and they were at different ends of the age spectrum.

Jammin’ Jeremy Smith rocked the CJ soil for 6 firsts over the weekend between all the action and Jeff Heath stole the show in 45-49 cruiser. These guys are big time CJ locals and it shows!

7-8 expert was stomped on by Jammin’ Jeremy Smith both days, Kyle Dulock was rubbing it close to’em but couldn’t quite get past the Smithinator. Special props to little Matty Cranmer who bit it big time in the 3rd moto on Saturday but came back for the main and rocked it on Sunday as well!

9 expert was a controversial main as Zach O’Neil played rub ’em out with Mike Resz-crossup-kowski in the third turn, taking Resz off the track and out of contention. Sometimes the action takes place behind the first place riders. There’s points to be won and when you can take 2 regionals for national points it can get crazy out there!

11-12 expert was taken by Victory Behm and the long hair of air taking it all the way, but it was a tight race for third with Michael Schneider and Dylan Perez battling for it, Perez dropped a big bomb move to take over and rock the 2nd place.

8 men on the gate for 14 Expert, power skill and no fear! These guys were flying around the track with Nick Melphi flying in for 1st and Mike Campbell cranking in for the 2 spot.

The older they get the faster they fly and it was getting intense in the classes 15 and over.

In 15 expert, Weimer blazed out of the gate but Javery Hattat blew past him in the second turn and rolled himself up for a fat first place on day one!

16 expert. Jeff Tantum, BIG AIR all around the track but was snaked back to second at the line by Danny Smith.

Geraldo Echevarria went wire to wire on Saturday winning 18-21 expert and 16-29 open wheels, he was flying on that factory Felt missile. It was a trio of Jimmys that would follow him on Saturday, Moore, Mulhern and Murray in that order.

Sunday though would be a little tougher on Geraldo as Fastcat Phil Delizia went for a crazy pass over the small rollers coming out of the second turn and blazed a trail home for 1st in 18-21 expert.

35 & Over expert, the old men of BMX. This weekend it was all about Farside and Ciancio. 2 old names from the past returning to play in the big leagues once again. Teammates up till a couple months ago but still friends off the track. These guys went back and forth all weekend long. Eventually it would be Rompin’ Rich who would take the number 1 spots both days but not without Jud, Frank Young, Tom McMurray and Robbie Bennett making sure he got to the finish line as quick as possible.

There was just way to much action going on both on the track and off over the weekend, to put it all down here in a few words and photos. The atmosphere of CJBMX is very much that of the old school. You come out, you hang with your friends, maybe make a couple new ones, race your motos, give it all you have and go home smiling because you know that just being at the track gives you the biggest high in the world.

To all the racers, and parents who came out to support our “Woodstock” Regional, a profound, “hang loose and be cool” thanks! And for all the volunteers who kept us running smooth, thanks more than we can ever say, collectively we rocked the house and did our history proud. Long live BMX and may CJ continue forever!