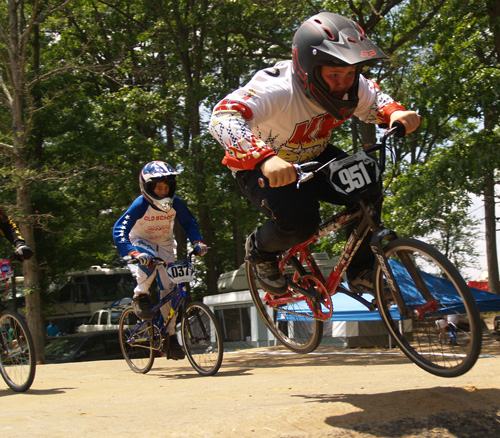 “We gotta do something to bring some excitement to this race guys. What can we come up with? Scott Cranmer and Vinnie Mannino to the crew of CJBMX last year. “Let’s not just have a race, let’s make this thing an event. How about something like the Woodstock of BMX?

Their response “Let’s do it.”

That’s how it was born, the CJ NE Regional, BMXstock. 3 days of riding, ripping and having fun on a bike. Raffles, freestyle shows, pig roasts, old school bikes rolling the pits, crazy pro action, a showing of the cult BMX classic “Rad”, all wrapped up at one of the country’s top tracks, just redone by the Ritzmeister and situated behind SC Action Sports, just reopened and reenergized by the Cranmer family for BMX riders. The vibe at the place was competitive but laid back enough for everyone to have a good time.
Rolling up for the pre-race action the place looked way more packed than the previous year. Tents were all lined up fence and campers were all over the place. Team CJS, GHP, Hyper, PBR, Point Pleasant Bikes, 3D, Edge, All American, Commitment Mortgage, Dick Sonne’s, Bulldog and others were all over the pits. This was looking to be one big regional. Unlike previous years the pre-race was nice and dry, so Vinnie and Mike’s cell phones weren’t going ballistic, with last minute help calls. No major problems at the pre-race and we were ready to roll this weekend.

The soon to be novice class, i.e.: rookie was showing some wild action this weekend. Alex McMurray, whos dad was busy ripping up 35+X, made pop proud with a 1st on Saturday and 2nd on Sunday. All in the family kiddos. Mighty Mouse, Jarret Krause doubled this weekend, so he should be looking to move up to the novice ranks soon as well. Anthony “hutchdog” Catlow also went 1 and 1 in rookie this weekend. Anthony was busting loose on the Felt this time around but he usually can be seen week in and week out on an old school full chrome Hutch. If you remember that name then you have been around awhile. Props should go to Devin Sagendorf both days as well, following in Catlow for second. Devin’s older sister has been doing a lot promoting BMX to the ladies in the NE area.

The nervous, novice class had some more great action going down. Eric Matos, bro of older brother Lee “webman” Matos held down a 1st and 2nd this weekend for the GHP crew. A name from the past, Aman, for those of you who were around in the 80’s you may remember Factory Mongoose ripper Ken Aman, his son Chris was seen hammering 1st and 2nd as well this weekend in 15/16 novice. It’s ripping to see the young blood of the first generation riders out there. Jeff Heath, and crazily enough, his dad, went 1st on Saturday and 2nd on Sunday. Synchronicity indeed.

Some highlights from the ladies classes included Shannon Walsh taking home the first in 17 over both days. The Godino gals, Cheyenne and Haley going 1 and 2 on Saturday and Taylor Farside taking the win on Sunday in a heavily combined 12,13 and 17 over girls class. Some of the best racing goes on in the ladies classes and I’m expecting all you BMX spectators to keep an eye on these classes over the next year.

The older cruiser classes were once again all about Rich Farside, even after some dicing and slicing went on during Sundays race, Ripping Rich, the driving force behind NJ’s Hyper Pro-Am series held it together to put another win in for the Goldsmid crew. A couple of other standout rides were Michael Schneider pulling in for the ace on Saturday and NY’s J.P. Pfeiffer doubling over the weekend.

Experts? Yea, the bad boys of BMX were in full effect this weekend and after filling up on the roast and hitting the track here is the cream of the cropness. Massive, (ok, maybe he’s not that massive, but he is only 9) Matty Cranmer pulled down the double firsts this weekend, Matt is little bro to Scotty Cranmer, so the BMX stuff runs in the family. Paul Filippone also did firsts Saturday and Sunday in 11 expert. The 3rd place finisher in 11 expert on Saturday, Mike Reszkowski, saw his placing improve on Sunday, with a win in the uncombined 10 expert class. Mike was also SKYING all weekend long and the crowd was very approving of this little dude’s aerial assaults on the track. The biggest class by far this regional was the 17-21 expert class. Anyone who says BMX is just for little kids has not been watching the INTENSE racing action going on in this class the past year. Them fellers are nutso. (Um, to quote my south jersey cousins.) Matt Kelty took care of the class on Saturday but 3rd place finisher and World Championship qualifier Dan”The Ladies Man” Smith would come back on Sunday and slip in for the win. Jimmy “moore air” Moore was also looking stylish this weekend on and off the track, kicking wheels on the Expedition proved that James not only has the taste in autos but his 2nd place finish on Sunday showed he has the kahoneys to roll deep in the hardest am class out there. Elite open got a rest this weekend as Phil Delizia was off making waves in Rockford Illinois. The rest of the fastest men on the east coast got a schooling by Allan Currier of Connecticut with Stephen Oldham and AJ Bontorno following him to the line. Crazy speed and mad skill were the perfect capper to another 3 day BMXfest at the new HQ for BMX in NJ. To all the riders, parents, volunteers and BMX nutcases who came out once again for our BMXstock regional, we just want to raise the glass of thanks tons and we hope to see everyone back next year for round 3 of BMXstock in Central Jersey. We haven’t run out of ideas yet and we’ll have even bigger stuff planned next year. PS: If you had a good time at the Regional come on back for our run at the Hyper Pro-Am series on August 18th and 19th. There is extra cash being thrown in the pot both days.