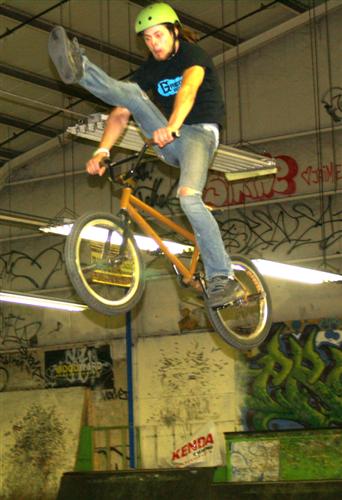 Refreshing. Rolling up from the Jersey Shore to check Al D’s BMX Invasion Comp numero 7 and all I could think of on the way back was, refreshing. Refreshing to see Al D, rolling about the arena making sure things were running well for the riders. Refreshing to see Aaron Graff massaging the microphone to keep people pumped up on the days festivities. Refreshing to see riders as judges, riders promoting their products, riders in control of the whole dang shebang. The freestylers have got it going on, the event was chill and people were going off even with tons of riders and spectators in the place not a hassle was to be found. Props have to go out to Al D’s Dad, who is one super mellow and cool parent, pulling a quote from the main man, “We’re all about the underground guys, ya know, the kids, the guys who get no recognition.” That’s very cool to hear from a parent, means a lot to a guy who’s been around for a long time. Alright back to the event. I got there just in time to see the novice class kick off and it was crazy. The BMX Invasion Comps are run jam format, which means you bring out 5 guys, they do their thing for 3 minutes while the judges scorasize the contestants. After you get through all the riders, they then run a final with the top 10 riders. Crazy! So much action going on at once that for photogs and video maniacs it’s a field day! The novice class saw some crazy high boosting going on. Tailwhips. Transfers. Enough grinds to bring every security guard from every mall in america to their knees. The rippers in the this class will be moving on up to Expert soon enough. 3rd place bomb dropper in nov was Rob Hamlen, who shredded the course with crazy jump variations.

2nd went to Crazy Connor McVoy, but the number one was brough home to Busted Bikes blazer, Eric Marion. This kid was dropping from the sky like a freestyle bomb all over the rest of the class and should be looking to make the move up a notch to X at the next major comp. Not to dis the rest of the riders in novice but Eric tore the place up. The next shredders were the Expert class. I think the trick of the day in X was HUGE TRANSFERS. Some of these biking stunt nuts were sailing gaps that would make a few of the pros nervous. Whips from the spine to the jump box. FAT 180 transfers from the big deck spine to the small deck. Attempts at flair transfers from 1/4 to the wall ride. These lads were getting bizay like only guys crazed on Monster Energy drink could, lol! If I had know more of these guys names I could have been tossing them all out there, but whoever the dude was that KILLED that superman whip took my award for trick of the expert class. SUPER extended, totally rocked the house. It was also cool to see some of the older crazies out there like Brett Downs doing the flip for the old boys and Carl Davies busting loose with a decade jump. By the time the finals rolled around though t his is how the judges saw the class lay out, 3rd- Dan Foley, 2nd- Brian DeMattio and the gold to Nikki Gatarz. The last class to hit the ramps for the day were the Pro maniacs. With names like Reynolds, Mast, Brennen, and Groff on the course, you know sheeot is gonna get… well not what the masses would call “sane”. What were the pros getting up to? Well front flips at one time were reserved for the “big” names, well these guys were busting them loose all over with Ohio native Craig Mast letting loose with one over the spine. I didn’t get to hang out for the pro shredaholics but that was the word brought down from Al D. Al also wanted to give props to Sonny for pulling his first ever flair, in the pro ranks, OVER the battleship ramp. The pros went 3-2-1 in this order, Sonny, Rob Groff, and spine flipper Craig Mast for 1. Yea..it was pretty refreshing to be around a bunch of people who believe in, support, and ride BMX with no other interest than to make the whole thing bigger and better for the average rider. All the sponsors, BMX Legend, the Mullaly Crew, J-Mac from Bulldog, all the spectators, Big Dad-D, Dirk Lesco, the video maniacs on the floor getting the footage, every single rider and of course Skate 57 for letting BMX Invasion…invade, you all rocked the great north woods of NJ and brought some heat to this winter day. Al says BMX Invasion is heading to the west coast for the next jammie but brokenspokes will be waiting here in NJ for the next round. Thanks to BMX Invasion for letting me come out and take pics for the site and NJBMX Szine. In fact one of the guys from this comp will be on the cover of the April issue. The results are below along with about 35 shots from the comp. There will be more in the next issue of the szine, but for now…it looks like 2007 is gonna be one insane year for every aspect of BMX in New Jersey. Thanks guys, now get riding ya freaks!