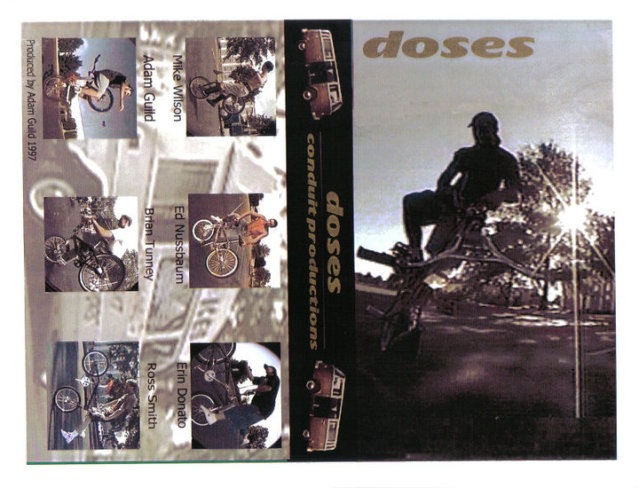 (aside from Brett- Louis was trying to post this last night but due to our change over to the correct web address BMXNJ.com, he was having some difficulties. I got this dropped in my email inbox this morning with some pics attached and the main flat writer for NJ asked me to get this on here, I of course obliged and here we are. A bio about Adam is elsewhere on the site, this however is about the NJ videos….Doses)

Okay, I guess we’ll start with the basics, name, age, years riding, how you got into riding.

Adam Christian Guild, 38, and 27 years riding. I got into riding back in the early ‘80’s. I broke my arm at age 11 and learned how to ride backwards with a cast on my arm. I was

Nice, now you’ve been known for producing the Doses Videos during the mid-to late 90’s how did you get into filming?
Some of my early riding buddies like Jay Schullman used to tape back in the early ‘90’s. When I moved back from California in 1997 I sold an extra Big Daddy I had to Bob Ryer and bought a video camera. I really didn’t know how to produce a video so I bought some video maker magazines, went into debt and bought a title maker and a VHS editing deck. I already had a DJ mixer so the audio part was set, I made the first Doses edit in my ex-girlfriends room, there was electronic equipment and wires all over the place, so much easier today to edit on the computer.

I could imagine. So, once you got a camera did you bring it with you every session and try to capture anyone’s riding on film?
I bought a bunch of blank tapes…one for each person and several with mixed. This way it would be easier to edit after the fact. Most Doses sessions were one on one someone riding, me filming, less distraction that way.

How did you get someone to film you, I noticed you rarely used a tripod, it seems.
There was a kid up the road from me Mike Kays. He used me for photography projects when he was in high school. He skated and did a great job of filming my parts. There were several times I actually ran into him during filming because you never knew what direction I’d be going next. Most of my links are just improve nothing set in stone until it happens

Oh wow, that’s awesome. I can’t film something unless if I know what I want to do.
That’s why I think I have Alzheimer’s or dementia already. I will watch an old video of me and say, “When the **** did I learn that?”

Haha, it’s really cool that you can do that; I don’t know anyone who does that in their riding.
It’s much more fun just to be spontaneous.

So, what made you want to make Doses? What was your main point on making those videos?
I was sick of the NJ riders getting no props. There were guys out there not even half as good as some of the Doses Crew, yet they got free everything. Not sure how much it helped, but I assume the videos helped somewhat. At that point I had an entire room full of bike parts and really wasn’t concerned with getting anything else. I had so many flatland part hookups it was sick. I mean Ross Smith is probably one of the best flatlanders ever, more original than almost anyone I have ever seen and he was still buying stuff from mail order places. I had originally intended there to be 8 sections in Doses.

Wow, that’s insane. Who was the easiest to film and the most difficult to film?
Mike Wilson was easy. He usually pulled every link within one to two tries. Ross was easy but I wanted more footage than I was able to get. I wouldn’t say anyone was difficult. I did try taping Josh Crossman, BUT HE DIDNT REALLY TAKE IT SERIOUSLY. It’s a shame too, because he had some really awesome links.

That sucks, so who was originally supposed to be the 8 sections in doses. And what I meant by difficult, was, who took the longest to land their links.
Adam Guild, Mike Wilson, Ed Nussbaum, Brian Tunney, Ross Smith, Erin Donato, Jay Jones, and Rodney Morweiser. We rarely all rode together but that was still an amazing group of flatlanders to ride with. Everyone was pretty dialed.

Nice, so how come Rodney, Jay and Ross didn’t really have a full part? Were they done with riding already?
Rodney was usually with his woman. Jay and I hung out almost everyday after Doses was made. He was big into surfing and also into college education. I think Ross had a full part. His stuff was just so difficult and done so quickly most people were

kind of baffled by it. Ross moved away before I ever got a chance to film him for Doses Two. I still cant do any of his stuff

So after Doses came out, how did you sell it and did you get any reviews or negative vibes from people?
I traded a lot of them to Swap Meet; it was a mail order place in Northern California. Andrew Arroyo ran it. Chad Johnston and I would also trade videos, like he would send ten Linkt, I would send him ten Doses. Erin and Ed also use to sell them at contests for gas money and ****. I never intended on making money, that wasn’t the goal. Just getting the word out. Some people hated that most of the backgrounds were the same.

What do you mean?
Or it was all flatland but hey that’s what we did. I added street and changed scenery in Doses Two. In Doses Two, Frank Lam, Jim Dellavalle, and a few others have street clips. I tried to changed riding locations also. There aren’t enough flatland videos today, I think the web killed it.

Yeah, I was going to ask you that, what do you think of some of the videos that are put out today like Déjà VU and Same Thing Daily 2?
I think a whole video of one guy is too much. Danes videos rock. Old school flavor in his videos, its not just spinning and pumping that **** gets real old to watch. I really liked Elusion. It was great quality and wasn’t all just the best riders It was like a bunch of great riders, some newbie’s. I just loved the quality and production that went into it.

So, would you consider yourself the pioneer of NJ filming?
Nah, I had a dream, I just wanted my friends to get what they deserved. I’m pretty self-critical so I don’t think my videos were great but they did have a lot of heart behind them. I mean I was a flatlander not a video maker.

Yeah, I love watching Doses. I’ve stayed up super late watching them over and over again.
I used to do that with Dorkin videos, we all need motivation.

So after does 2.5, why did you stop making videos?
Lack of riders. Erin, Ed, and Ross were all in California. My son was born in 2000.

So, now that you’ve put all of your footage on the Internet, do you ever consider putting Doses 1, 2, and 2.5 on DVD with all the extra footage you have as bonus material?I have thought of it. I think I would rather do a best of DVD, try to compile more older footage and get new footage from anyone still riding.

That would be a great idea.
When I do put them on DVD, it will be a real limited amount.

Have you thought at all about doing a video of the newer generation of riders from NJ?
Would be cool but a difficult job since I’m 800 miles away.

True, well if you ever came back or something.
Would be nice to ride with people. Been long time since I’ve actually seen anyone else ride in person.

How was the editing process for the videos?
1n 1997? Long, tedious, analog, hi 8, camera, SVHS editing deck, two CD players, DJ mixer, and a title maker (KEYBOARD CONTRAPTION) CABLES EVERYWHERE. Did the best with what I had.

So how long would it take you altogether to make the videos with the editing, the filming, and everything else in between?
Countless hours. I couldn’t even imagine a total. Almost every session from 1997-1999 had a video camera involved. I would estimate at least 100 HOURS to make Doses.

What was your technique for filming?
The filmer needs to keep moving, nothing worse than a clip with the filmer standing still. Skateboards were a big help and riding along side people works too. Wide-angle lens is a must.

Nice, nice. Well I don’t have any more questions for you, so I guess this is a thank you section.
Well first I’d like to thank you. Through Doses I reached at least one person that appreciates what we all went through. I’d also like to thank everyone involved in the making of Doses Erin, Ed, Mike, Rodney, Jay, Ross, Brian, Tony, and Mike Kays.