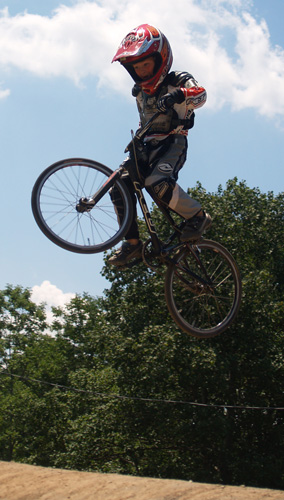 Massive Mulhern, Tractor Transue and Digger Dan Smith were rumored to be busting their butts the last couple weeks getting HCBMX in Flemington ready for the State Qualifiers. Well it really wasn’t a rumor, Jim pretty much said so himself last week in the forums. The man wasn’t boasting. The downhill track was looking re-energized and ready to be rocked on by NJ’s best. The last straight rhythm section was completely redone and the entire track was completely de-quarry dusted. It looked like this weekend would be a rocking one for the BMXahs of NJ. Of course the weekend wouldn’t be complete without a little controversy. The wonder mouth, Dave “Caveman” Kapigian was not being heard through the PA system. In fact the PA system wasn’t even being heard. Seems HC couldn’t get power over to the announcer’s tower for the new PA that the state bought and wasn’t up to the task of trying to get it there. Some frantic scrambling by Bill “Wildman” Hayden and suddenly the system was heading down the hill with Cavey in tow.

They set it up right next to the fence and ran the cord right next to it. Well, once the PA was hooked up the whole mood of the day changed. It’s amazing what some good tunes and some rocking from a good wordsmith can do for a BMX race. Unfortunately at this race, Caveman announced he was retiring from the BMX world. Dave has been involved in BMX racing for over 22 years in NJ and has been the premiere announcer in the state for a looong time, at one point he was even asked to be the official state series announcer. Dave will be sorely missed and the state series and Hyper Pro-Am series will not be the same without him busting chops and making everyone feel at home. Hasta la vista Caveman…you’ll be back…hehe. Now for the guys who are sticking around for all the BMX craziness they can get. Eric Yuhas and his busted foot was fully in effect, Y-dog had the grill humming all weekend long with burgers for not just the GHP crew but anyone who rolled by and wanted a quick snack. He was the burger king and of course you could have it his way. His son was busting large in his class this weekend, rolling at the front of the pack and looking smooth as was most of the GHP dudes and dudettes. Team PBR was in the house but TM Legend was on bike shop duty this weekend. His lady however did a killer job taking care of the teamsheets this weekend, taking care of picking the right riders because it is now a tie for first between the BMX rebels Team PBR and the Factory Looking Boys of Team GHP- Atomlab Northeast. Actually the top 3 teams in the state this year are all newbies including the #3 (by only FIVE points) team, SC Action Sports. Scott Cranmers boys are creeping in there. Vinnie “The Man” Mannino and Dale Meghan pulled me to the side during the race though and said I better mention Point Pleasant Bikes only being 175 points behind or there will be “repercussions”. Dales way bigger than me and well….Vinnies Italian and I know all about the Sopranos so…Be on the lookout for PPB later in the season. (Relax everyone I’m just joking about the stuff above…JEESH!)
The middle aged maniacs of the cruiser classes, 35-39, had some intense moto action this weekend. One moto had Chris “80’s style” Whiley, Pete “I’m going low and you’re going high” Wohlgemuth, and Chris “damn these guys” Drozak, battling back and forth like it was the final pro-main of the ABA Grands and the #1 pro title was on the line. Racing like that makes the kids take notice when it’s basically their dads out there shredding. Props to the cruiser crazies this weekend double that because no one went home busted. 13-14 cruiser saw Victor Behm and Slick Nick Jones exchange bikes in their last moto so Behm could blast the doubles on Nick’s cruiser. They stopped just before the third straight and traded bikes back. Obviously a couple guys who know it’s all about fun and being with your buds. Alex McMurray came in with a deuce in the 8 novice class tying up the finish that his dad had behind Farside in 35+expert. Rich was even able to beat the #2 ranked expert in the state Ant-Boom-Dog Brown. Mike Reszkowski was SKYING as usual in 10 expert with Matty Cranmer following him in for 2 this weekend. Mike is looking to be a candidate for future freestyle stardom as well with the amount of air he gets.The Pro-Am Open was a little distressed this weekend. The Dragon Man Philly D Delizia was in the house. Phil is really getting into the game as he was seen sporting the MCS gear and even riding with the 999 plate this weekend. This mans been getting so much press lately between Plus and World that he should be making mucho photo contingency cash. What was actually going on in the open class? Well the points leader Matt Kelty was not up in the hills this weekend so the points chase was opened back up. Jeremy Knapper is now looking to be the man to beat on in the series. Ladie’s Man Smith was looking hella fast this weekend as was the man who spent the last 2 weeks getting the track in shape. Jim “Earth Mover” Mulhern. Phil Delizia took home the top dollars and all the points this weekend in the Pro-Am series but was kept super honest by Bob “They call me MR.” Whipple, who nailed down 2nd on Saturday and 3rd on Sunday. The Ladies Man was looking wicked smooth in his run up for World Championship glory and popped out with a 4th and 2nd. The racing actually looked completely INSANE because the dust was blowing up from these guys and it looked like they were all ripping out with the nitrous. Pro story of the weekend? Slim Tim Sullivan finally decided to put on some clips and take control of a few points in the series. Tim made the main both days and crept into a respectable 5th place against the toughest comp in the area. Tim also has a smile that makes the gals melt which explains why he was out so late Saturday night. Look for video of the races and some pro pics on newjerseybmx.com next week. The HC crew stepped it up a notch with the track and things are looking good for the championship and Pro-Am series final in October . So be sure to tell everyone you can that they should get on out to Flemington NJ and scope the last race this October, dang, there should be a letter writing campaign to Hunterdon County itself to tell them how much the BMX track has been appreciated over these past 28 years. Rock on HC and the crew of crazies running that place.