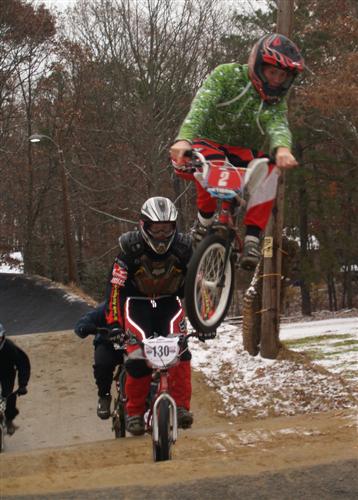 Rain, snow, chilly weather. Helmets, prizes, smiling BMX mugs, pit bikes and $850.00 simoleans in the Pro-Am must mean it’s time to wrap up the outdoor season in New Jersey and run The Iron Man Classic. Last year the chief injuns at CJBMX decided to name what had become the great giveaway back to the Iron Man Classic, well this year they went one step further and pushed the race back to the first weekend in December. That extra couple weeks gave us the perfect weather for the Iron Man. I believe it was the first time that CJ diehard Vincenzio Mannino had a smile on his face as the snow and drizzle came down on CJ. Judging by the rider turnout you would never guess that we were getting real late fall early winter weather, ’cause the Iron Man race was up from last year by about 25 riders. So big props to all the die hard dawgs out there kicking it on the moistness of CJ. The thing that really makes the Iron Man standout is that no one walks away empty handed at the race, thanks to the event sponsors, SC Action Sports, Base Brooklyn, Point Pleasant Bicycles, CJS Skate and Bike, Nestle, Fly Bikes, The Catlows, Bridge Autobody, SR of Lakewood, The Incline Club, Vans, Brick Bikes, The Inner Net Computer Store, Salad Works of Toms River and Fox,

everybody gets something, but the big winners are always the guys and gals who win their class and get the helmets. With SC Action Sports now the bike shop in front of the track, and a resurgence of people interested in BMX racing, the racing was fast and splashy…splashy? Puddles man, with the new tech of seal coating the track, we had puddles and were able to hold an event that otherwise would have been real messy. The pit bike open was a new addition this year and a big hit with all the racers. The small bikes were getting a workout and it’s almost amazing that those midget race machines can hold it together on the new school jumps. The usual suspects were attacking it out there, names like, Dulock, Catlow, Heath, Mulhern, Cranmer, Hatem, and Godino were all attacking the wetness of CJ and shredding it. Even Jim Rempkowksi who has spent the summer moving on down south rolled back up to sport the number 2 plate for the Iron Man and was back giving Big Jeff Heath, some heat all day long. The crazy old lads keep getting faster and faster. Most of the NJ state teams came out for one last blast. CJS, GHP, Point Pleasant Bikes and SC Action Sports were all blazing throught the day. With CJS getting pointed out by top 30-34x Dale Maghan. The big race of the day as it has been all year long was the Pro-Am Open. With CJ putting in $500.00 dollars and a $35.00 dollar entrance fee with 10 riders meant a $850.00 purse was up for grabs with the older guys. 2 racks of crazy brought a gate of eight to the finals. The guys kept it in check for the main and made it around the track for one last 2007 blast, Weimar was kicking some big style over the slick jumps and led the charge to the finish line. Mulhern was rocking the GHP but couldn’t put the moves on The Ladies Man to move up past third place. Vinnie Mannino, the PPB rocket rolled in mid pack for 4th place. With the Pro-Am run at The Iron Man, the capper was put on another season of racing madness….um, emphasis on madness, in NJ. 2008 will bring the Olympics to BMX racing and a possibility of another huge money race series as well on the national and international scene. In New Jersey, 2008 could bring the best racing action in a looong time. Time will tell what the deal wheel be but the staff at brokenspokes thinks the racing world is about to be turned around. See everyone in 2008. (Oh and when you hit up CJ in the spring be sure to grab a 2007 Iron Man T-Shirt)