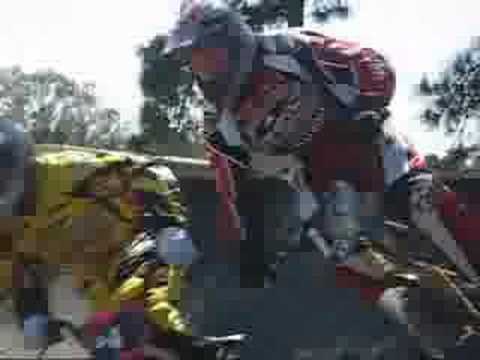 Finally, some time to report on the ABA’s Gator Nationals in Oldsmar, FL from last week. People in Florida were complaining about the cold but those of us from the Northeast thought 60 degrees resembled a heat wave. Sunday was cold and windy. We’ll give them that. It was a small one at only 88 motos because of an NBL state qualifier nearby. Enjoy the pictures and videos as we show you what went down on the track and off…

Some guys that were missing were Will Hunt in 14X and Mike Kapes in A pro. Word is Mike Kapes and Barry Nobles are going for the NBL state championship in pro. Mike told Barry he would be at this race but then didn’t show so Barry was in Oldsmar on Saturday but then went to the NBL state qualifier for Sunday so as not to let his lead slip away.

#9 is Dover, DE boy Austin Loebe who just turned 14 and is having a tough time in the new class. That’ll change when he grows another five inches in three months. 5th on Saturday was the best he could do. The blur on the left is PA boy Buck Taylor who got 2nd on Saturday.
You know those live streaming videos from the ABA nationals? This is the setup. Buck Taylor is obviously crying over his 2nd place finish. That’s okay, he got the win on Sunday.

Anthony Derosa was in town and didn’t see second place all weekend. First in class and cruiser both days.

ABA photographer gets a shot of Anthony Derosa. Think it’ll make the cover?
If you ask me there’s no reason for any other energy drink besides Monster but Bawls is pusing hard into BMX so I figured I’d give it a try and see what Bawls tastes like. I told TJ Taylor I’d never tasted Bawls so he asked if I wanted to try his so I gave it a sip. I’m not down. Not down with Bawls at all. Bawls sucks. What? Was it something I said?
#6 is another Dover, DE boy Matt Kelty chasing down Lea the flea Lewis. Remember the video of the kid that loses his chain and still wins his semi with mad skill? That’s Lea. On Saturday Kelty was chasing him and was going for a move in the last turn that probably would have gotten him booed had it worked but he was carving too hard and went down. I’m sorry I missed it but Kelty won on Sunday and won open both days.
Cheyene Algier making the main while #258 is about to get his shoulder rearranged
Me and the president of the ABA, Clayton John. He should be smiling, he’s gotten more money from me than I’ve gotten from him over the past 22 years. He’s a good guy that know’s what he’s doing and puts on a good race.
Ladies and gentlemen, perhaps the greatest mullet of all time. Now let’s see if you can match this bad to the bone dude with his vehicle.
If you said the minivan, you were right!
Domingos Lamoglia didn’t make the main. Neither did Otis.
Vet Pro is my class so my coverage may be skewed towards that class. So sue me. Jason Carnes and Todd Parry have been battling heavy for a few years now and after the first two mains on Saturday they were tied for points but bad things happened to Mr. Parry in that third main.
Vet Pro Saturday Main 1

After a bit of straightening this is what Parry’s bars looked like
Percy Owens. 32 and still racing A Pro and killing it with a third and a second for the weekend. Nobody could handle Mr Upshaw though

You know that guy Michael Prokop who kills it on the Jeep king of the mountain series? He always seems to show up at the Florida races. This is his bike. Those are some funky tubes up front. Author is a Czech company but even they have their bikes made in Taiwan and it weighed all of about two pounds. The only chrome moly on this bike is the bars and some axles.
There were only 11 AA Pros in attendance and on Saturday it was Javier Colombo with wins in the first and third mains.
AA Pro Saturday Main 1

Sunday was cold and windy and to get people out of there quicky the pros ran only one main on Sunday. Check the videos to see who won.
Vet Pro Sunday Main

It was a good time but they need to move this race to March next year.
The Florida State Fair was going on the same weekend and boy was that colorful. You can check that out here if you care to.

Now back to 25 degree weather.