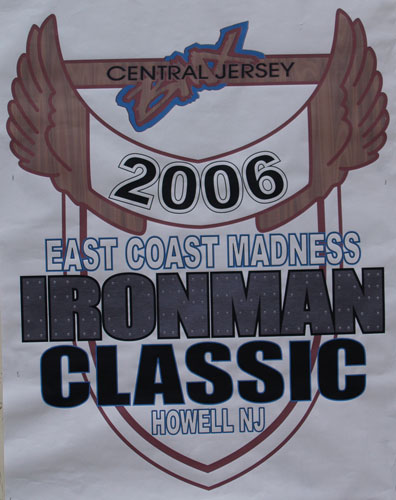 In 1981 Bob and Carol Gleason, the owners of one of the largest bike shops in NJ, Bicycle World and the founders of CJ BMX in Howell, NJ took the advice of one of their employees and started what would become one of the most anticipated races of the year on the east coast. The Iron Man Classic. The idea was to have a big race “party” at the end of the season before everyone would head indoors to the Jersey City Armory for the winter. For $25.00 simoleans a racer would get a custom Iron Man plate made at that time by the legend Bob Haro himself, a small goodie bag of stuff, and if you placed top 3 in your class a brand new helmet. Giveaways were also done throughout the day and most everyone at the race walked away with something from that as well. It was for all intents and purposes a Christmas Party for NE BMX riders. Over the years the race would grow and the legend of the Iron Man would continue. At one point the plates, which were numbered as deep as the amount of participants would go all the way up to 450. That is a lot of riders for a local race. For a dark time in the late 80’s the track would close but the memories would live on, and when CJ BMX returned so did the Iron Man.

Even current ABA rep, Bill Curtin raced the famous race. Those were the times when the word impossible was not heard in the realm of BMX racers. The Iron Man would continue until the Gleason’s retired from BMX in 1998. An end of the year race would continue at CJ but it would become called the Great Giveaway and would lose much of the glory of the days of the Iron Man. That would all change this year with the 25th anniversary of CJ and the return of many of the men who remembered those days of the 80’s. Track director Vinny Mannino after listening to guys like Dale Maghan, Rich Farside, yours ugly, um truly..Brett, decided to give it a shot and try to pull together the helmets, prizes and promotion to once again run a true Iron Man Classic. Lisa Heath got together with J&M Printing in Pt. Pleasant to get everyone a number plate for this year (the plates went up to 149 a very good sign!) very cool! Iron Man t-shirts with the logo shown to the side and all the sponsors were made up for the event. These t-shirts are still for sale just email Lisa Heath with your shirt size!  Prizes were brought in by Rich Farside from great companies, like HARO, Snap, Tangent, GHP, Hyper and many others were also contributed by friends of the Cranmers and Rob Bennett, as well as Chip & Dale Bikes, thanks Andy! After a slight delay and a quick show by the pro open class of the day the races got underway. CJ pulled out all the stops and ran the race old school style making all classes run 3 motos and then also having to run a main! And let me tell you come main time those riders were pushing each other hard for those noggin buckets!

The am classes looked to be having a great time all day till main time then it all got real serious real quick. Some highlights, Jimmy Moore “air”, stomping 18-21 expert. Steve Weimar ABAing all over the 17 expert class. Chris Hammertime Haugh took care of 22-34 Expert. The old men got the geritol cases out and had Pete Wolgemuth take back a case of helmets from 35 expert and 35-39 cruiser. Rich Farside smiled for the camera and a new helmet, and jamming Jeff Heath took the win and a new skullbucket in 45-49 cruiser. Stu from HRP designs hooked up Rich with some cool Iron Man Classic plates for the winners of the trophy dashes. What the heck is a trophy dash you say? Back in the early days of BMX the winners of the 14 over classes were grouped together in a final race for 1 first place trophy of the day. To win this race at a local or a national was considered to be the MOST prestigious race of the day to win. Why because you were racing the winners of 14,15,16 expert and novice and the winners of the 14-15 and 16 over open. At that time the classes ended at 16 expert, believe it or not 35 over expert is a new idea. For the Iron Man they also decided to run a cruiser trophy dash as well, taking the winners of 30-34 cruiser, 35-39, 40-44, 45-49 and adding in Susie “you lose” Levan and Brian fast Farro. For the 16 over trophy dash “wheelie” gate Weimar let the nibbler riders know what the ABA was all about by taking home the plate with the Haughinator coming in behind him and James “no my dad’s name is not Roger” Moore. The guys though a little confused at first over what to do, seemed to be real stoked on the idea of “racing the best of the best”. Who won cruiser? Hyper’s secondary NJ factory ace for ’07 Rich Farside. It was fitting to have Rich take the dash plate at the newly reinstated Iron Man as he was the hero of the 80’s. It was almost like all the best stuff of the golden days were returning right there with Rich. What was the race of the day? The stomper? The one that had mom and dad and all the kids standing up and cheering for their particular hero? 16 and over money open! With names like Kelly, Smith, Moore, and Delizia on the gate it was sure to be a race to make you salivate! The gate dropped and the race was tighter than a clams a**! Snapping out of the gate it was a tight race with Delizia and Harley Kelley close up and tight once again. Almost a rematch of the Veterans Day showdown! Over the triple step up and heading into the almost off camber 3rd turn and it was Delizia out front with Harley hot on his clips. So crazy and so fast that my head was twisting like a top trying to watch and take video at the same time. I spin around just to find cool as ice Kelley’s front wheel washing out in the CJ sandy loom dirt sending Harley sliding and rolling across the perm (paved berm) and half the rest of the pack finding various pieces of Harley’s body to slam into. I believe Ecchevaria got the first bite into the H-Bomb, but he would not be the last. Phil at this time was long gone and with a lot of the pack making an acquaintance with the 4th turn pavement, it was time for the ladies man Dan Smith to take a nice sizeable chunk of the second plate bucks home with him. The race was incredible to watch and was a good sign of things to come in NJ. Harley was down on the ground for awhile but was seen back up and in the center of the track taking care of the cuts on his BMX motor, also known as the human body, later in the afternoon. Major props to a man who can take a digger like that get back up again and keep on smiling. Racing, crashing, custom plates, helmets, prizes, smiles, laughs and good times. It’s beginning to look like BMX racing may just have turned a corner and dropped the gate on a new and incredibly positive direction here in NJ. If the drive and motivation of the riders and everyone involved in NJ BMX continue heading in this direction the word impossible will be stricken, once again, from the BMX vocabulary. CJ says thanks to everyone who came out for the race, the volunteers and Bob and Carol Gleason for starting all this 25 years ago. Dang,  a quarter of a century of BMX radicoolness. What could top all the events of the past year, more video? a fall series? a P.A. system on par with the NBL’s? a pro-money open series for the state next year? Sounds impossible? Sorry everyone we changed the state by-laws to drop that word from BMX. Welcome to the new age of BMX. Ride on.