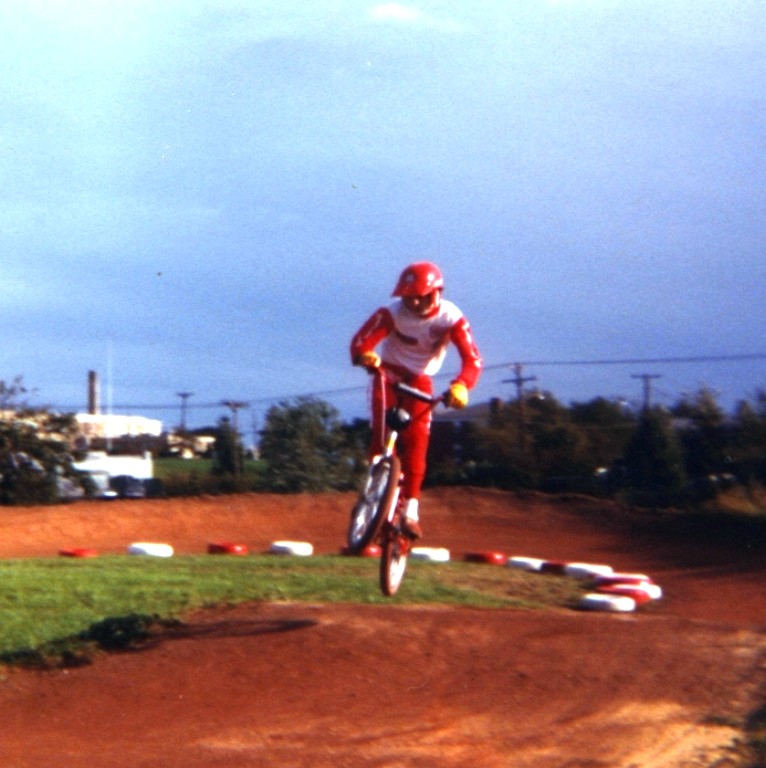 I wander into a local deli/newsstand, and there on the magazine rack is a magazine with a picture of a little car, stuffed with 20″ bikes.. It’s name is Bicycle Motocross Action. Needless to say the issue was snagged immediately and my brand spanking new Raleigh Grifter, looked pretty damn lame compared to the bikes in the magazine.

After reading that mag about a million times, I decide it is time to save the old allowance and start begging the parental units for a new bike….the at the time state of the art Mongoose Motomag. Well around this time, my Dad was working near Flemington, NJ and had spotted this little bike shop named Pete’s. Off to the side of this shop was this oval dirt track where they had…BMX races! Just like in the magazines! Well me and a few friends started heading to the track to get a feel of this whole dirt racing, starting gate thing and finally signed up to race beginner at the track. My first race was great!, a second place ribbon..(beginners only got ribbons at that point) and I was hooked. Of course after that race it was downhill, mediocre finishes and no dang trophies! But the feeling of riding that bike could not be beat and I kept going over the next couple years just on the love of riding that bike!

Trips to Flemington, Lawrencville, and Howell were plentiful over the next couple years, and the beginning of freestyle was also taking hold with me….curb endos, bunnyhops and the like.

Most of my friends were kicka** local and national riders, all from Middlesex, NJ. Danny Notte, Gary Sherayko, Glen Mattioli. These guys were pushing riding to the limits and most of them were getting full on sponsorships.

Heading into the early 80’s, the sky was the limit as far as BMX and NJ was concerned, where the NBA and NBL started everything, the ABA would begin to take root in about ’81 and huge nationals and local events would begin to dominate.

Bicycle World’s CJBMX Track was host to several HUGE NBL Nationals, at one point bussing riders in, after running out of parking space there. The ABA was kicking it with a few East Coast Nationals at Braddock BMX and a annual winter gathering at the Jersey City Armory put on by JV Bikes was an event never to be missed.

In NJ these were the golden growing days of BMX, all the guys who were pushing the sport back then deserve a lot of credit for going out there and making achange in the “popular” sports of the day.