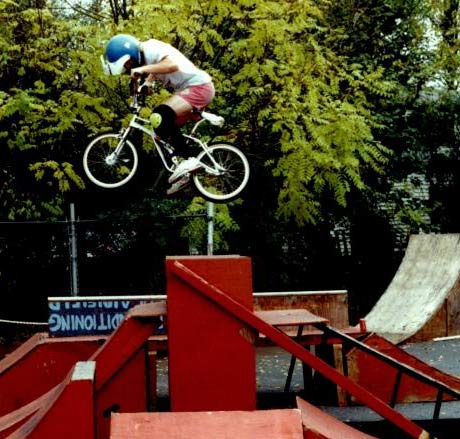 It was late in 1989 and the General days were over…actually freestyle itself was sorta waning in the national eye and began to go “underground”. The only people left riding were the guys who only did it for one reason, the love to ride. During this time in the Central NJ area the “sport” was being kept up by me and a few friends with the contests of the NJFL and the South Plainfield Ramp-Ateria. Myself, Eric Fleming and this one other guy, kid actually, whom I met just out riding in Dunellen one day, ran some pretty heavy underground contests back in late 1989 to about 1991. This kid was Joe Doll. Joe wasn’t your average new rider on the block, he was really hardcore….only 14, looking like he was 18-20, smoking, one of the new “bad boys of BMX”. Joe was a little rough around the edges and let’s just say he was quite the ladies man, but when it came to helping out building ramps, running contests, and doing shows Joe was top notch and totally dependable. His size, go for it attitude and well…lack of fear, led him to be one of the dominating guys at the Ramp-Ateria. (The young punk taught me to do 360’s!) Joe would pick up variations like nothing and was the first guy I ever saw 360 a subramp. He did a few shows with High Voltage during the Eric Fleming era, we even tried to get him to go with us on the NBL National Series in 1991 but Joe’s home life was, at times, a little rough and his High School football coach was a little “overzealous”. We were out riding in front of my house one time when this “jock head” coach rolls up and says to Joe, “I know you like playing with these little bikes, but if you want to be the best football player you can, you need to get in the gym this summer”. Needless to say Joe took the football more seriously than the bikes. (To Joe’s credit, senior year, Dunellen’s team won their divisions State Championship) Though if Joe had taken freestyle seriously instead of football he would have been one of the men of today’s X-Games, no doubt in my mind, he was a natural bike rider.

So it was with great despair that I learned that Joe had left for that big ramppark in the sky last week. After he stopped riding, Joe got mixed up in a few bad things and was occasionally having a hard time, but he was always a stand up guy. He leaves behind 2 cool kids and the legacy of keeping freestyle BMX alive when alot of people had given up on it. Pictured to the side is a bunch of pictures of him riding and a write up in the local paper about his performance at the local street fair.

In my mind, Joe will always be a might have been, lots of untapped potential and talent. He will be missed, but not forgotten. ESPN, the new school riders, and freestyle itself, owes alot to guys like Joe, hardcore fellas who do what they do for the love of it and nothing else.

Ride On friend,  word has it that Charlie Huber has some great ramps built for ya, tell him I said hi.